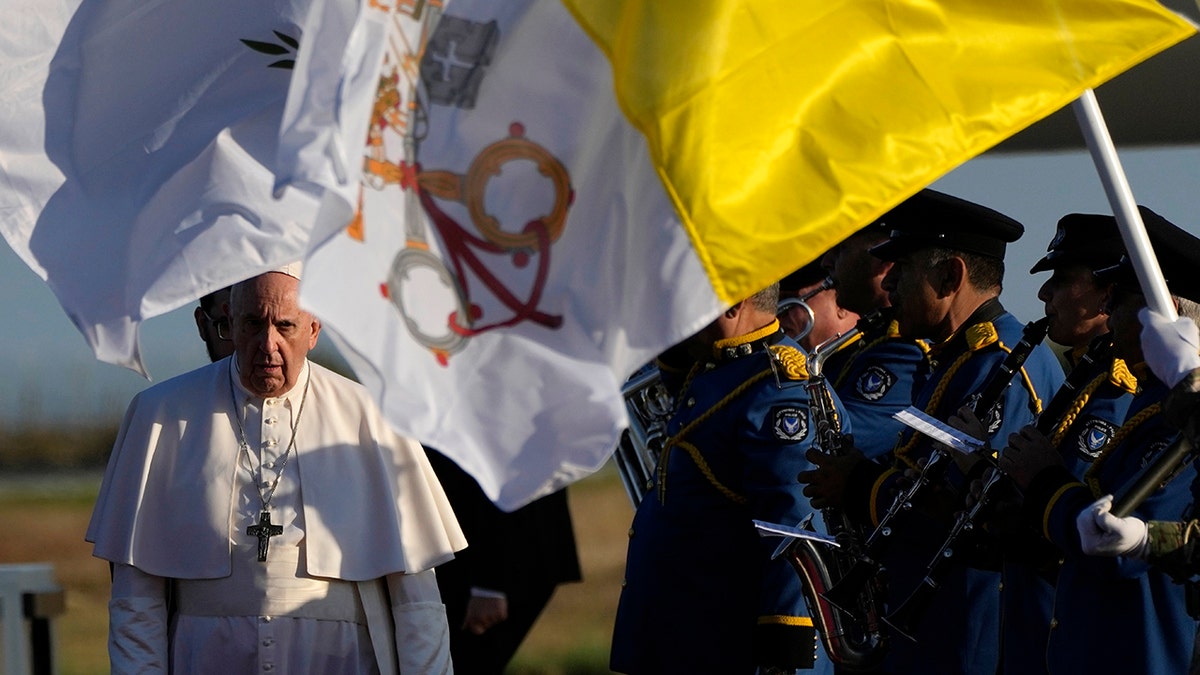 praised the “mosaic” of Cyprus’ multiethnic people as he arrived Thursday on the ethnically divided Mediterranean island and urged it to welcome migrants and heal the divisions that have lacerated the country for nearly a half-century.

Francis opened a five-day trip to Cyprus and Greece by drawing attention once again to his call for Europe to welcome migrants. It’s an exhortation that is frequently falling on deaf ears as countries on Europe’s borders increasingly shut their doors to newcomers fleeing war, oppression and poverty.

Francis is expected to echo the call when he returns Sunday to Lesbos, Greece, where he made headlines in 2016 when he brought a dozen Syrian refugees home with him aboard the papal plane. Francis is arranging a similar transfer this time around: Around 50 migrants in Cyprus have been identified for transfer to Italy, though they won’t join him on the plane home but will be resettled in the coming weeks, Cypriot officials say. 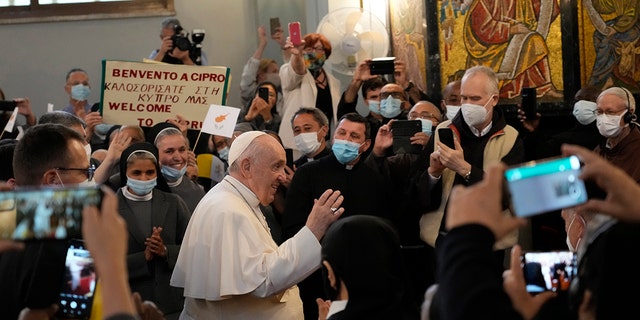 Pope Francis arrives to attend a ceremony at the Maronite Cathedral of Our Lady of Graces in Nicosia, Cyprus, Thursday, Dec. 2, 2021.
(AP Photo/Alessandra Tarantino)

Upon arrival in Nicosia, Francis recalled that migrants had enriched the island’s faith communities, who are dominated by Orthodox Christians but also include Maronite and Latin rite Catholics. A weary-looking pope made his first stop at the Maronite Cathedral of Our Lady of Grace.

“This face of the church reflects Cyprus’ own place in the European continent: it is a land of golden fields, an island caressed by the waves of the sea, but above all else a history of intertwined peoples, a mosaic of encounters” he told the gathering of Catholic leaders.

Cyprus has seen such a spike in migrant arrivals this year — a 38% increase in the first 10 months compared with all of last year — that it has formally asked the European Commission to let it stop processing asylum claims altogether. It has more migrants per capita than any other European Union nation.

In a sign of the importance of migrants for the trip, Francis met with a group of asylum-seekers at the Vatican and another group near Rome’s airport before boarding for Cyprus. The Vatican said some had been part of the group who accompanied Francis to Rome from Lesbos in 2016.

In war-divided Nicosia, Francis will immediately come face-to-face with the reality of the island’s ethnic cleave, which is also helping to fuel its migration influx. Francis will be staying in the Vatican nunciature, or embassy, which is located in the United Nations-controlled buffer zone that divides the Greek Cypriot south from the breakaway Turkish Cypriot north.

Cyprus was split in 1974 when Turkey invaded following a coup by supporters of union with Greece. Only Turkey recognizes the Turkish Cypriot declaration of independence in the north. U.N.-led efforts to resume reunification talks are proceeding at a snail pace amid a Greek Cypriot rejection of the Turkish Cypriot call for a two-state deal. 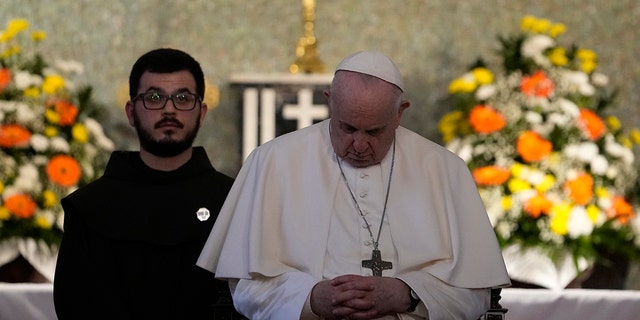 Pope Francis attends a ceremony at the Maronite Cathedral of Our Lady of Graces in Nicosia, Cyprus, Thursday, Dec. 2, 2021.
(AP Photo/Alessandra Tarantino)

Francis is expected to call for a resumption of talks during his meeting later Thursday with Cypriot leaders.

Around 80% of all migrants in Cyprus first arrive in the north and then cross the porous U.N. buffer zone to seek asylum in the internationally recognized south, which is a member of the European Union. The Cypriot government claims that Turkey systematically sends asylum-seekers to the north so that they then pressure the island’s southern government.

Among the possible candidates for transfer to Italy after the pope’s visit are Grace Enjei and Daniel Ejuba, two Cameroonian asylum-seekers who crossed from the north about six months ago and , where they have been living in a tent ever since.

“If help can come from anywhere, I will grab it,” Enjei said on the eve of Francis’ arrival. “And if I’m given the opportunity to like, make a choice, of course, anywhere in Europe will be OK.”

She and Ejuba said they paid hundreds of euros to someone in the north who showed them the way to cross through the U.N. line six months ago. They would face deportation if they returned to the north, but have been blocked from crossing into the south amid Cyprus’ crackdown on migrants, which has recently included a 27.5 million-euro ($31.8 million) deal with Israel for a camera system to monitor the 180-kilometer-long (110-mile-long) buffer zone.

Despite the precarious life they are living in a tent on the U.N. green line, Enjei says remaining in southern Cameroon wasn’t an option: Her home was burned down and random shootings and violence made her flee. 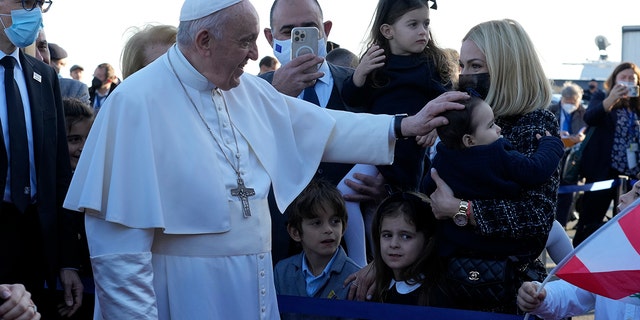 The visit comes amid new pandemic travel bans across much of the world due to the omicron coronavirus variant first detected in South Africa.

The pope, who turns 85 on Dec. 17 and has only part of one lung, although he is fully vaccinated. He generally eschews face masks though he wore one on the plane trip to Cyprus. Asked what if any precautions had been taken to protect him and others during the trip, Vatican spokesman Matteo Bruni said “prudence” as well as prevailing health pass requirements that are in place in most of Europe.

Cyprus has in recent weeks seen a spike in daily COVID-19 infections, which on Thursday prompted authorities to mandate PCR tests for all arriving passengers as of next week, on top of compulsory mask-wearing and weekly testing for schoolchildren over 6, as well as the cancellation of all Christmas events.