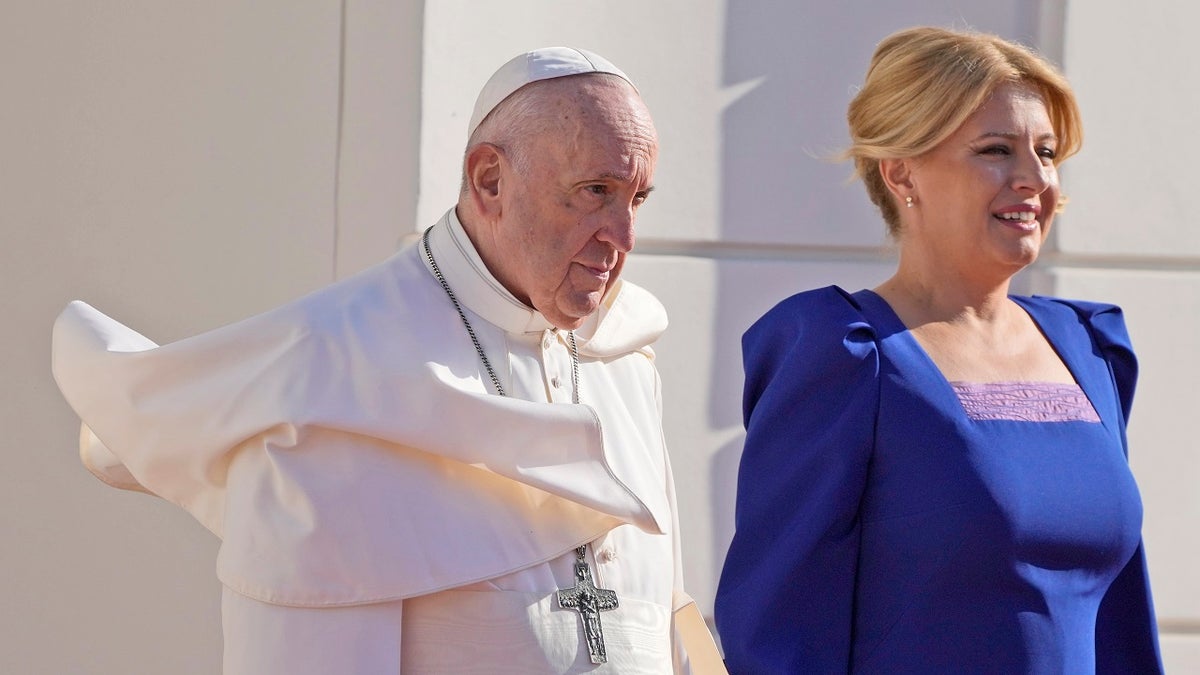 Pope Francis cracked jokes Monday and took an ambling walk to greet well-wishers as he opened his first full day in Slovakia in good health and spirits ahead of a solemn encounter with the country’s Jewish community.

Francis arrived at the presidential palace, and later at the capital’s St. Martin cathedral, looking rested and energized on the second day of his four-day pilgrimage to Hungary and Slovakia, which marks his first international outing since undergoing intestinal surgery in July.

“I’m still alive!” Francis quipped when asked by an Italian journalist how he was feeling as he walked up a ramp into the cathedral for a meeting with Slovak priests and nuns, where he cracked a series of jokes in a sign he was in good spirits. 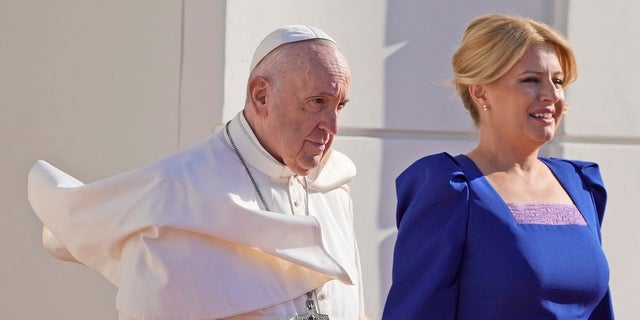 Francis, 84, has been recovering after having 13 inches of his colon removed for what the Vatican said was a severe narrowing of the large intestine. He has seemed in good form, though he used a golf cart buggy indoors on Sunday during a rigorous few hours in Budapest to limit a long walk, and has been delivering some speeches sitting down.

But he stood for a long time to greet priests and bishops — nearly all of them maskless — at the end of his meeting. And he then took an extended walk around the cathedral piazza to greet pilgrims, clearly enjoying the welcome and enthusiasm of the crowd after the coronavirus put a stop to his global travels for over a year.

At his first stop of the day at the Bratislava presidential palace, Francis told President Zuzana Caputova, Slovakia’s first female president, that the coronavirus pandemic had been the greatest test in recent history, but that it should offer a lesson for the future.

“It has taught us how easy it is, even when we are all in the same boat, to withdraw and think only of ourselves. Let us instead set out anew from the realization that all of us are frail and in need of others.”

Ahead of a rigorous two days hop-scotching around Slovakia, Francis is spending Monday in Bratislava where the highlight of his visit is an afternoon encounter at the capital’s Holocaust memorial, built on the site of a synagogue destroyed by the communist regime in the 1960s. 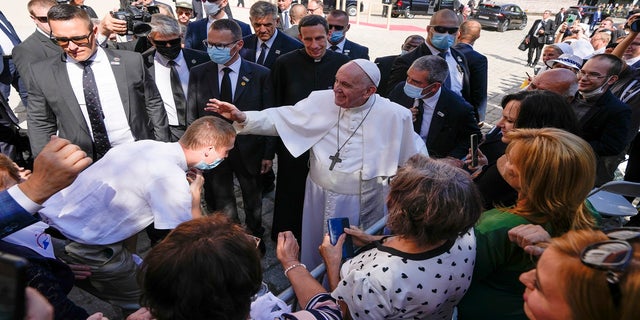 Pope Francis blesses an unidentified man as he greets the crowd while leaving the Cathedral of Saint Martin, in Bratislava, Slovakia, on Monday. (AP)

He goes into the event having called on Sunday for Christians and Jews to work together to stop the rise of antisemitism in Europe, saying it is a “fuse which must not be allowed to burn.”

Slovakia declared its independence from Czechoslovakia on March 14, 1939, and became a Nazi puppet state with politician and Roman Catholic priest Jozef Tiso becoming the country’s president.

Under his rule, the country adopted strict anti-Jewish laws and deported some 75,000 Jews to Nazi death camps where some 68,000 perished. Tiso was sentenced to death and hanged in 1947.

Now, only about 5,000 Jews live in Slovakia, a largely Roman Catholic country of 5.5 million currently ruled by a four-party center-right coalition government.

Just last week, the government formally apologized for the racial laws that stripped the country’s Jews of their human and civil rights, prevented their access to education and authorized the transfer of their property to non-Jewish owners.

Marking the 80th anniversary of the “Jewish Code” adopted on Sept 9, 1941, the government said in a statement Sept. 8 that it “feels a moral obligation today to publicly express sorrow over the crimes committed by the past regime.”

The code was considered one of the toughest anti-Jewish laws adopted in Europe during the war.

Slovakia is now home to the far-right People’s Party Our Slovakia, which has had members in Slovakia’s Parliament since 2016. The party openly advocates the legacy of the Slovak Nazi puppet World War II state. Its members use Nazi salutes and want Slovakia out of the European Union and NATO.