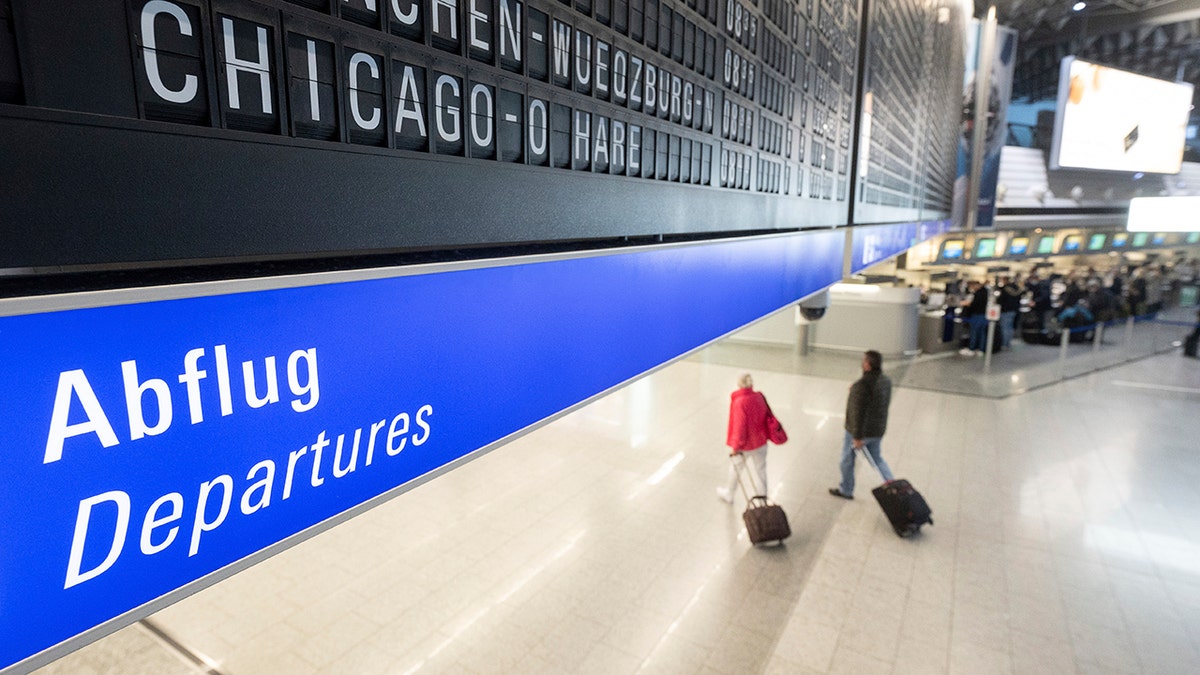 Countries around the world have enacted numerous travel restrictions in an effort to curtail the spread of the COVID-19 omicron variant as it rapidly becomes the dominant strain in South Africa.

Around the time the World Health Organization (WHO) identified and named the B.1.1.529 as “omicron,” several countries enacted travel bans to countries in southern Africa. The U.S. on Wednesday confirmed its first case of the omicron variant in an individual who returned from South Africa to California.

Some officials, such as U.N. Secretary-General Antonio Guterres and WHO Director-General Tedros Adhanom Ghebreyesus, criticized the strong and sudden response for “one part of the world” to lock out others in response to new information.

OMICRON VARIANT IN THE US: WHAT WE KNOW

“I am equally concerned that several member states are introducing blunt, blanket measures that are not evidence-based or effective on their own, and which will only worsen inequities,” Ghebreyesus said of travel restrictions.

But as more cases of omicron variant arise, countries do not seem intent to slow down and will instead reinforce travel restrictions as the omicron variant – which appears to have greater transmissibility – spreads.

Here are the current travel restrictions due to the coronavirus.

Angola banned travel to the eight southern African countries, in addition to Tanzania and Mozambique until Jan. 5 2022.

The government on Nov. 27 issued new border restrictions in the eight southern African countries. Anyone who has been in those countries and is not an Australian citizen, permanent resident or immediate family member of such will not be able to enter the country.

All Australian residents and citizens arriving from those countries must observe a 14-day quarantine and a 72-hour quarantine from any other country.

Austria had suspended all tourist travel starting Nov. 19 as the country grappled with a sharply rising number of cases. The government planned the restrictions to end on Dec. 13 “at the latest,” but will now revisit the restriction in light of the omicron variant. 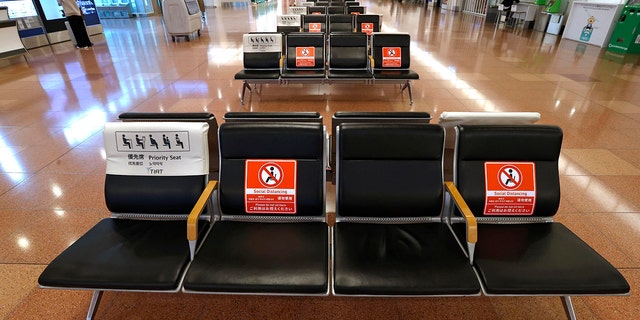 The arrival lobby of the international terminal  is deserted at Haneda Airport in Tokyo, Japan, Tuesday, Nov. 30, 2021. Japan confirmed on Tuesday its first case of the new omicron coronavirus variant, a visitor who recently arrived from Namibia, an official said. Japan announced Monday it will suspend entry of all foreign visitors from around the world as a new coronavirus variant spreads.
(Shinji Kita/Kyodo News via AP)

Brazil has closed its borders to six of the southern African countries: South Africa, Botswana, Eswatini, Lesotho, Namibia and Zimbabwe. Officials provided no timeline as to when the restrictions might end.

Any foreign travelers who have been in the southern African countries after Nov. 12 will not be allowed to enter the country. Canadian citizens or residents who have been to one of those countries must provide a negative PCR test in order to board a flight to Canada and take another test upon arrival.

They must then quarantine until a negative result is confirmed and must quarantine a further 14 days.

French authorities added the southern African countries to its “red list,” which only allows travel for emergency reasons. Travelers from these countries must present a negative PCR test taken within 48 hours of departure, a new test upon arrival and a mandatory 10-day quarantine supervised by government agents.

Germany banned all flights from the seven southern African countries and Mozambique.

The government will not grant entry to any Foreign nationals who traveled to any of the eight southern African nations, as well as Hong Kong, Angola and Zambia. Indonesian nationals who arrive from one of those 11 countries will need to quarantine for 14 days upon arrival.

Travelers arriving from any other country will need to quarantine for up to one week – an increase from three days the government had required most recently.

International travelers arriving in India will need to test if arriving from “at-risk” countries. Anyone arriving from a country that has confirmed an omicron variant case will need to submit to a PCR test on arrival and receive results before departing the airport.

The country has not yet banned travel from any countries. 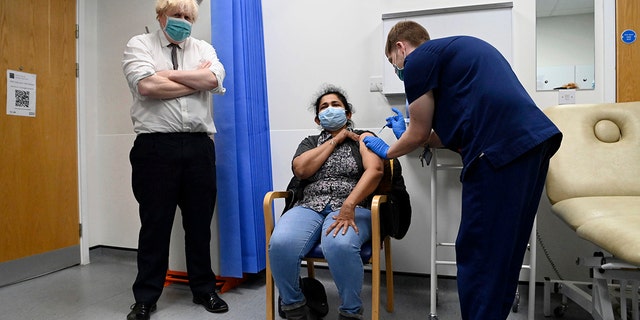 British Prime Minister Boris Johnson, left, watches as a patient receives a COVID-19 vaccine during his visit to the Lordship Lane Primary care center where he met staff and people receiving their booster vaccines, in London, Tuesday, Nov. 30, 2021. The coronavirus’s omicron variant kept a jittery world off-kilter Wednesday Dec. 1, 2021, as reports of infections linked to the mutant strain cropped up in more parts of the globe, and one official said that the wait for more information on its dangers felt like "an eternity."
(Paul Grover/Pool Photo via AP, File)

Ireland also urged individuals traveling from the southern African countries – except for Malawi – to not travel unless for “emergency cases.” Irish citizens or EU citizens and legal residents remain exempt from entry requirements.

Israel banned all foreign travelers for 14 days starting Nov. 27 to stop the spread of the omicron and introduce new phone-track technology to trace people have likely been infected.

Health Minister Nitzan Horowitz said the restriction is temporary and the government will not “automatically” extend it.

Italy has restricted travel for anyone traveling from the southern African countries and Mozambique in the previous 14 days.

The Japanese government issued a travel ban for visitors from the eight southern African countries as well as from Angola and Zambia – even if they have permanent residency in Japan.

The country has also banned entry to any foreign national without permanent residency in the country. Officials plan to introduce more severe quarantine measures that would require any nationals or foreigners with permanent residency to isolate for up to 10 days in a government-designated facility.

Malaysia has temporarily banned the arrival of any traveler from a country that has confirmed a case of the omicron variant or has a “high-risk” designation. The government will also not allow passengers who originated from one of the eight southern African countries but connected through another country to enter Malaysia.

Residents returning to Malaysia from the southern African countries must observe a mandatory 14-day quarantine in designated government facilities.

The Netherlands has banned all incoming flights from the eight southern African countries until Dec. 4, at which point it will revisit policies. The ban does not apply to Dutch nationals or foreign nationals with residence in the Netherlands or an EU national in transit to their home country.

Exempted travelers must show a negative PCR test before departing for the Netherlands and must quarantine upon arrival. 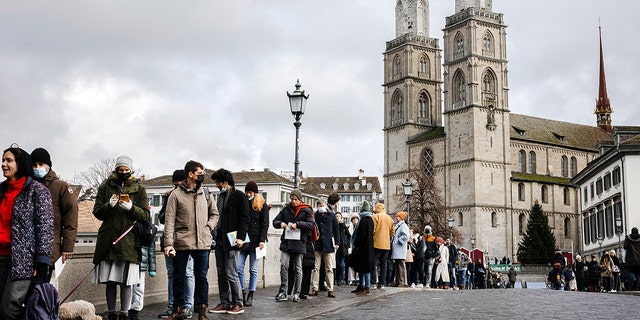 People queue from the Muenster Bridge to the Zurich City Hall to cast their ballot at the City Hall polling station to vote in a COVID-19 referendum, in Zurich, Switzerland, Sunday, Nov. 28, 2021. The coronavirus’s omicron variant kept a jittery world off-kilter Wednesday Dec. 1, 2021, as reports of infections linked to the mutant strain cropped up in more parts of the globe, and one official said that the wait for more information on its dangers felt like "an eternity."
(Michael Buholzer/Keystone via AP, File)

Norway will require all travelers to provide a negative test within 24 hours of arrival, regardless of vaccination status.

The Philippines banned travelers from 14 countries across Africa and Europe until at least Dec. 15. In addition to the southern African countries (excluding Malawi) the ban includes Austria, the Czech Republic, Hungary, the Netherlands, Switzerland, Belgium, and Italy.

Travelers arriving in Portugal will need to show a negative test, even if they are vaccinated, regardless of their point of origin or nationality. The test needs to have happened within 72 hours (PCR) or 48 hours (Rapid Antigen) of boarding.

COVID CASES DOUBLE OVER 24 HOURS IN SOUTH AFRICA, WHERE OMICRON VARIANT WAS DISCOVERED

Starting Nov. 26, Singapore restricted all incoming travelers including returning residents to a pre-departure test and on-arrival PCR testing. Any residents arriving via an approved vaccine travel lane – or air corridor – will need to also test on the third and seventh day after their arrival.

Should anyone test positive with the omicron variant, the National Center for Infectious Diseases will observe their isolation and recovery. Anyone with close contact with a confirmed omicron variant case will need to quarantine at a designated facility instead of their home.

South Korea added entry bans for the eight southern African nations. Vaccinated travelers from other countries must submit a PCR test result on arrival, then take a second test after arrival and self-isolate until they receive results. Any negative result requires a further test after six or seven days.

The Spanish Ministry of Health added restrictions to travelers from the southern African countries – except Malawi. Anyone who returns to Spain after staying in one of the seven countries will be required to present a negative test result taken within 72 hours before arrival.

Rapid antigen tests are also valid for entry, but the test must not be older than 48 hours. 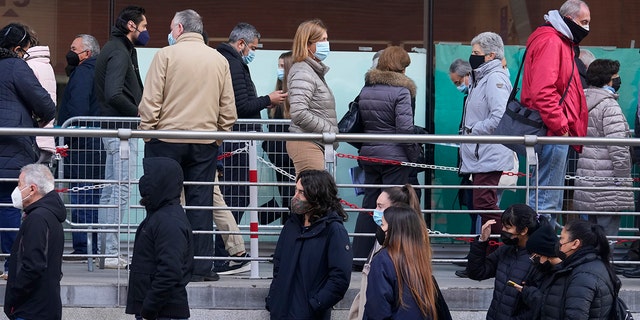 People queue for Pfizer COVID-19 vaccinations in the Wizink Center in Madrid, Spain, Wednesday, Dec. 1, 2021. Health authorities in the Spanish capital have confirmed a second case of the omicron coronavirus variant in a 61-year-old woman who had returned from a trip to South Africa on Monday.
(AP Photo/Paul White)

The Thai government banned travelers from the eight southern African nations starting Dec. 1 and limited travel from other African countries after a 14-day quarantine and three negative PCR tests.

The U.K. added South Africa, Botswana, Lesotho, Eswatini, Zimbabwe and Namibia to the “red list,” which requires quarantine for 10 days upon arrival regardless of vaccination status. The government will deny entry to any non-citizens from other countries who have visited a red list country.

Anyone arriving from any other country must provide a negative PCR test by their second day in the country. Any positive test will result in a necessary 10-day quarantine.

The U.S. issued Level 4 travel advisories for the eight southern African nations on Nov. 26, but those restrictions do not apply to U.S. citizens, lawful permanent residents and certain other categories. Following the confirmation of the omicron variant in the U.S., the Biden administration expanded the restrictions to require all incoming travelers to provide a negative test within 24 hours of travel – either a PCR or Rapid test – and for unvaccinated individuals to quarantine for at least 7 days after arriving.