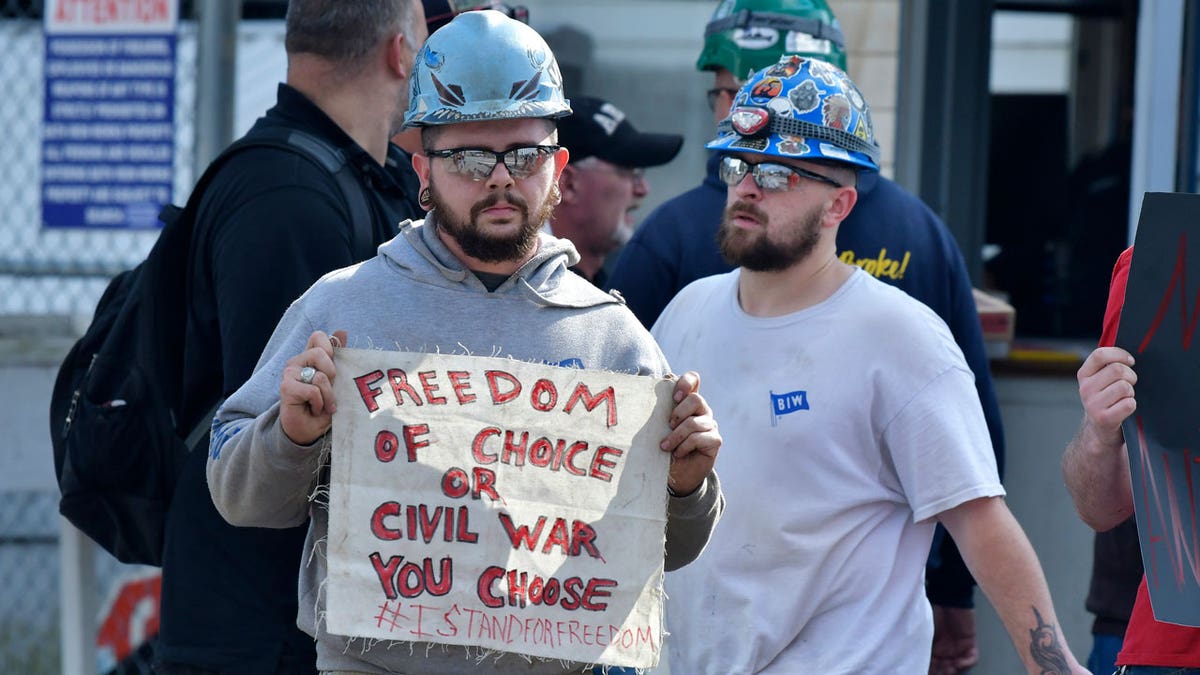 Josh “Chevy” Chevalier is a third-generation shipbuilder who hasn’t missed a day of work during the pandemic in his job as a welder constructing Navy warships on the Maine coast.

But he’s ready to walk away from his job because of an impending mandate from President Joe Biden that federal contractors and all U.S. businesses with 100 or more workers be fully vaccinated against COVID-19.

“People are fighting for their constitutional rights — the way they think their life should be,” said Chevalier, one of hundreds of employees at Bath Iron Works threatening to leave. 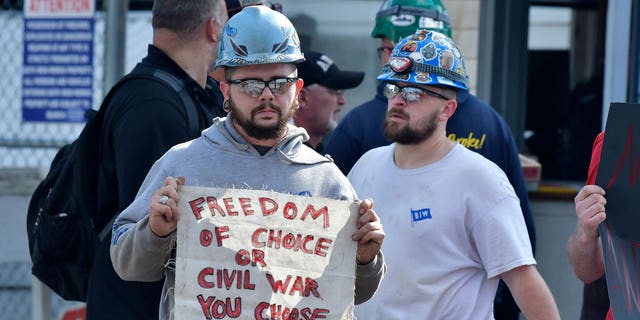 DR. SAPHIER: CHILDREN HAVE BEEN ENOUGH BY LOCKDOWNS. THINK TWICE BEFORE MANDATING A VACCINE FOR KIDS

Chevalier is among a small but significant number of American workers deciding whether to quit their jobs and careers in defiance of what they consider intrusive edicts that affect their freedoms.

The Biden administration, public health officials and many business leaders agree that vaccine requirements are legal, prudent actions necessary to help the world emerge from a pandemic that has killed more than 700,000 Americans and nearly 5 million people worldwide.

The defiant workers make up a small fraction of the overall workforce, with many cities, states and businesses reporting that more than 9 out of 10 of their workers are complying with mandates.

But they have the potential to create disruptions in a tight labor market and have become the latest roadblock in overcoming the vaccine hesitancy that allowed the COVID-19 crisis to take a devastating turn over the summer. In many cases, the reasons for the objections are rooted in misinformation.

The refusers come from all types of occupations — defense industry workers, police officers, firefighters, educators and health care workers. In Seattle, a group of city firefighters turned in their boots at City Hall on Tuesday to protest a vaccination requirement.

Thousands of people have sought religious or medical exemptions that were rejected; others won’t stand to be told what to do and have quit or been fired.

Nick Rolovich, the football coach at Washington State University, was let go from his $3.2 million-a-year job on Monday, along with four assistants. Rolovich, the first major college coach to lose his job over vaccination status, claimed a religious exemption but has declined to elaborate. He is suing.

The conflict over mandates is likely to grow in the coming weeks. The Biden administration is expected to move forward any day with the mandate that employers with 100 or more workers require all employees be vaccinated or undergo weekly testing, though enforcement likely won’t start for several weeks. The rule for federal contractors goes into effect in December, with no testing option, but many businesses, governments and schools are already implementing mandates.

The U.S. Chamber of Commerce and other groups that represent large employers have warned workers might simply migrate to jobs at smaller businesses where they don’t face vaccination requirements. That could create challenges for large retailers going into the holiday season, among other disruptions, the chamber warned. 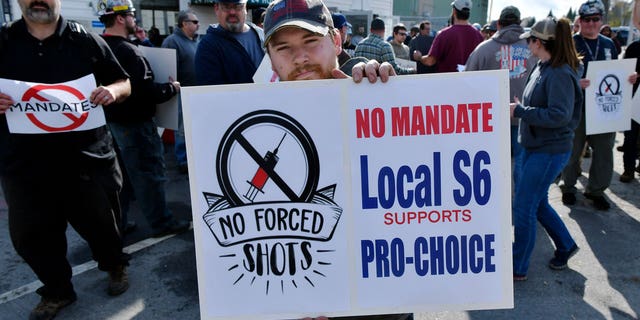 Individuals who’ve left their jobs and are seeking work that doesn’t require vaccinations are sharing information on social media. Small employers looking for workers are turning to online job boards such as RedBalloon, where employers sign a pledge that they won’t make vaccines a condition for hiring.

Andrew Crapuchettes, RedBalloon’s founder and chief executive, said he started the online job board more than two months ago for people “who just want to work and don’t want to get into politics in the office.” More than 800 companies have posted, and more than 250,000 people have visited the site, he said.

Some states, including Texas, Montana and Florida, are gearing up to fight or undercut the Biden mandates. Texas Gov. Greg Abbott issued an executive order Monday barring any entity from requiring vaccines.

Florida Gov. Ron DeSantis said Thursday he will call a special session to pass legislation to combat vaccine mandates, saying that, “in Florida, your right to earn a living is not contingent upon whatever choices you’re making in terms of these injections.”

Melissa Alfieri-Collins, a 44-year-old mother of two, said she resigned from her job as a nurse at Jersey Shore Medical Center in Neptune, New Jersey, rather than undergo regular COVID-19 testing.

She said the hospital recognized her request for a medical exemption, but she objected to the requirement that only unvaccinated people get tested, arguing that even vaccinated people can spread disease. 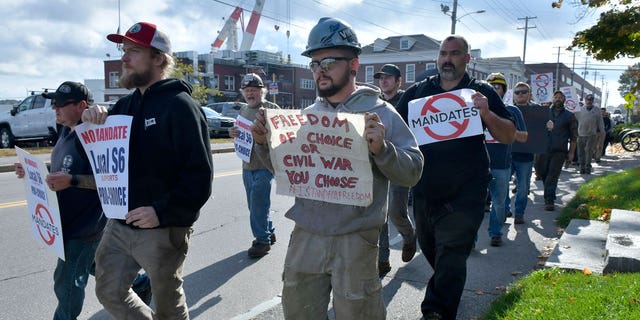 FLORIDA FIRE CHIEF: I WAS FIRED FOR REFUSING TO ENFORCE ‘UNLAWFUL’ VACCINE MANDATE

“My family and I, we had a long talk, and I basically don’t want to compromise my values any more,” said Alfieri-Collins, who hopes to become a nurse practitioner and pursue her own holistic practice.

“I am very sad because I am the type of nurse that loves my patients and my patients love me,” she said.

Anthony Polenski, director of strategic partnerships for tech recruiting company Jobfuture.ai, said he’s seeing candidates who want to know, “Will this company force me to take a jab?” Polenski said they are often leaving previous employers because of a vaccine mandate.

“They don’t want their vaccination status attached to their employment,” he said.

At the shipyard in Maine, frustration is rising among union members.

On Friday, some 100 shipbuilders gathered outside the shipyard during their lunch break to protest being forced to get vaccinated. They marched down the street, holding signs decrying the mandate and using choice four-letter words that made clear what they think of the president and his vaccine mandates.

The union fears it could lose more than 1,000 workers, or 30% of its membership, over the federal contractor mandate.

Dean Grazioso, a 33-year Bath Iron Works employee, said he’s not anti-vaccine but that he knows vaccinated coworkers, friends and family members who’ve contracted breakthrough COVID-19 infections. Such infections are rare and vaccinated people who get COVID-19 usually have mild symptoms and are far less likely to be hospitalized or die.

The 53-year-old is still deciding whether to get the shot.