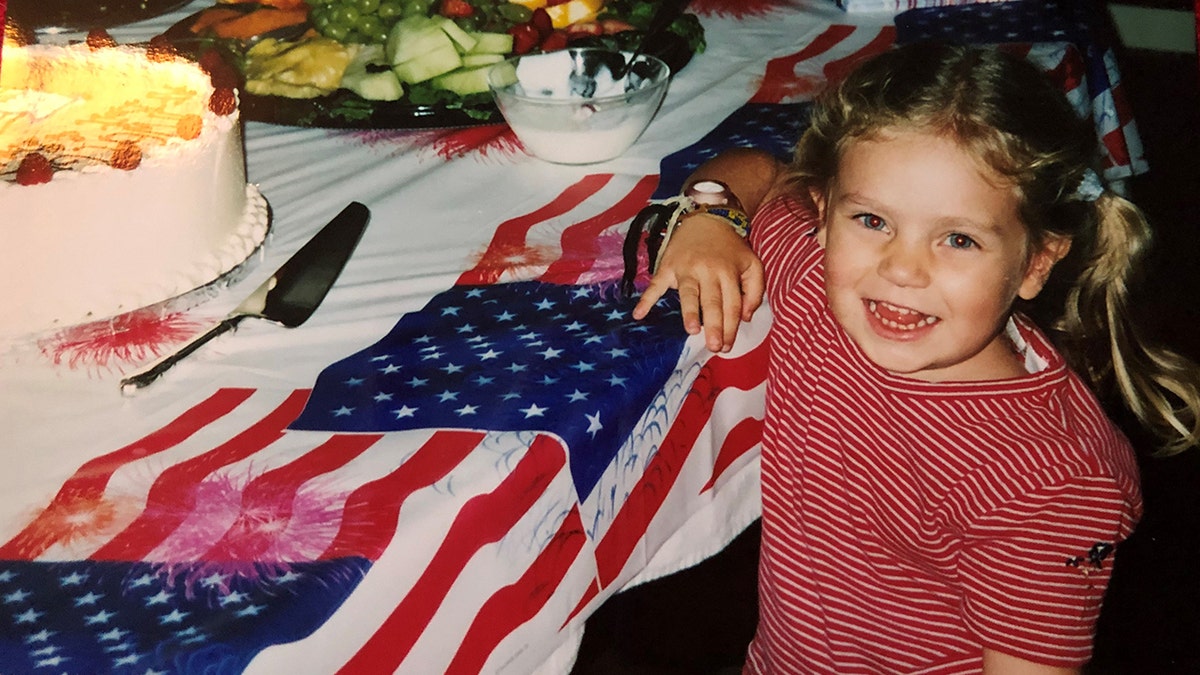 Lt. Col. Dana Born could see the flames and smoke from across the Potomac River. She immediately got on the phone with her husband, who was already on his way to rescue their two children from the Pentagon’s day care center. They were 3 years old and 4 months old, respectively.

“I don’t know if my husband called me or I called him, but we got on the phone,” the retired Air Force Brig. Gen. told Fox News. “The only thing I said was, ‘The Pentagon’s been hit.’”

“He said, ‘I’m on my way,’ which told me he was going to look after figuring out how to get the kids,” she continued. “And then I went into commander mode along with my team to do what we had trained to do.” 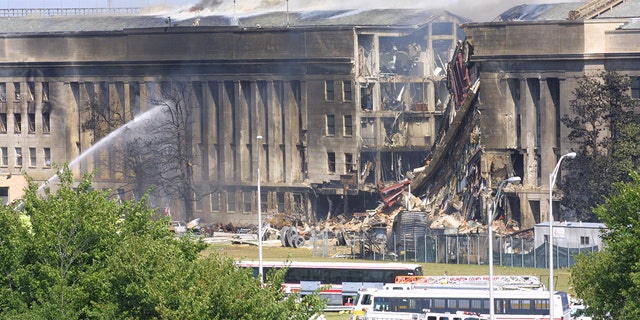 Smoke comes out from the Southwest E-ring of the Pentagon building Sept. 11, 2001 in Arlington, Virginia, after a plane crashed into the building and set off a huge explosion.
(Alex Wong/Getty Images)

Lt. Col. Tim Born made it to the Pentagon and was directed to where the day care center had been relocated after being evacuated. The day care center director would later describe the rescue: service members from each military branch carried cribs with multiple infants in them, walked hand in hand with confused and stunned toddlers and ensured every child was safe in less than an hour.

BIDEN TO VISIT NEW YORK CITY, PENNSYLVANIA, THE PENTAGON ON 9/11

Their mother Dana, who at the time commanded the 11th Mission Support Squadron at what was then-Bolling Air Force Base in Washington, D.C., was conducting a staff meeting across the Potomac River from the Pentagon when the third hijacked plane struck the Pentagon.

“It was a beautiful morning, as beautiful as they come, blue skies, and look at how things happened,” Dana told Fox News in an interview.

Tim Born, who had dropped the girls off that morning, was in his office’s conference room watching the news coverage of the attacks on the twin towers.

“About 30 minutes into the broadcast they reported an explosion at the Pentagon,” he told Fox News.

“I didn’t wait around for the details,” Tim said. “I ran to my office to grab my car key and just as I was rushing out the door the phone rang and it was my wife on the phone.”

“The only thing she said was, ‘You’ve got to get the kids, the Pentagon’s been hit,’” he recounted.

It took him 45 minutes of navigating traffic to reach the Pentagon, but by the time Tim arrived, armed guards told him that the day care had already been evacuated and relocated to a position half a mile north of the building. 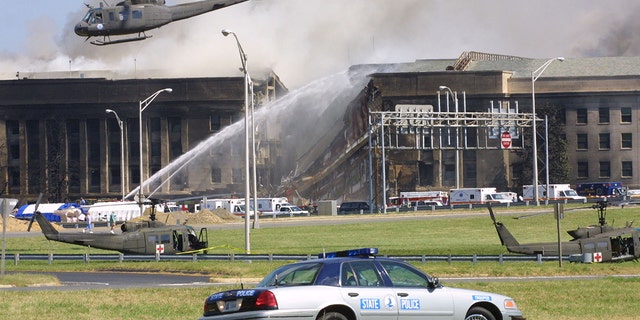 Smoke comes out from the Southwest E-ring of the Pentagon building Sept. 11, 2001 in Arlington, Virginia, after a plane crashed into the building and set off a huge explosion.
(Alex Wong/Getty Images)

The frantic father spent another 15 minutes searching until he was finally granted a moment of relief.

“It’s a scene I’ll never forget as long as I live,” Tim said.

“Behind me was total destruction, chaos and death,” he told Fox News. “And in front of me, on the banks of the Potomac, a small tributary called Boundary Channel, they had reestablished the Pentagon day care and there was a ring of cribs with two or three young infants in each crib.”

Hanna, who graduated from the Air Force Academy last year, told Fox News: “I remember my dad came to pick my sister and I up and we went out and stayed with one of his co-workers.”

“My memories of 9/11 are a bit fragmented just because I was so young” the second lieutenant continued, though she said she vividly remembers the chaos and confusion of that day.

Relief had not yet set in for Dana, however. She didn’t learn her daughters were safe until nine hours after the attack on the Pentagon.

“In that nine hours, probably in the in the depth of me I was concerned, but my role was as commander and I had to stay in that role,” said Born.

Tim Born recalled returning to the day care center three days later to thank the director for getting the kids to safety. He also asked her how she was able to evacuate everyone so far so quickly. 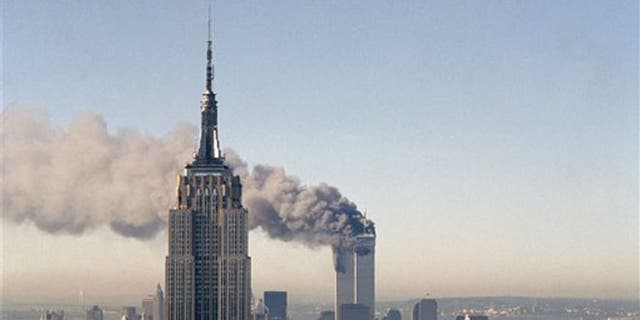 “She indicated virtually as soon as the plane hit there was a loud banging on the door,” he said. The day care director then ran to the glass door and was met with “a sea of uniforms. Coast Guard men, Marines, Airmen, Navy, Soldiers.”

“She opened the door and there was a Marine right dead center,” Tim continued. “He said four words: ‘How can we help?'”

The service members evacuated the day care center and ensured every child’s safety in less than an hour.

“My wife and I have been grateful to this day,” Tim told Fox News.

The couple didn’t know the identities of any of the service members involved in the rescue until about a year ago, when Hanna received an email from one of the officers who had helped evacuate the day care center.

Like countless Americans, the effects of Sept. 11 on the Born family are deep and long-lasting.

Dana, who was considering retiring at the time of the attack, remained in the Air Force until 2013, marking 30 years of service. Tim Born chose to retire to stay home and support his young daughters who suffered psychological trauma from the attack.

“What changed in me as a result of 9/11? I think it’s really a clarity of the fact that freedom isn’t free,” Dana told Fox News. “9/11 is a remembrance of the lives lost, gratitude for people who had put themselves in harm’s way and a reminder to always be vigilant and to recognize that we want to trust but verify that we are protecting our freedoms.”

And 20 years later, Hanna and Heather have both chosen a path of military service as a result of that day.

“I have a lot more memories in the years after just of how my parents talked to us about 9/11 and helped shape our perspective on it and continued to communicate to us the significance of those events and how not to get stuck in the trauma, but to reshape it in a way that has turned into a lot of why my sister and I have both been inspired to serve,” Hanna, 23, told Fox News.

Heather, 20, is in her third year at the Naval Academy. While she may not have memories of that day, she said the effects of 9/11 helped her toward a career in the military.

“I’m absolutely proud to have the opportunity to be here and to lead a life filled with purpose and dedicated to honoring those who have fallen and whose lives were forever changed by that day,” Heather told Fox News.

Teny Sahakian is an Associate Producer/Writer for Fox News and Fox Business. Follow Teny Sahakian on Twitter at @tenysahakian. If you’ve got a tip, you can email Teny at Teny.Sahakian@fox.com