A 17-year-old Iowa high school basketball player has been charged with a felony after being caught on video sucker-punching an opponent during post-game handshakes.

The incident happened Tuesday night at Carlisle High School outside of Des Moines, and the victim, as a result, “sustained a loss of consciousness, injuries to his mouth and immediately received medical care,” the Carlisle Police Department said. 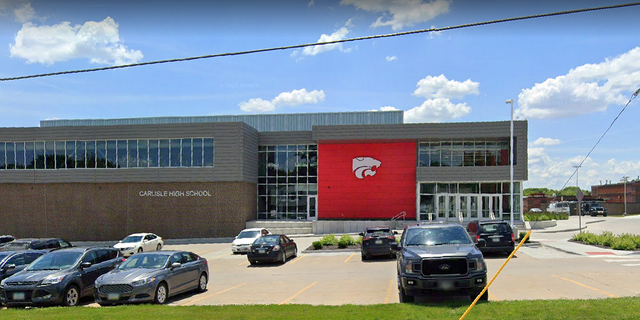 The sucker punch attack was filmed on video during post-game handshakes following a basketball game at Carlisle High School in Iowa on Tuesday night.
(Google Maps)

Police charged the alleged attacker with willful injury – causing serious injury and booked him into a local jail. He has since been released on bond, according to the news station WOI-DT.

Video of the incident shows one player suddenly punching the victim in the gut before winding up and landing a second blow on his face.

As the victim begins to fall backward into the arms of a teammate, the aggressor appears to attempt a third punch before players from both sides intervene.

“It was a very unfortunate and disturbing situation,” Nevada Community School District Superintendent Steve Gray told WOI-DT. “Fortunately, it sounds like our student-athlete is going to be alright.”

It was not immediately clear what sparked the punches.

“Violent conduct has no place in Iowa high school activities,” a spokesperson for the Iowa High School Athletic Association told WOI-DT. “IHSAA administrators are working with both schools to ensure appropriate guidelines are followed for violent behaviors from student-athletes.”

The station reports that the incident took place on the opening night of both teams’ basketball seasons.