A Florida sheriff has shared video of deputies racing to rescue a woman trapped inside a burning car last month, praising their “selfless efforts” to ensure she made it out alive.

Deputies responded just after midnight to a crash on the Suncoast Parkway on the state Route 52 overpass on Dec. 29, the Pasco Sheriff’s Office said. The vehicle was partially over a guardrail and flames were shooting out from underneath its hood.

In graphic officer-worn bodycam footage, deputies rush toward the burning vehicle and use fire extinguishers on the flames. But the fire continued to burn and move closer to the trapped driver.

Deputies used fire extinguishers on the flames but the fire continued to spread closer to the driver.
(Pasco Sheriff’s Office)

Deputies used up all three fire extinguishers they had while trying to extinguish the flames, a spokeswoman for the sheriff’s office told FOX13 Tampa.

With the fire still consuming the car, video shows deputies trying to pull the woman out through the backseat. But they could not move her seat and the woman remained trapped. 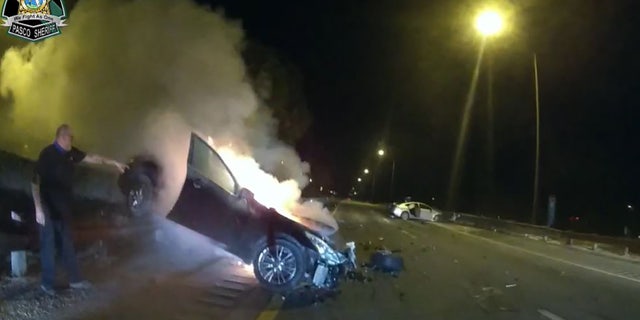 Pasco County deputies responded just after midnight to a crash on the Suncoast Parkway on the state Route 52 overpass on Dec. 29.
(Pasco Sheriff’s Office)

Video shows a quick-thinking deputy break down the rest of the crushed driver’s side door. He and at least two other deputies quickly pull her out to safety over the pushed-in steering wheel and airbags. 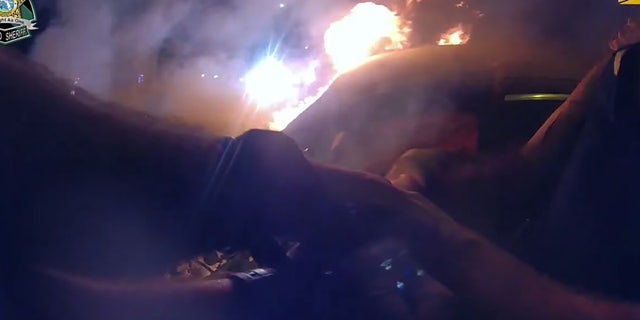 Deputies pulled the trapped woman out of the burning car after breaking down the driver’s side door.
(Pasco Sheriff’s Office)

“We share video of this rescue to show the dangers our deputies face each shift,” the sheriff’s office said. “We’re proud of the deputies’ selfless efforts to ensure the driver made it out of the car alive.”

The 30-year-old woman was believed to be intoxicated while driving on the wrong side of the road and colliding head-on with another vehicle, the station reported, citing a Florida Highway Patrol crash report. The woman was rushed to a hospital, where she was in stable condition.