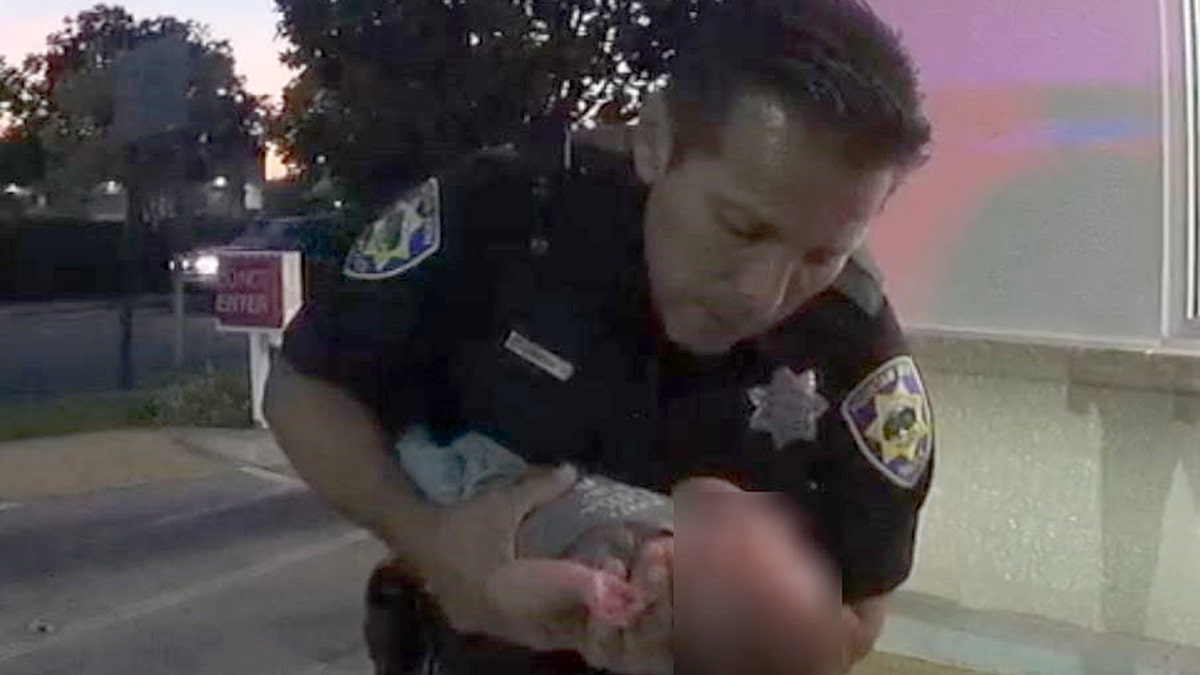 A California police officer was caught on camera Monday evening as he worked to save the life of a choking infant at a Mountain View In N Out Burger.

According to a release from the Mountain View Police Department (MVPD), Officer Garcia was in the parking lot across the street from the fast-food chain – located on the 1100 block of Rengstorff Avenue – when MVPD dispatch received a call at around 7:45 p.m. PT that “a baby boy was choking outside the In N Out.”

NYPD LEADERS AMONG THOSE HONORING 9/11 HEROES, FIRST RESPONDERS BY RUNNING TO RAISE MONEY FOR TUNNEL 2 TOWERS

Garcia, who had been writing a report on a separate incident, ran over to the In N Out where he found the baby and his family outside.

The infant was neither breathing nor moving.

The patrol officer took the baby and began performing CPR.

“For several minutes, Officer Garcia did chest compressions and got the baby to begin breathing again,” MVPD wrote.

The city’s fire personnel arrived on the scene shortly after to conduct follow-up medical care and assisted in transporting the baby to a local hospital for treatment.

The child has since been released and is back home with his family.

“We’re thankful to report that the baby is home and safe,” MVPD said in a Thursday tweet.

“I am so proud of the quick actions that were taken to help this littlest Mountain View resident,” Chief Chris Hsiung said in a statement. “It is a good feeling to know we have someone like Officer Garcia ever ready to help our community in a time of need.”

The department advised that those administering CPR kneel beside the baby or hold it firmly depending on its age, push hard and fast with one or two fingers to deliver 30 quick compressions each around 1.5 inches deep, give two rescue breaths by making a seal over the infant’s mouth and nose before blowing to make the chest clearly rise and continue the steps until there are obvious signs of life, until an AED (automated external defibrillator) is ready to use, an EMS professional takes over, the scene becomes unsafe or the person administering CPR is too exhausted to continue.