Antisemitism on college campuses on the rise, report finds: ‘Each act has gotten bigger and bolder’ 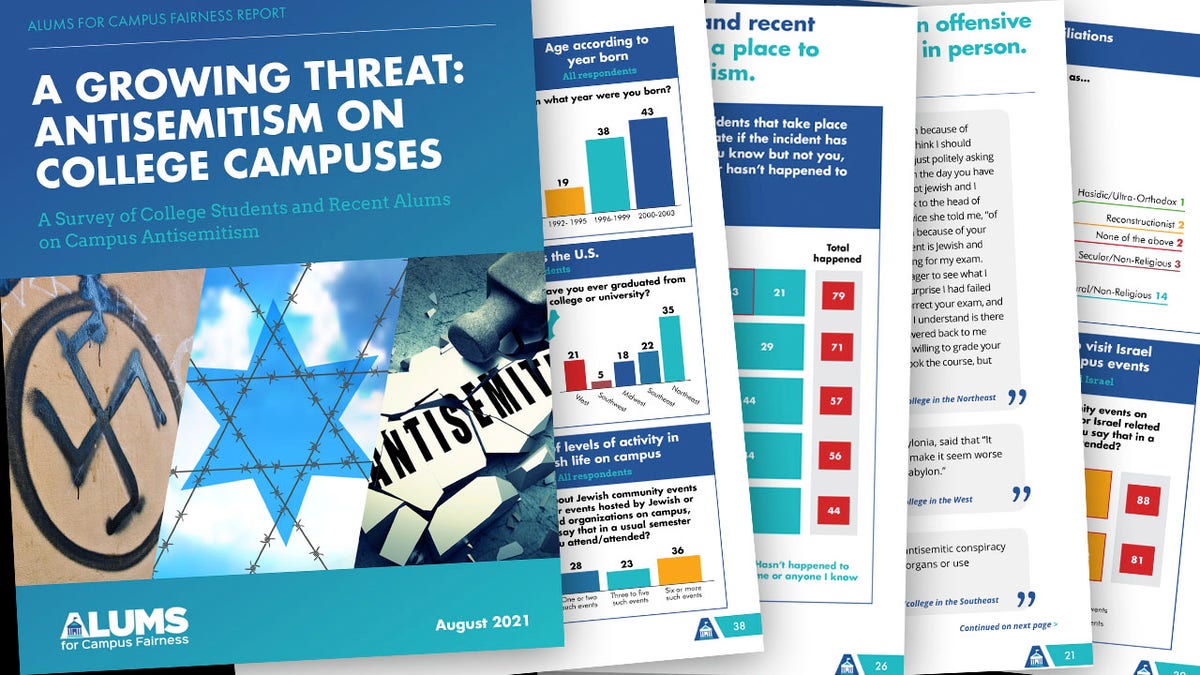 A new report reveals an increase in antisemitic incidents on U.S. college campuses, with hundreds of current and former students noting that antisemitism is a problem.

Alums for Campus Fairness (ACF), an alumni network trying to combat campus antisemitism and anti-Israel bias, conducted the survey between March 25 and June 14 and noted that the report included first-hand accounts from students who said they experienced Holocaust comparisons, Jewish stereotyping and common antisemitic tropes on their college campuses. The students also cited administrative negligence in the report titled “A Growing Threat: Antisemitism on College Campuses.”

ACF released the results of the survey of Jewish college students and recent alums last week and found 95% of those who participated said antisemitism is an issue, with three out of four describing it as a “very serious problem.”

The survey found that nearly half of current students said antisemitism is getting worse on their college campuses.

One anonymous student noted that a professor made “a horribly offensive analogy about the Holocaust.”

“When I told her it was offensive, she gaslit me and said if I was so sensitive, I should find another career,” that student continued, adding that “there has been rising anti-Israel activity on-campus” and that “we have found swastikas and hate-speech from alt-right groups on campus.”

Another student said that “UConn [The University of Connecticut] has experienced seven antisemitic incidents in the year and three during Passover alone.”

“Each act has gotten bigger and bolder, and the students have become frightened,” the student continued.

In April, a 21-year-old UConn student was arrested and charged with a hate crime one month after a swastika was found spray-painted on a chemistry building during the Jewish holiday of Passover, the Hartford Courant reported, noting that the building was located directly across the street from the Hillel, the center for Jewish life and learning on campus.

In a statement sent to Fox News on Sunday a UConn spokeswoman said the same person was arrested twice on charges of painting swastikas found on two campus buildings in two separate incidents, noting that the arrest took place “after extensive investigation that included reviews of video and WiFi access.”

“Hateful acts, including instances of antisemitism, will never be tolerated at UConn,” the spokeswoman said. “Every member of our community – students, faculty, staff, alumni and guests — deserves to feel safe and respected at UConn.”

She added that “anyone who violates that principle goes against the values this university exists to uphold.” 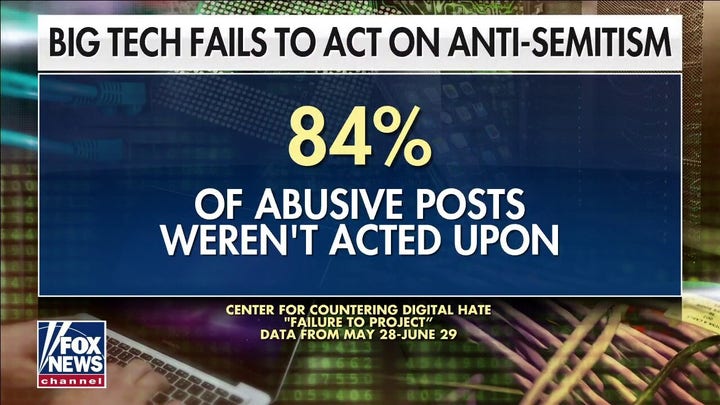 The report also found that 79% of those surveyed had experienced or heard firsthand about another student making offensive or threatening antisemitic comments.

In addition, the survey revealed that more than half have received or heard firsthand offensive or threatening antisemitic comments from a faculty member or university employees.

In May, a required Zoom lecture at a public university in New York City reportedly devolved into a pro-Palestinian protest, as many students and at least one professor “hijacked” the planned curriculum and read out what has been described as antisemitic tropes about the conflict in Israel and the Gaza Strip.

A group of Jewish students at the Silberman School of Social Work at Hunter College, CUNY told Fox News that they feared returning to campus for in-person instruction in the fall.

During the organized intervention that some said resembled a “Zoom bombing,” many of the nearly 200 participants in the class changed their backgrounds to Palestinian flags and their names to “Free Palestine: Decolonize.” Protesters took turns reading out a manifesto and the chat section was also flooded with comments — one of which said that Israel uses the Holocaust as “a tool.”

One student, who wanted to remain anonymous, told Fox News, “They were totally and completely demonizing Israel, and I was so horrified, I was sick to my stomach.”

“The horrifying thing is that there were professors that were expressing their opinions on it,” she added. “They’re supposed to be the mediators in the discussion, not the ones who are fueling the fire.”

In a statement sent to Fox News, the Silberman School of Social Work at Hunter College said it “takes very seriously any allegations of antisemitism.”

“While we respect the principle of an open and free exchange of ideas, we will not tolerate hate speech in any form,” the school added. “As the oldest and largest public school of social work in NYC, we will continue to work earnestly with our students, faculty, staff and alumni to ensure our school remains a safe and inclusive environment for all.”

Also in May, nearby Rutgers University in New Jersey issued an apology to pro-Palestinian students after school officials first denounced antisemitism after a fraternity house was egged during a Holocaust remembrance event, then replaced the statement on the university’s website.

In 2019, ACF released a report that referred to Columbia University and its sister school, Barnard College, in New York City as “a hotbed for hate,” documenting “systemic antisemitism and an ingrained delegitimization of Israel” at the schools.

The report cited more than 100 incidents “that have contributed to a hostile climate” at the colleges since the 2016-17 academic year and included “antisemitic expressions, incidents targeting Jewish students and staff, and BDS (Boycott, Divestment, and Sanctions) activity.” The report recorded how the work of Columbia faculty members has allegedly targeted Jewish and Zionist students.

“These campuses are arguably the most prominent settings for university-based antisemitism in the United States,” the 2019 report said.

One incident mentioned in the report is from November 2018 when a Columbia University Jewish professor’s office was vandalized with swastikas and an antisemitic slur was found spray-painted in red in the entryway to the Holocaust scholar’s office.

At the time a Columbia University spokesperson said in a statement sent to Fox News, “Columbia is deeply proud of our thriving Jewish student, faculty and staff communities on campus, the contributions and accomplishments of our Institute for Israel and Jewish Studies Center, and the many other academic initiatives, public programs, and social events that are part of the fabric of Jewish life here.” 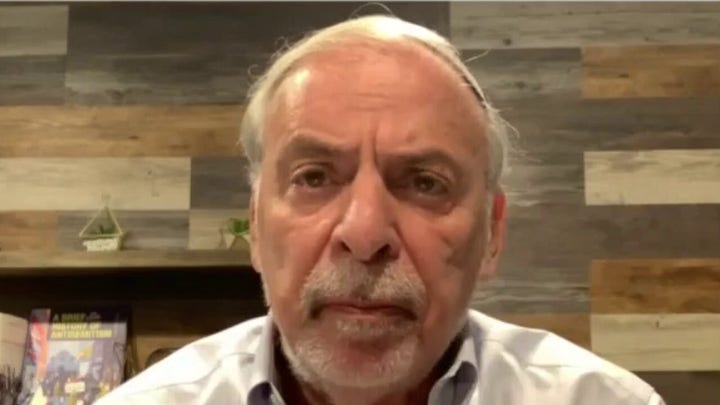 A statement sent to Fox News from a Barnard College spokeswoman said: “Barnard College values its vibrant Jewish community and is committed to providing all of our students, faculty, and staff with the support and resources they need to express their religious beliefs in a welcoming environment. Antisemitism has no place at Barnard and is a direct violation of our non-discrimination policy. We will continue to uphold the rights of everyone on our campus and provide students with the skills and abilities to think critically, deeply, and with moral courage about the complex world around them.”

One recommendation mentioned in the report includes immediate responses to antisemitic incidents by college administrators. Another calls for colleges to adopt the International Holocaust Remembrance Alliance’s working definition of antisemitism, which can include criticism of Israel.