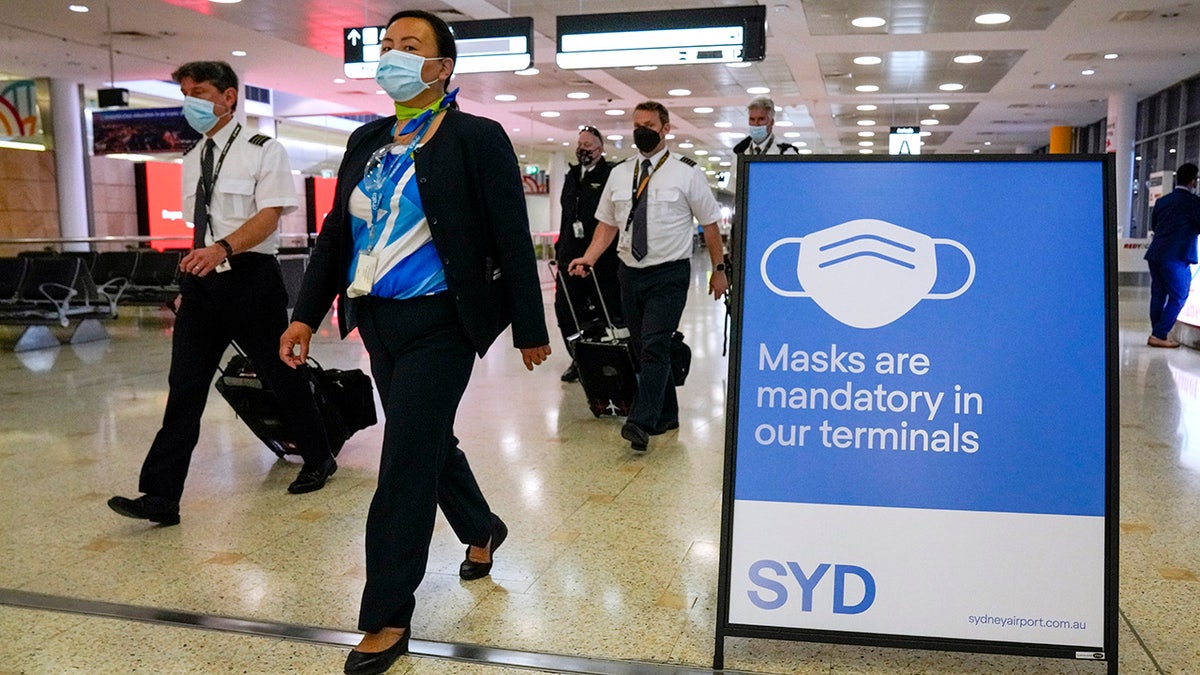 Portuguese health authorities said Monday they have identified 13 cases of omicron, the new coronavirus variant believed to be more contagious, among team members of a professional soccer club.

The Ricardo Jorge National Health Institute said Monday that one of those who tested positive at the Lisbon-based Belenenses soccer club had recently traveled to South Africa, where the omicron variant was first identified.

The others, however, had not traveled to South Africa, indicating that this may be one of the very first cases of local transmission of the virus outside of southern Africa. 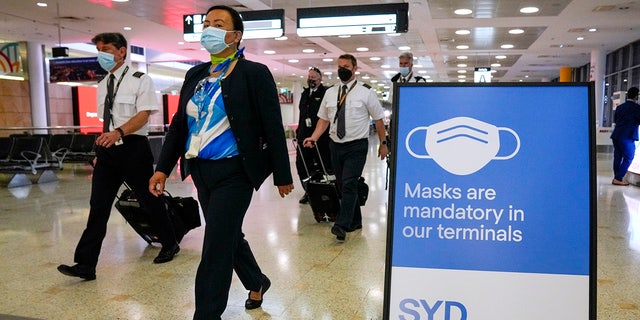 Those who have been in contact with the positive cases have been ordered to isolate, regardless of their vaccination status or their exposure to possible contagion, and will be regularly tested for COVID-19, the institute said.

As cases of a new coronavirus variant are confirmed around the world, Japan announced Monday that it will suspend entry of all foreign visitors, joining an increasing number of countries that are tightening their borders as fear spreads of yet another extension of pandemic suffering.

Japan, which has yet to detect any cases of the recently identified omicron variant, reimposed border controls that it eased earlier this month for short-term business visitors, foreign students, and workers.

Despite the global worry, however, scientists cautioned that it’s still unclear whether omicron is more dangerous than other versions of a virus that has killed more than 5 million people. Some countries are continuing with previous plans to loosen restrictions, with signs of reopening in Malaysia, Singapore, and New Zealand.

“We are taking the step as an emergency precaution to prevent a worst-case scenario in Japan,” Prime Minister Fumio Kishida said of the measure that begins Tuesday. Japan has kept its border closed to foreign tourists from all nations.

Kishida urged people to continue wearing masks and pursuing other basic anti-virus measures until further details of the new omicron variant are known.

Kishida, whose predecessor lost his job in part because of disappointment over his handling of the virus, was not alone in choosing an aggressive approach until details of what omicron can do emerge.

Israel decided to bar entry to foreigners, and Morocco said it would suspend all incoming flights for two weeks starting Monday — among the most drastic of the growing raft of travel curbs being imposed by nations around the world as they scrambled to slow the variant’s spread. Scientists in several places — from Hong Kong to Europe to North America — confirmed its presence.

Others to report new cases over the weekend were the Netherlands, which has 13 confirmed cases, while Canada has found two.

In Malaysia, however, officials went ahead with the partial reopening of a bridge connecting it to the island city-state of Singapore. And New Zealand announced it will continue plans to reopen internally after months of shutdown, while also restricting travel from African nations.

The World Health Organization, noting that the variant has already been detected in many countries and that closing borders often has a limited effect, called for frontiers to remain open. 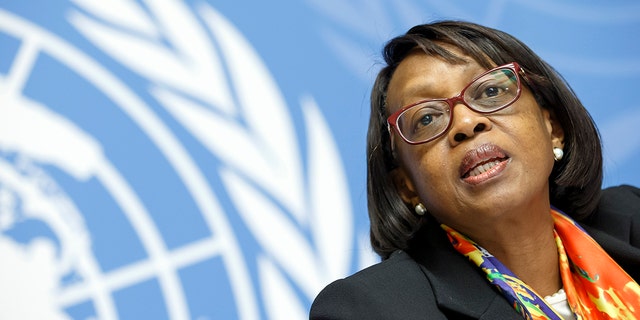 Matshidiso Moeti, World Health Organization (WHO) Regional Director for Africa, speaks at a press conference at the European headquarters of the United Nations in Geneva, Switzerland, on Feb. 1, 2019. (Salvatore Di Nolfi/Keystone via AP, File)

The variant was identified days ago by researchers in South Africa, and much about it is still unclear, including whether it is more contagious, more likely to cause serious illness, or more able to evade the protection of vaccines.

Health officials in Australia’s Northern Territory announced that the state confirmed its first case of omicron on Monday, a South African man who flew into Darwin last Thursday. Australian Health Minister Greg Hunt said the prime minister is convening the National Security Committee to review actions that could be taken over omicron.

In New South Wales, Premier Dominic Perrottet said Monday there could be a third omicron case in his state. Health authorities there announced Sunday that two travelers returning from South Africa had tested positive. They were asymptomatic and fully vaccinated. Arrivals from nine African countries are now required to quarantine in a hotel upon arrival.

And omicron hasn’t changed New Zealand’s plans to ease restrictions in Auckland and move the nation into a new, more open phase of its pandemic response, Ardern said Monday. Bars, restaurants, and gyms in Auckland can reopen from late Thursday, ending a coronavirus lockdown that began in August.

“We’ve come through the past two years of COVID in better shape than nearly anywhere in the world,” Ardern said, pointing to low death rates, a growing economy, and high vaccination rates.

Malaysians working in Singapore held joyful reunions with loved ones after returning to their homeland following the partial reopening of a land border that was shuttered for nearly two years because of the pandemic.

Malaysia’s health minister tweeted that a COVID-19 case was detected during a screening, but didn’t elaborate. The causeway was one of the world’s busiest land borders before the pandemic struck. Air travel also reopened with fewer restrictions, allowing anyone who is fully vaccinated to travel quarantine-free between the two countries.

Taiwan, which already has strict border entry controls, said it’s not planning to further tighten its COVID-19 border policies to protect against the omicron variant.

Taiwan requires a two-week quarantine on arrival. It also has restricted the issuing of visas and currently does not allow in foreigners, except those with residency permits and those who have special circumstances.

Taiwan is bracing for a surge of visitors ahead of the lunar new year and has allowed those returning to complete the two-week quarantine partly at home. However, anyone arriving is still required to stick to the entire 14-day quarantine schedule and face fines if they break quarantine.

North Korea, which claims no virus cases and which has taken among the world’s harshest anti-virus measures, says it’s making all-out efforts to prevent omicron from entering the country. Many question its claim of being coronavirus-free. Since the start of the pandemic, North Korea has sealed off its international borders and jetted out diplomats. 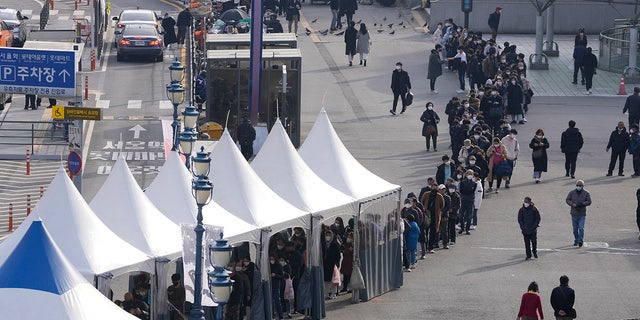 Dr. Francis Collins, director of the National Institutes of Health in the United States, meanwhile, said no data as yet suggest the new variant causes more serious illness than previous COVID-19 variants.

“I do think it’s more contagious when you look at how rapidly it spread through multiple districts in South Africa. It has the earmarks therefore of being particularly likely to spread from one person to another. … What we don’t know is whether it can compete with delta,” Collins said on CNN’s “State of the Union.”

Collins echoed several experts in saying the news should make everyone redouble their efforts to use the tools the world already has, including vaccinations, booster shots, and measures such as mask-wearing.

The U.S. is banning travel from South Africa and seven other southern African countries starting Monday. “It’s going to give us a period of time to enhance our preparedness,” the United States’ top infectious diseases expert, Dr. Anthony Fauci, said of the ban on ABC’s “This Week.”

Fauci says it will take approximately two more weeks to have more definitive information on the transmissibility, severity, and other characteristics of omicron, according to a statement from the White House.

South Africa’s government responded angrily to the travel bans, which it said are “akin to punishing South Africa for its advanced genomic sequencing and the ability to detect new variants quicker.”

David Hui, a respiratory medicine expert and government adviser on the pandemic in Hong Kong, said the two people who tested positive there for the omicron variant had received the Pfizer vaccine and exhibited very mild symptoms, such as a sore throat.

“Vaccines should work but there would be some reduction in effectiveness,” he said.

Associated Press journalists from around the world contributed to this report.