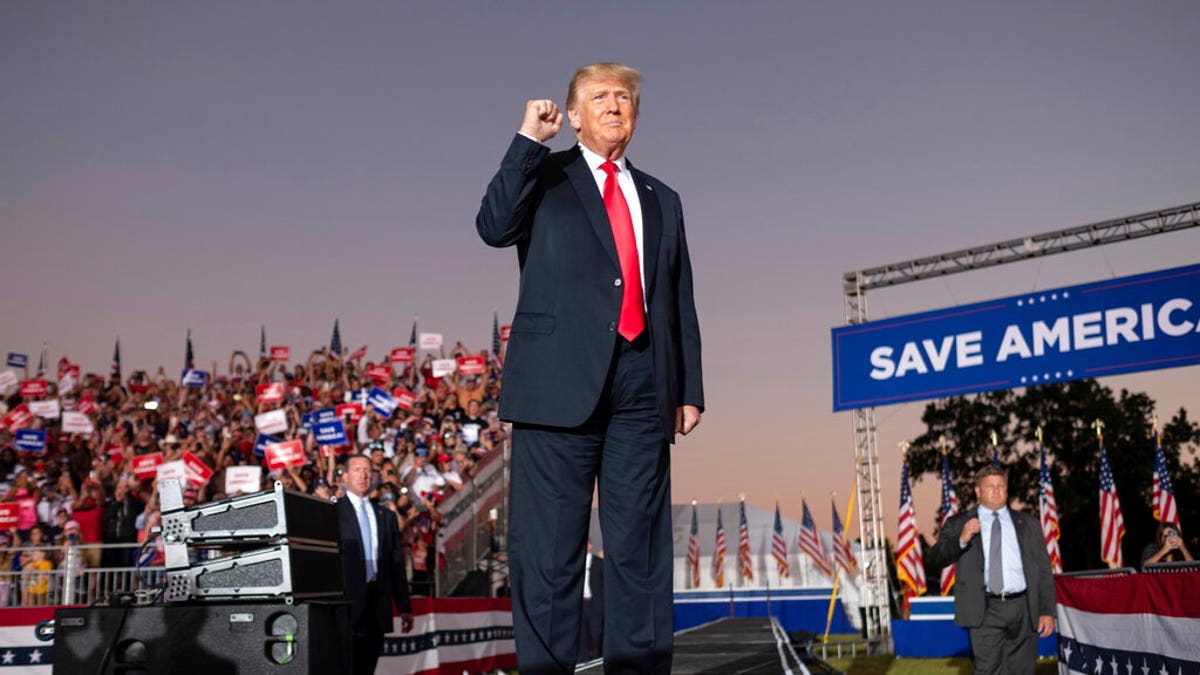 DES MOINES, IOWA – Former President Trump took aim at the massive spending bill that President Biden and congressional Democrats are trying to pass into law, charging it’s a “monstrosity” and “so dangerous for our country.”

Trump’s attacks on the multitrillion-dollar human infrastructure, social spending and climate change package came as he held a rally in Iowa on Saturday. It was the former president’s first stop in the competitive Central Plains state since last year’s election.

Iowa is also the state whose caucuses have kicked off the presidential nomination calendar for the past half-century, and Trump’s stop sparked more speculation he’ll make another White House run in 2024.

TRUMP RETURNS TO IOWA TO BOOST 2022 REPUBLICANS, BUT LAYS DOWN 2024 MARKER

Iowa was once a key battleground state, but Trump comfortably won it during his 2016 and 2020 campaigns.

He arrived in the Hawkeye State days after scoring his best favorable ratings ever in the Des Moines Register poll, which is considered the gold standard in this neck of the woods.

Fifty-three percent of Iowans had a favorable view of the former president and 45% hold an unfavorable view, according to the Des Moines Register/Mediacom survey released Monday. And among Republicans only, he was at a sky high 91% favorability.

Trump touted the poll, saying “we’re at the highest we’ve ever been.”

He also spotlighted his victory in Iowa last November, adding “you proved why Iowa should vote first in the nation.”

The former president took a few jabs at a small group of GOP senators, led by Senate Republican Leader Mitch McConnell, for earlier this week allowing the majority Democrats to temporarily lift the debt ceiling, which prevented the nation from defaulting.

“To think that we had 11 Republicans go along with an extension, headed up by Mitch McConnell,” Trump said, eliciting boos from the large crowd of supporters at the rally site at the Iowa State Fairgrounds.

Trump also repeatedly pilloried his successor in the White House for his handling of the rocky U.S. withdrawal and evacuation from Afghanistan. He also criticized Biden over the influx of migrants trying to cross the nation’s southern border with Mexico, and over the surge in COVID cases as the highly infectious delta variant spread across the country.

The former president charged that Biden and congressional Democrats were taking the nation to “the brink of ruin.”

The Democratic National Committee slammed Trump’s stop in Iowa.  DNC spokesperson Ammar Moussa said Trump’s firm grip over the GOP “is the anvil around their necks going into 2022.”