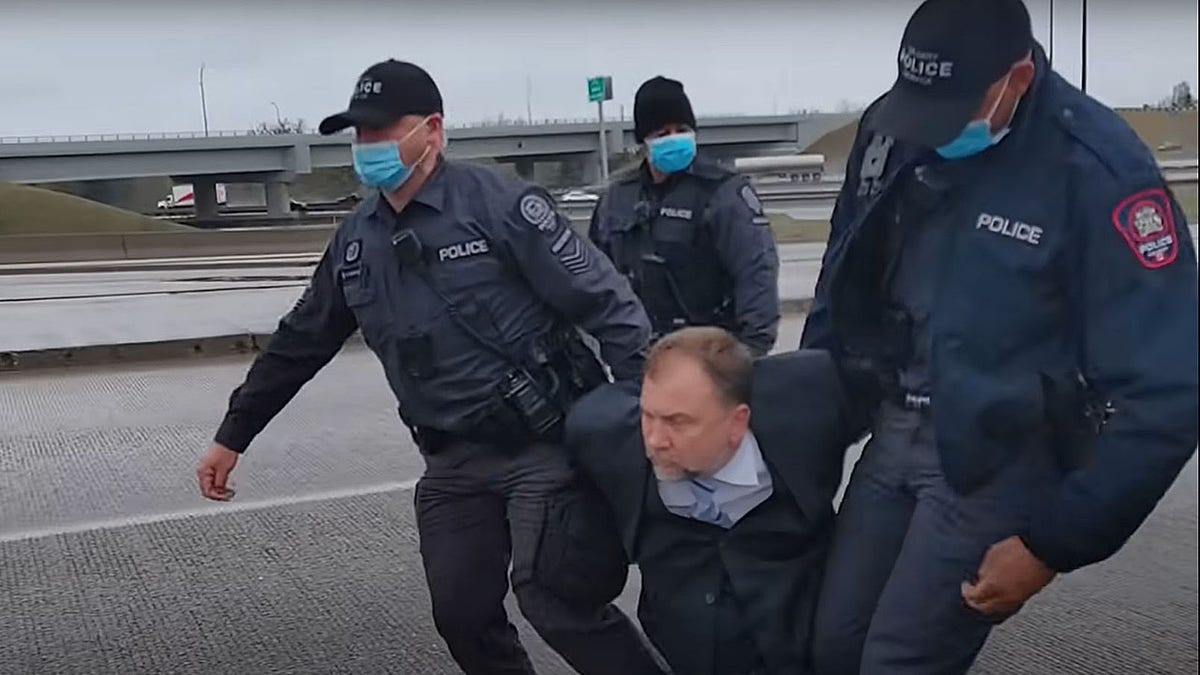 EXCLUSIVE: The Polish- pastor who has been repeatedly arrested for holding church services in Calgary, Alberta, said Canadian border police confiscated his belongings and apparently broke into his personal computer.

When Pastor Artur Pawlowski landed back in his home city of Calgary on Monday following a four-month tour of the United States, customs officials were waiting to cuff him on the tarmac for two criminal charges, he told Fox News in an interview.

“They have fallen to a new low,” Pawlowski said of the Canadian authorities. “Our lawyers contacted them and asked them if there are any pending warrants for me when I was in the states. They said that there are no pending warrants, there is nothing outstanding.”

Pawlowski had been traveling throughout the United States over the summer to spread his warning that Western governments increasingly resemble the communist regime in he fled as a young man.

His tour followed the international attention he received in April when officials went to his church in Canada during Holy Week to inspect it for COVID-19 compliance. Because they entered the sanctuary armed and uninvited during a worship service, Pawlowski refused to speak with them.

Instead, he accused them of being “Nazis” and shouted them down until they agreed to leave. Video of the encounter went viral.

Three weeks later, officials returned with a court order authorizing them to access Pawlowski’s church and arrest him if he failed to comply. Again he demanded they leave the church property and contact his lawyer.

On May 8, a motorcade of Calgary police vehicles pulled over Pawlowski and his brother to them in the middle of a highway on their way home from church.

This time, Pawlowski speculated that they misled his lawyers before activating criminal charges against him Monday while he was in the air.

The first criminal charge, Pawlowski explained, was levied against him for failing to wear a mask in public, despite a medical exemption from his doctor. The second was for organizing an illegal church gathering. Both were related to offenses in March and June.

In an interaction he characterized as an ambush, Pawlowski recounted how three officers demanded that he and his pilot step out of the plane. He said he heard one of the officers tell the pilot to surrender his phone, though the pilot refused and managed to record the incident.

Particularly troubling to Pawlowski was that he was not allowed to greet his family, who were waiting to see him for the first time in months. His wife, he said, was notified of his arrest by reporters.

“That was the most brutal thing,” he said. “That was Nazi-style, communist-style. Trying to break a man and his family and children by not allowing me to just even say hi after being away for so long.”

‘I’m not a terrorist’

Pawlowski said authorities confiscated his luggage after they arrested him. Even after his lawyer secured his release during the early morning hours on Tuesday, he said police first denied they knew where his possessions were, though a reporter told him he saw his belongings being packed into a police cruiser.

When he ultimately recovered them at the police station, he said his things had been marked with labels suggesting that authorities had rummaged through them. There were also indications that his personal laptop had been accessed. Normally locked by a passcode, he said it was open when he got it back.

A spokesperson for the Canada Border Services Agency (CBSA) said the agency is bound by Canada’s Privacy Act not to comment on specific individuals or situations but directed Fox News to a website explaining the policies governing the CBSA’s ability to examine electronic devices.

CBSA’s website says agents are authorized to inspect electronic devices, and travelers are obligated to comply to the point of surrendering passwords. Instances of electronic devices being examined are extremely rare, however, and the CBSA’s own statistics claim it has happened to only .014% of those who passed through Canadian ports of entry from Nov. 20, 2017, to June 30, 2021.

“I don’t know what they were looking for,” Pawlowski said. “I’m a pastor. I’m not a spy, and I’m not a terrorist. Everything that I do is public.”

‘The government wants to become God’

Sarah Miller, one of Pawlowski’s attorneys, said his treatment has been “unusual.”

“There was no need to do that at the airport,” she said, adding that police could instead “call him in advance, tell him that they were coming over to lay criminal charges, meet him at his house, give him opportunity to access legal counsel and sign paperwork without having any detention.

“I think that would be the ordinary way to do it,” she added. “But if you’ve been following Artur Pawlowski’s story, there’s nothing ordinary about the way he is treated by officials.”

Since the pandemic, other churches in Canada and Alberta have faced imprisoned pastors, locked facilities, steep fines and continued interference from government officials.

Pawlowski believes churches and clergy are being targeted because they have historically opposed tyranny.

“Jesus Christ is very clear,” the pastor said. “He says, ‘Who comes to me is free indeed.’ We preach freedom. We preach hope. When you don’t have hope in society, then the people are turning for that hope to the government. I think the government wants to become God, to be worshiped. And anyone else or anything else that competes with that has to be destroyed.”

‘They will come for you’

Pawlowski faces a court date on Oct. 13 regarding separate civil charges against him related to his church gatherings. His civil and criminal charges carry a maximum sentence of six years imprisonment, though his lawyer said such an outcome is “highly unlikely.”

During his last hearing, prosecutors for Alberta Health Services (AHS) were seeking 21 days in jail and a fine of $2,000, plus $15,000 in legal costs.

Pawlowski is unsure of how the ruling will play out, but even if he has to return to prison, he remains hopeful.

“I am optimistic that this story is going to end well for me because of the pressure right now that the government has,” he said, noting how his case has drawn the eyes of many Americans.

Eric Trump released a statement Tuesday calling Pawlowski’s most recent arrest “an embarrassment to Canada.” In June, Sen. Josh Hawley, R-Mo., called on the U.S. Commission on International Religious Freedom () to consider adding Canada to its watch list because of how it is treating pastors.

“I really think that people will rise up and will come to my defense and, at the same time, to their own defense,” Pawlowski said. “Because listen very carefully: They came for me, they will come for you. It’s just a matter of not if, but when.”