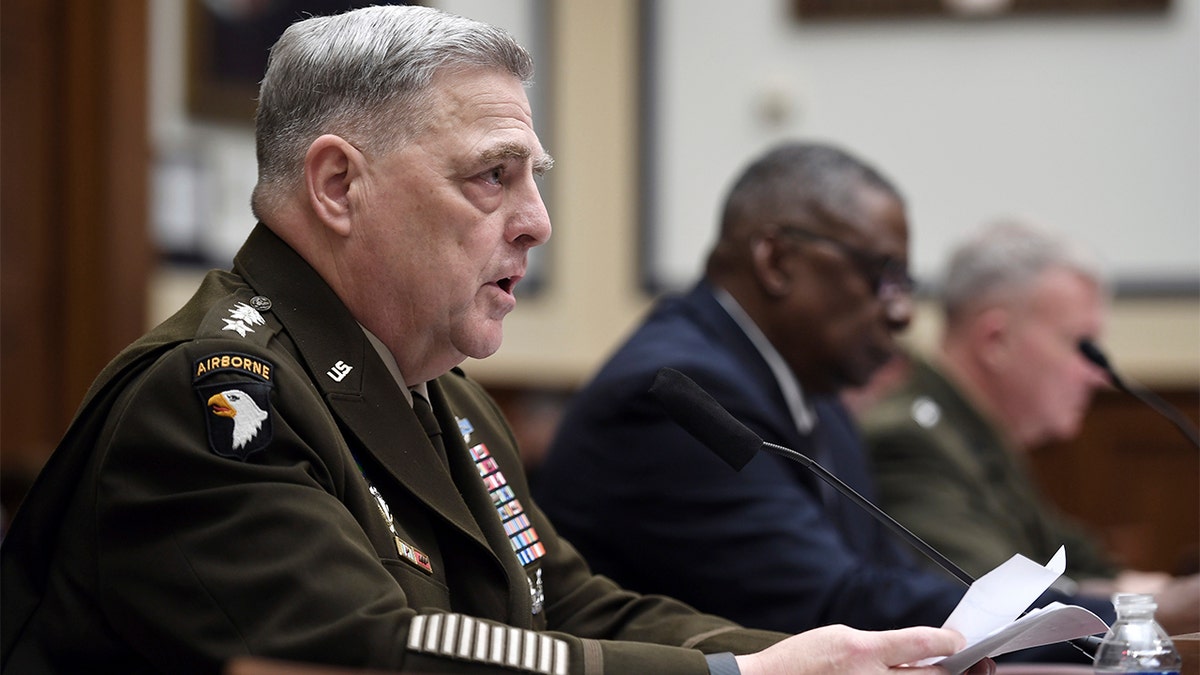 Top Pentagon officials blamed the State Department for not beginning evacuations of civilians from Afghanistan sooner, calling the efforts “chaotic,” while defending the “skill and leadership” of U.S. troops during a hearing before the House Armed Services Committee Wednesday focused on the military withdrawal.

MILLEY CALLS WAR IN AFGHANISTAN A ‘STRATEGIC FAILURE’ FOR US, WARNS TALIBAN ‘REMAIN A TERRORIST ORGANIZATION

Pressed on why evacuations did not begin sooner, Defense Secretary Lloyd Austin said it was a “State Department call.”

“We provide an input, as I said in my opening statement, to the State Department,” Austin said, explaining, though, that officials were “being cautioned” by the Ghani administration that “if they withdrew American citizens and SIV applicants at a pace that was too fast, it would cause a collapse of the government that we were trying to prevent.”

“I think that went into the calculus,” Austin said.

He added, though, that military officials “provided our input” to the State Department.

“We certainly would have liked to see it go faster or sooner,” Austin said. “But, again, they had a number of things to think through as well.”

Later, Chairman of the Joint Chiefs of Staff Mark Milley described the evacuation efforts in the days leading up to the Aug. 31 troop withdrawal deadline as “chaotic,” when asked about the best way to extract U.S. military from Afghanistan.

“I just want to be clear – we’re talking about two different missions,” Milley said. “The retrograde of troops … that is complete by mid-July, and that was done, actually, without any significant incident. And that’s the handover of 11 bases, the bringing out of a lot of equipment … that was done under the command of Gen. Miller.”

“Noncombatant evacuation operation is different,” Milley said, referring to the Biden administration’s efforts to airlift Americans and Afghan allies from Kabul prior to the troop withdrawal deadline. “Noncombat operation – that was done under conditions of great volatility, great violence, great threat.”

Milley said the U.S. military “inserted 6,000 troops on relatively short notice because there were some contingency plans to do that.”

“That’s a different operation,” Milley said. “And I think, that, in the first two days as we saw, were not only chaotic, but violent and high-risk.”

Milley said, though, that “because of the skill and leadership of our troops, they were able to get control of a situation in an airfield, in a country that was falling apart and then execute the operation.”

“So, I think it would have been difficult under any circumstances, and I think our soldiers performed extraordinarily well actually in 48 hours, getting control of an airfield in another country, eight and a half time zones away,” Milley said.

Milley and Austin’s testimony comes nearly a month after the Biden administration on Aug. 31 withdrew all U.S. military assets from the region after having a presence there for 20 years following the attacks on Sept. 11, 2001.

Administration officials have admitted to leaving more than 100 American citizens behind. Officials, though, said their mission in Afghanistan had shifted from a military mission to a diplomatic one, with some saying they were working with the Taliban to ensure safe passage for those Americans and U.S. visa holders, as well as some Afghan allies, to evacuate the country.

Milley, during the hearing Wednesday, called the war in Afghanistan a “strategic failure” for the United States, and warned that the Taliban “remain a terrorist organization” and maintain ties with al Qaeda.

He added, again, that the Taliban “have not broken with al Qaeda.”