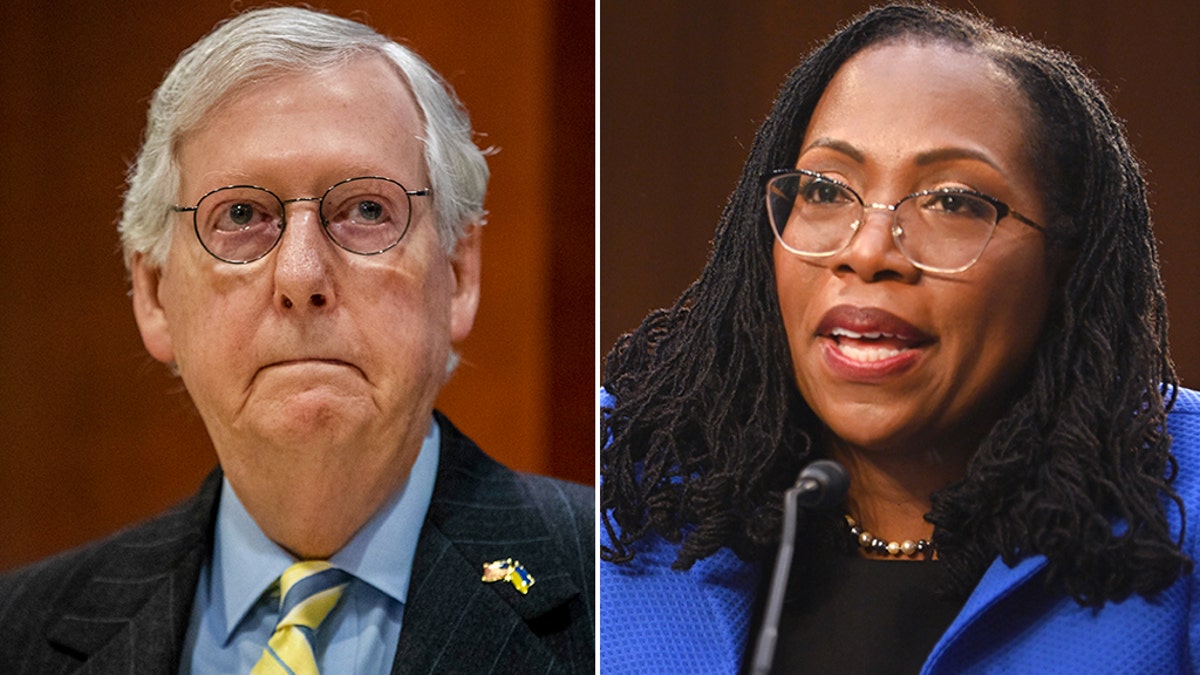 EXCLUSIVE: Senate Minority Leader Mitch McConnell is raising concerns about President Biden’s formal commission of Judge Ketanji Brown Jackson to the Supreme Court before Justice Stephen Breyer formally vacated his seat on the bench, warning that the Biden administration is “continuing to erode norms and our institutions.”

The president formally signed the commission papers appointing Jackson to the Supreme Court earlier this month – though Justice Stephen Breyer still remains on the bench.

Breyer earlier this year announced his intent to retire from the Supreme Court at the end of the 2022 term, which is expected by the end of June.

Jackson, while confirmed by the Senate, and formally appointed by the president to the court, cannot perform duties as a justice until she takes the oath. 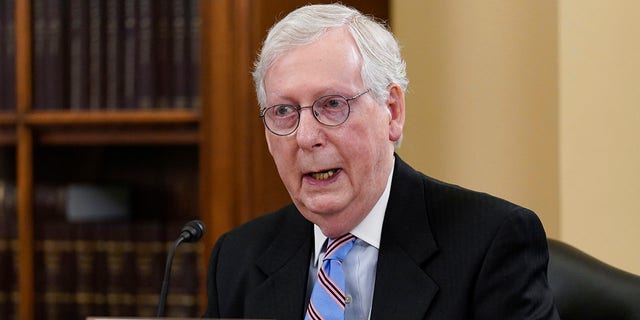 Typically, a new justice is sworn in almost immediately after the president signs the commission.

McConnell was referring to a memo released earlier this month from the Justice Department’s Office of Legal Counsel that states: “If the Senate votes to confirm Judge Ketanji Brown Jackson as an associate justice of the Supreme Court, the president may complete her appointments to the Supreme Court by signing her commission before Justice Breyer’s resignation takes effect.”

“Whether this is just incompetence or some hair-brained scheme, the same president who set up a court-packing commission is continuing to erode norms and our institutions,” McConnell said.

McConnell added that “the president, the attorney general and the chief justice should publicly clarify that the court has eight associate justices and one chief justice, notwithstanding the administration’s claims.”

“The Biden administration’s continued attacks on norms and institutions will have a cost,” McConnell said.

Republican aides argued that a reason for Biden to have formally appointed Jackson could have been to “intentionally confuse” the public on the number of justices on the Supreme Court – hinting at left-wing aspirations to pack the Supreme Court.

GOP aides also told Fox News that, technically, there are now 10 justices on the Supreme Court, with the commission of Jackson.

One GOP aide warned that appointing Jackson prior to Breyer’s formal retirement could create “a new class of justice-in-waiting” before the actual vacancy exists. 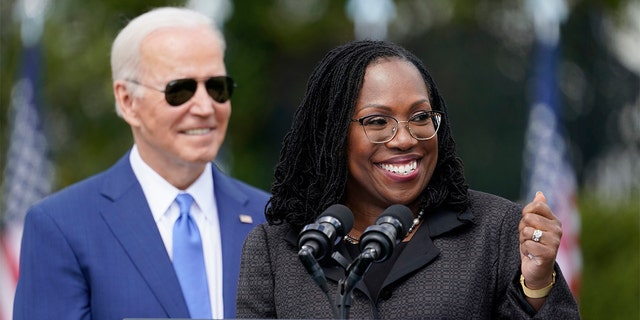 The White House responded by saying that Jackson will not formally become a justice of the Supreme Court until she takes the oath of office following Breyer’s formal retirement.

“Following her bipartisan confirmation, Judge Jackson remains on the U.S. Court of Appeals for the D.C. Circuit and will become an associate justice on the Supreme Court when Justice Breyer steps down at the end of this term and she takes the oaths of office,” White House deputy press secretary Andrew Bates told Fox News. “Unless Sen. McConnell knows something we do not, none of the other eight justices have announced that they plan to retire.”

Bates added: “The president has not and will not name additional Supreme Court nominees unless that changes.”

The White House further pointed to the OLC opinion, citing a memo written by William H. Rehnquist, who served in the 1970s as an assistant attorney general in the OLC and would ultimately become a GOP-appointed chief justice of the Supreme Court.

The OLC makes clear, though, that Jackson “will not” “assume the office of associate justice until Justice Breyer’s resignation is effective.”

“Once his resignation is effective, she would then take the oaths as prescribed by the Constitution and statute,” the OLC opinion reads. 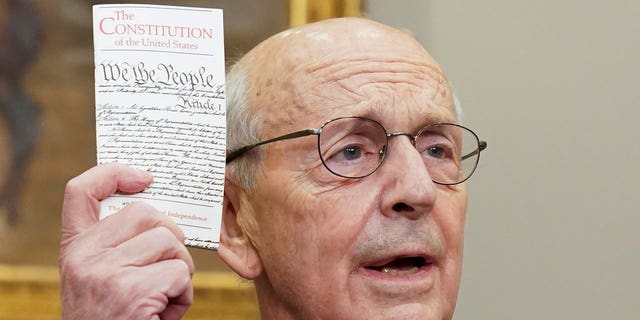 Justice Stephen Breyer holds up a copy of the Constitution as he announces he will retire at the end of the court’s current term on Jan, 27, 2022.
(Reuters/Kevin Lamarque)

The OLC also points to “historical practice” which it says “supports the president’s authority to make prospective appointments of judicial officers.

“The president’s signing of Judge Jackson’s commission would complete her appointment, bringing to an end the president’s and the Senate’s role in the process,” the OLC opinion reads. “The completion of the appointment, however, does not mean that Judge Jackson assumes the office of associate justice. Rather, her entry on the duties of the office remains contingent on Justice Breyer’s resignation becoming effective. Justice Breyer, as a judicial officer with life tenure, cannot be displaced from his office by the president’s appointment of a successor.”

As for concerns of court-packing, the White House last year created a bipartisan commission of 36 members that held public meetings to evaluate court reforms. The panel had 180 days from its first meeting to complete its report on the pros and cons of potential court reforms. 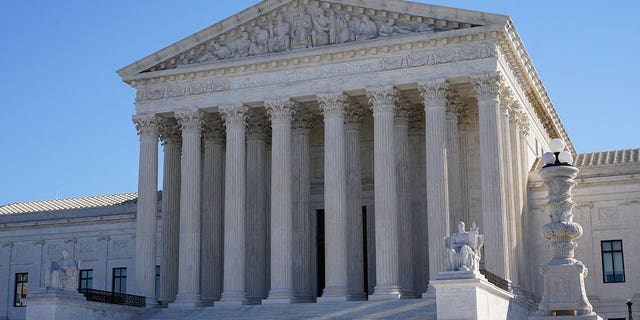 The other members were scholars, lawyers, retired members of the judiciary and advocates, including Caroline Fredrickson, the past president of the American Constitution Society, a progressive legal organization; Sherrilyn Ifill, president of the NAACP Legal Defense and Educational Fund; and Adam White, a resident scholar at the American Enterprise Institute and member of the conservative Federalist Society.

“The first pro-court-packing administration in 85 years appears to be claiming that before any vacancy exists, they can nominate, confirm, and irrevocably appoint a ‘Justice-in-waiting’ that neither any future Senate nor any future President could claw back,” charged a Republican aide familiar with the situation. “If they actually mean it, this is a radical claim that points toward wildly uncharted territory for the confirmation process.”

Biden has expressed opposition to expanding the Supreme Court.

In December, the commission sent a report to the president, rejecting the idea of court packing.

“No serious person, in either major political party, suggests court packing as a means of overturning disliked Supreme Court decisions, whether the decision in question is Roe v. Wade or Citizens United,” the report stated. “Scholars could say, until very recently, that even as compared to other court reform efforts, ‘court-packing’ is especially out of bounds. This is part of the convention of judicial independence.

“The commission takes no position on the validity or strength of these claims,” the report’s summary added. “Mirroring the broader public debate, there is profound disagreement among commissioners on these issues. We present the arguments in order to fulfill our charge to provide a complete account of the contemporary court reform debate.”