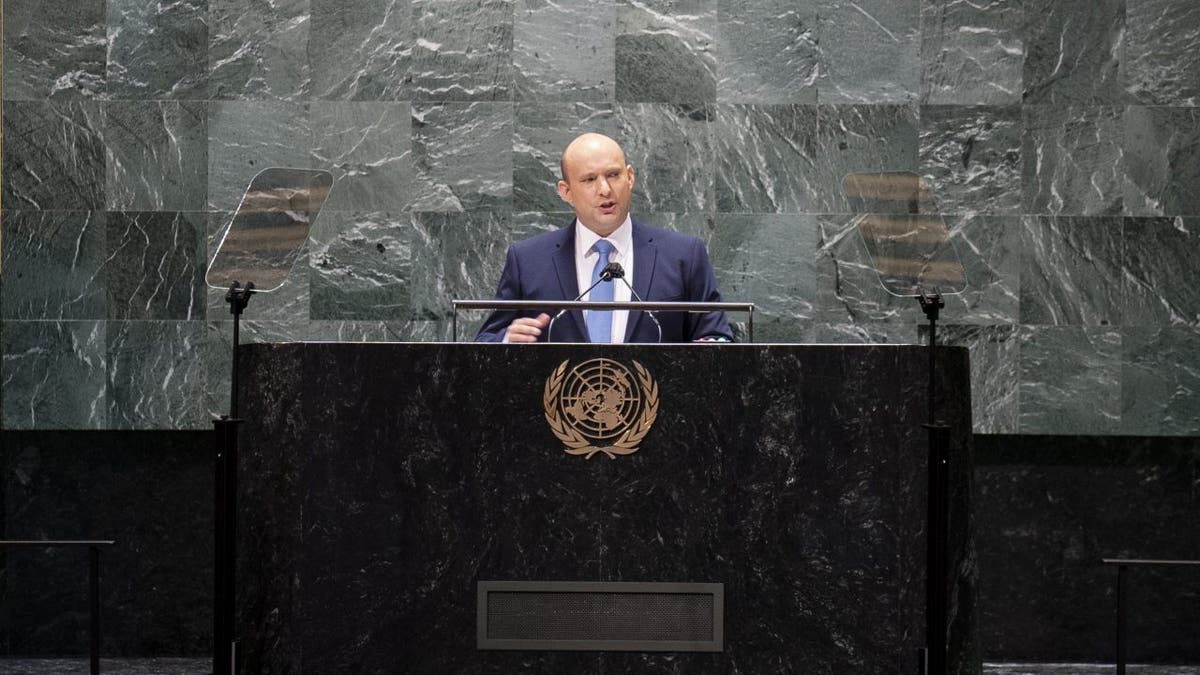 Israeli Prime Minister Naftali Bennett called on the international community to join him in preventing Iran from getting a nuclear weapon, thanked old and new allies for standing by the Jewish state, and chastised those who oppose Israel out of ignorance.

Addressing the United Nations General Assembly for the first time since taking office, Bennett expressed appreciation to the United States for its recent vote to provide $1 billion in funding for its Iron Dome missile defense system, welcomed the support of 38 countries that rejected the UN’s Durban Conference due to its anti-Israel history, and called out those who continue to denounce his country.

Bennett called on the international community to join him, specifically to address Iran and the Islamic nation’s continuing push toward a nuclear weapon.

“Iran’s great goal is crystal clear to anybody who cares to open their eyes,” Bennett said, claiming that Iran wants to dominate the Middle East “under a nuclear umbrella.” He pointed to Iran’s funding of terrorist groups such as Hamas and Hezbollah, and its use of proxies in Syria, Iraq, Lebanon, Yemen.

Bennett also discussed new Iranian President Ibrahim Raisi’s history, which earned him the nickname “the Butcher of Tehran” after participating in a panel that oversaw the execution of political activists in 1988.

Today, he warned, Iran is getting closer than ever to having nuclear capabilities, and has been ignoring inspectors and international agreements. Despite this, he claimed, the world has failed to take action, either out of a sense that an Iranian nuke is inevitable, or due to just being “tired of hearing about it.” He said Israel does not have the luxury of sitting idly by.

“Israel will not allow Iran to acquire a nuclear weapon,” he declared.

The prime minister then called on other countries to join him, claiming that Iran is weak due to its failing economy and their regimes detachment from its people.

“If we’re serious about stopping it, if we use our resourcefulness we can prevail,” he said. “And that’s exactly what we’re going to do.”

Bennett made it clear from the beginning of his address that he no longer wanted the narrative surrounding Israel to be focused on controversies with Palestinians, noting that Israel does not view itself through that lens.

“For way too long Israel was defined by wars with our neighbors. But this is not what Israel is about, this is not what the people of Israel are about.” Bennett said. “Israelis don’t wake up in the morning thinking about conflict. Israelis, like everyone else, want to lead a good life, want to take care of our families, and build a better world for our children.”

He noted that this does mean that Israelis including him occasionally must be called to defend their country. Still, he said, “Israelis remember the dark wars of our past but remain determined to look ahead.”

Bennett said that Israel is “eager to contribute to the world despite being in the toughest neighborhood on earth,” before discussing how Israel has handled the coronavirus pandemic and vaccination efforts.

“We’re in a race against a deadly virus and we have to stay ahead of it,” Bennett said, explaining that Israel’s model is based on widespread home testing and early vaccination (including third booster shots).

“The country must stay open,” Bennett said, emphasizing the need to revive the economy and send children to school, and insisting that “lockdowns, restrictions, quarantines aren’t the way.”