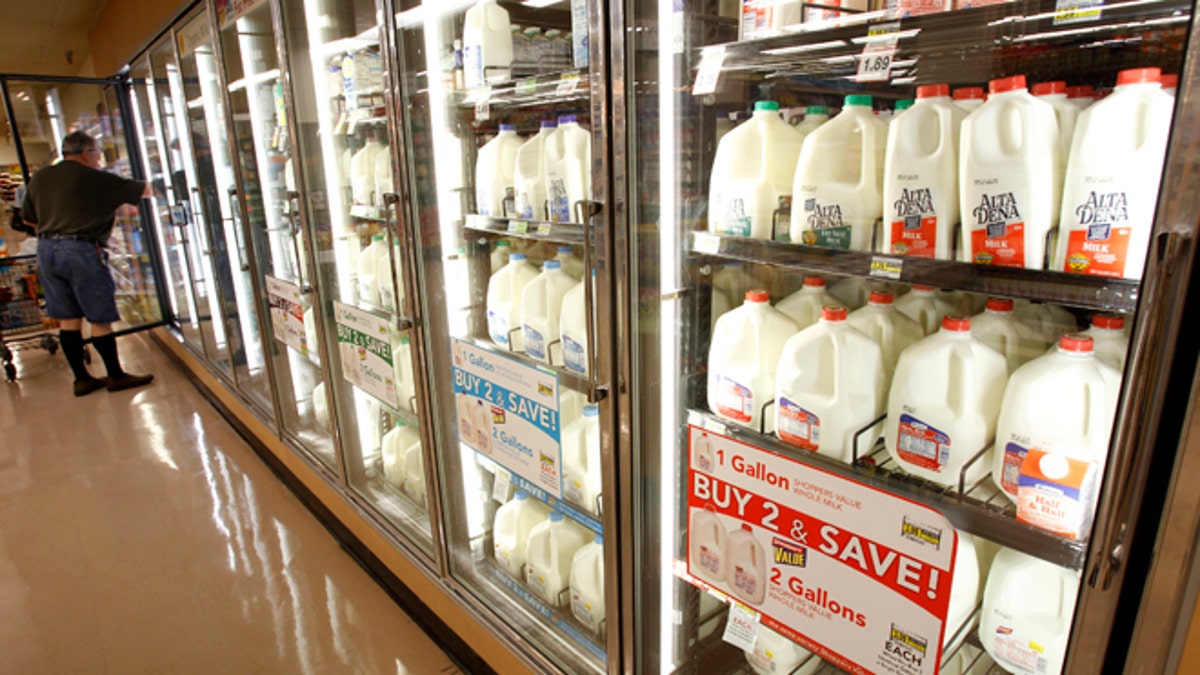 Voter concern over inflation remains sky high, as more voters blame higher prices on the pandemic than on the government. At the same time, over half rate their family finances positively — and far fewer are looking for help from Uncle Sam than last year.

That’s according to the latest Fox News survey released Wednesday.

Nearly half, 47 percent, say the message they would like to give the federal government is “leave me alone,” up from 36 percent a year ago. On the other side, 44 percent say they would tell the government “lend me a hand.” That’s down significantly from 57 percent who felt that way last August.

That shift comes almost completely from Republicans. A year ago, they were more likely to ask the government to “leave me alone” than “lend a hand” by a slim 3-point margin (48-45 percent). Now, Republicans are firmly in the back-off camp by 56 points (75-19 percent). Some 69 percent of Democrats would tell the government “lend me a hand.” It was 71 percent in 2020. 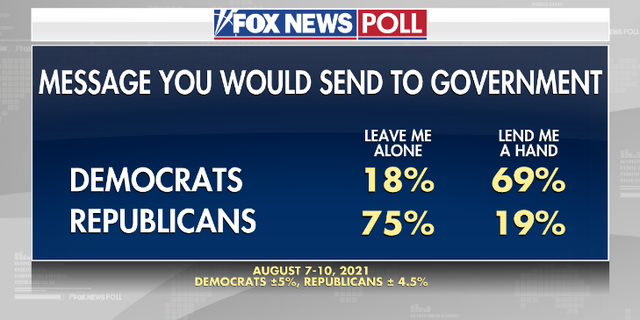 Still, the overall number looking for the government to leave them alone is down from the 55 percent who felt that way before the pandemic (February 2019) and well off the 59 percent high set in August 2014.

While many voters (53 percent) say increases in housing costs are a financial hardship for their family, the difficulty is more widespread when it comes to higher prices for groceries (70 percent) and gas (67 percent). 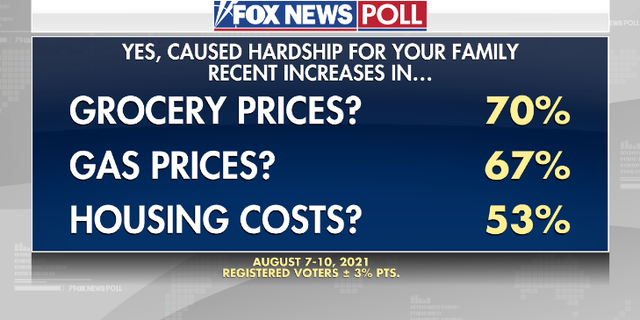 About three-quarters of those with income under $50,000 say both grocery and gas prices are causing them financial hardship — and just over half of those at the $100,000 or more income level say the same is true for them.

“The degree to which lower-income households are feeling the squeeze on food and fuel is striking, if not surprising, and highlights the risk that inflation could push families on the brink over the financial edge,” says Democratic pollster Chris Anderson, who conducts the Fox News Poll with Republican counterpart Daron Shaw.

When asked about their personal finances, 53 percent of voters rate them positively (excellent or good), including roughly the same number of Democrats (57 percent) and Republicans (52 percent).

It’s a different story when it comes to the national economy, where partisanship takes hold: nearly three times as many Democrats (43 percent) as Republicans (15 percent) give the economy positive ratings.

Overall, 29 percent say the economy is in excellent or good shape. That’s unchanged from 29 percent in April, but down from 38 percent last September. A 71 percent majority gives the economy negative marks (only fair or poor). 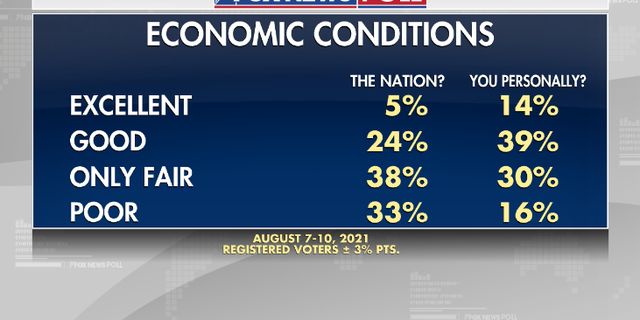 Most (86 percent) are concerned about inflation — and they see lots of reasons for it. Eighty-six percent think the pandemic is responsible for rising prices, while 79 percent blame the government’s economic policies, and 72 percent point to the regular ups and downs of the economy. 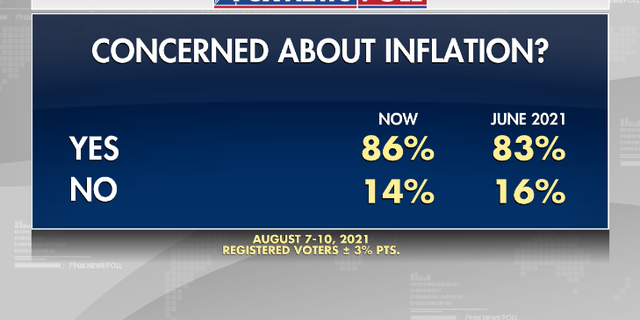 About equal numbers of Democrats (89 percent) and Republicans (84 percent) point to the pandemic for price hikes, while by a wide 29-point margin, more Republicans (93 percent) than Democrats (64 percent) blame government policies. 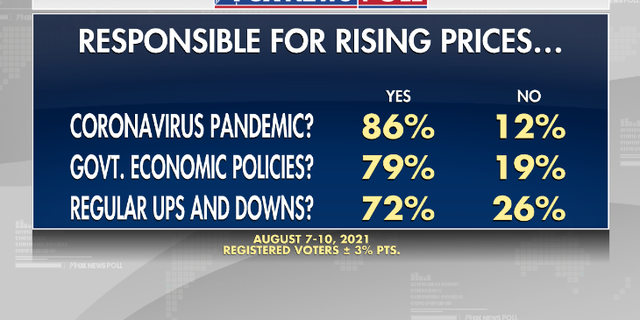 Approval of President Joe Biden’s handling of the economy dips 4 points since June and now splits (47-49 percent). His approval is also down 6 points on immigration (35-57 percent) and down 10 points on what is still his best issue — coronavirus (54-42 percent).

Even with that erosion on specific issues, approval of Biden’s overall job performance remains above 50 percent. Currently, 53 percent of voters approve and 46 percent disapprove. Last month, it was 56-43 percent. He garners the approval of over 9 in 10 Democrats (93 percent), more than half of independents (52 percent), and about 1 in 7 Republicans (14 percent).

For comparison, during the first months of former President Trump’s term, he averaged 84 percent approval among his GOP party faithful, 41 percent among independents, and 8 percent among Democrats.

— Sixty percent of vaccinated voters rate their family finances positively, compared to 39 percent of those who are unvaccinated. 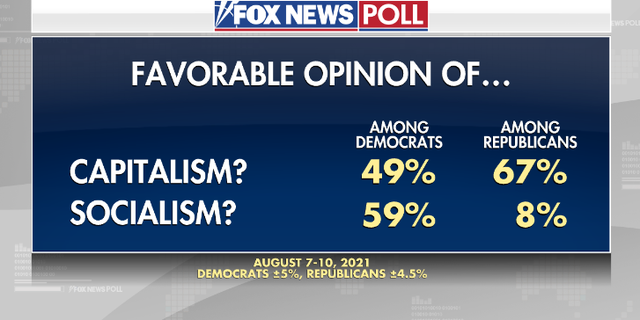 — Majorities like the infrastructure packages being considered by Washington lawmakers. Sixty-two percent favor the $1 trillion U.S. Senate package that focuses on roads, bridges, and rail service, and 56 percent favor the additional items such as climate change and childcare included in the U.S. House’s $3.5 trillion package. Both of these majorities are driven by support from nearly 9 in 10 Democrats.  Fewer than 4 in 10 Republicans agree.

The Senate passed its $1 trillion infrastructure package Tuesday, and the vote was notably bipartisan: 19 Republicans joined 50 Democrats in approving the bill. Could this ease the worry of the 83 percent of voters who are extremely or very concerned about political divisions within the country? Inflation (86 percent) is the only issue that concerns more voters, and almost as many cite violent crime (81 percent) and health care (78 percent).

Note: Three out of the four nights of interviewing were completed before the infrastructure legislation passed the Senate.

Conducted August 7-10, 2021 under the joint direction of Beacon Research (D) and Shaw & Company Research (R), this Fox News Poll includes interviews with 1,002 registered voters nationwide who were randomly selected from a national voter file and spoke with live interviewers on both landlines and cellphones. The total sample has a margin of sampling error of plus or minus three percentage points.