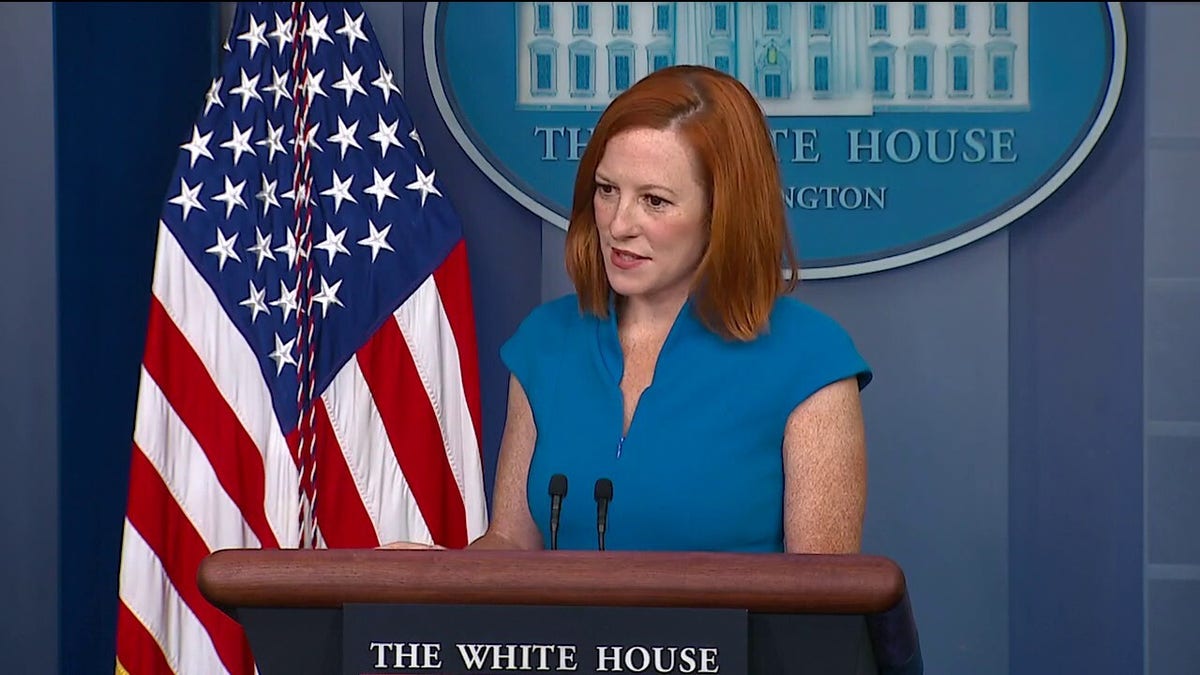 Concerns about coronavirus are rising again — and the political divisions over the country’s response are stark, according to a new Fox News survey released Wednesday.

The poll asks voters, when it comes to U.S. policies on COVID vaccinations, what’s more important — protecting the freedom of Americans to choose whether to get the shot or protecting the safety of Americans by requiring the vaccine to participate in activities. 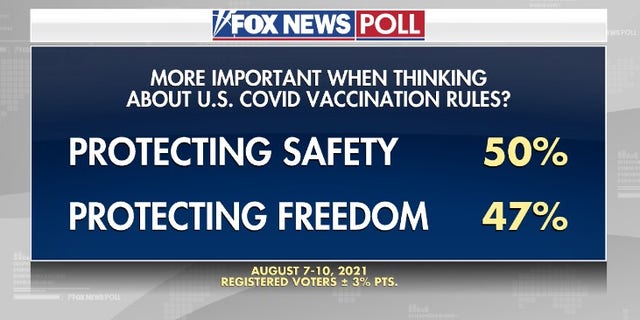 In addition, voters narrowly favor cities requiring customers and workers to have proof of a vaccine for indoor activities like restaurants and gyms (50-46 percent). 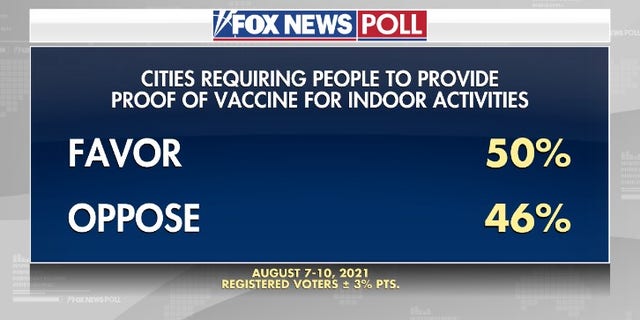 By a wider 20-point margin, however, they are more likely (44 percent) rather than less likely (24 percent) to shop at stores that require a vaccine or negative COVID test.  In most demographic groups, those who are more likely to patronize stores that require a vaccine outnumber those less likely to do so. The exceptions include: Republicans (20 percent more likely and 39 percent less likely for a net -19 points), conservatives (-9 points), and White evangelical Christians (-7 points).

With the recent rise of the delta variant, voters are generally less optimistic in their views on the pandemic. The portion “very” concerned about coronavirus spreading is up 11 percentage points since April (the last time the question was asked), and the number who currently think the virus is under control is small (25 percent mostly/completely) — and down significantly from May (46 percent). That drop in belief that COVID is under control comes from both Democrats (-28 points) and Republicans (-20 points). 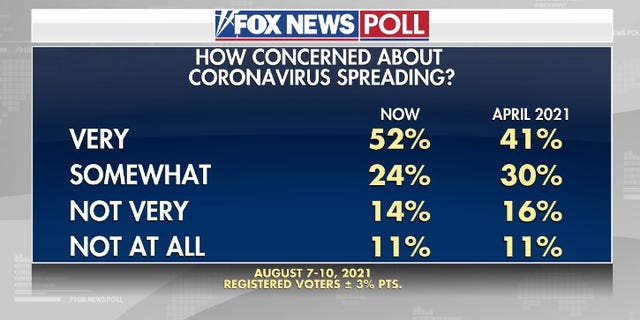 Still, some bare faces are back.  About half (49 percent) report wearing a mask all or most of the time when they are in public, down from two-thirds in May (67 percent).  It was a record 81 percent last July. 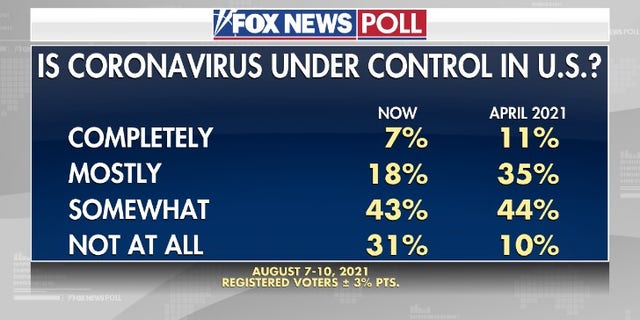 Since the start of the pandemic, federal guidance for wearing masks has changed many times.  Voters split over what prompts those changes:  46 percent say it has more to do with politics, while 42 percent think it comes more from learning new information about the virus. Democrats say information drives the guidance (67 percent) and Republicans say it’s politics (69 percent). 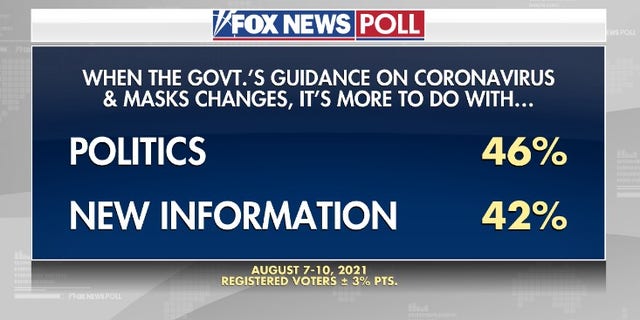 Approval of President Joe Biden’s handling of the pandemic dropped 10 points and stands at 54 percent.  It was 64 percent in June.  Even with that decline, it’s his best issue.  Some 47 percent approve of Biden on the economy, 39 percent on crime, and 35 percent on immigration.

Despite concerns about the virus, 36 percent of voters want their local public schools to fully reopen this fall with in-person learning as usual, while another 33 percent say openings with social distancing and masks.  Fewer, 21 percent, prefer a mix of in-person and remote learning. 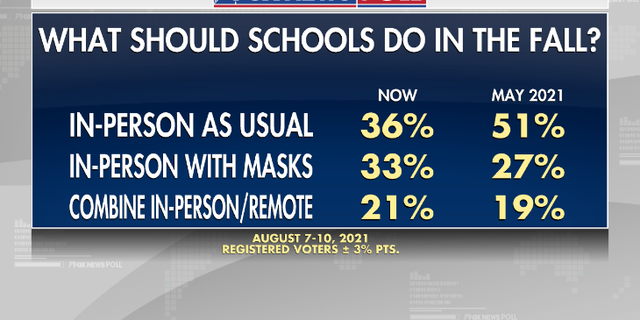 These views represent a sizable shift just since May.  At that time, 51 percent wanted students to attend in person as usual, 27 percent in person with distancing/masks, and 19 percent said a mix.

By a 54-31 percent, voters think schools should be allowed to require unvaccinated teachers and students to wear masks for in-person learning. Forty-eight percent of parents, 55 percent of moms, and 40 percent of dads say schools should make the call.

Vaccinated voters are nearly twice as likely as those who are unvaccinated to be “very” concerned about coronavirus spreading (62 vs. 32 percent). 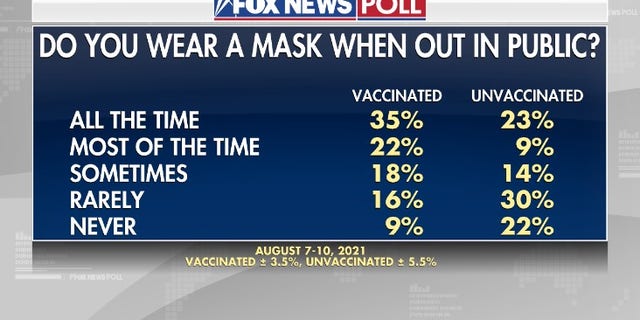 Conducted August 7-10, 2021 under the joint direction of Beacon Research (D) and Shaw & Company Research (R), this Fox News Poll includes interviews with 1,002 registered voters nationwide who were randomly selected from a national voter file and spoke with live interviewers on both landlines and cellphones.  The total sample has a margin of sampling error of plus or minus three percentage points.