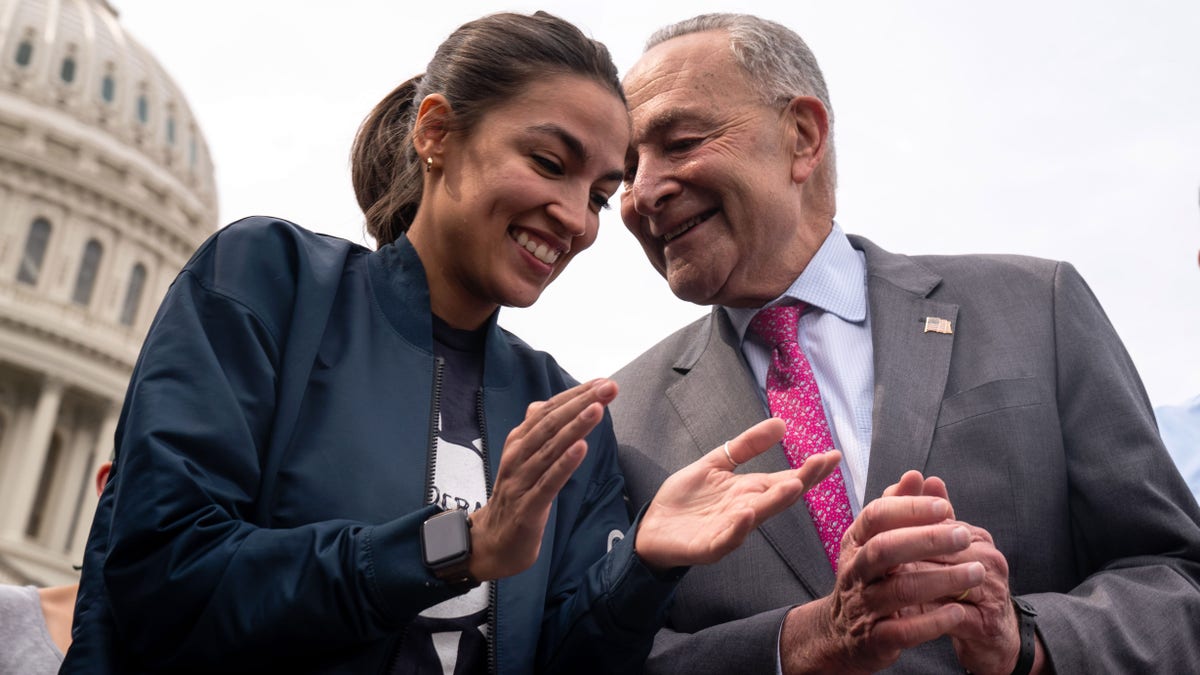 Rep. Alexandria Ocasio-Cortez, D-N.Y., has diminished the chance of a successful primary run against New York Democratic Sen. Chuck Schumer after she was filmed crying on the House floor following a vote to give another $1 billion to Israel to restore its Iron Dome missile interception system.

Last week, after she initially voted against the Iron Dome funding and later amended her vote to “present,” Ocasio-Cortez was accused of shedding “crocodile tears.”

Last month, Ocasio-Cortez refused to rule out a primary challenge next year against Schumer, the Senate majority leader, while insisting that the two of them have been “working very closely.”

The Jewish Telegraphic Agency, an international news agency and wire service which monitors Jewish voting patterns over time, noted the “vast majority of New York City’s Jews — like all New Yorkers — are registered Democrats.” The agency also reported that in metropolitan New York “only 55 percent of Jews say they lean Democratic and 31 percent lean Republican.”

Jessica Tarlov, a Fox News contributor and political analyst who serves as senior director of research and consumer insight for Bustle Digital Group, says Ocasio-Cortez should be wary of “crossing Jewish voters.”

“AOC has proven herself to possess an incredible amount of political savvy, but winning statewide is a whole other beast,” Tarlov said, noting Ocasio-Cortez’s victory “in an extremely low-turnout election with an opponent who didn’t even show up to debate.”

“Balancing the preferences of New Yorkers as a whole means that there is little room for anti-Israel policy at the very least, with Schumer even siding with the Trump administration on moving the embassy to Jerusalem,” Tarlov added. “Crossing Jewish voters – and the lobby – is inadvisable.”

But Doug Schoen – a political pollster, consultant and former adviser to Bill Clinton – insists Ocasio-Cortez would never be very successful at drawing Jewish voters in the Empire State in a run against Schumer, who is Jewish.

“The vast majority of Jewish voters support Schumer, will stay with him, and it really doesn’t matter what AOC says or does,” Schoen said, noting that Ocasio-Cortez is “perceived as anti-Israel.” Following her meltdown on the House floor, Schoen said it is “now confirmed [Ocasio-Cortez] is anti-Israel.”

“She is very hostile to Israel and to Jews,” Schoen added. “She will get virtually no support in the Jewish community, but if she were to run she would be running without any expectation of getting Jewish support.”

According to City & State New York, the Empire State is home to 1.75 million Jews, with an estimated 1.1 million located in the five boroughs, the largest concentration of Jews in any state and far more than in any country besides Israel.

Schoen, who is Jewish himself, said Ocasio-Cortez would not find her actions and tears to be “politically damaging, giving her constituency and appeal.”

But “it doesn’t help,” Schoen concluded of Ocasio-Cortez’s tears, discussing whether it would harm a potential Senate run.

“I think it would be a primary driven by ambition more than by need,” Jacobs said at the time.

Ocasio-Cortez apologized and attempted to explain her tears in a letter written to her constituents, which was shared to Twitter.

“Yes, I wept,” Ocasio-Cortez said. “I wept at the complete lack of care for the human beings that are impacted by these decisions, I wept at an institution choosing a path of maximum volatility and minimum consideration for its own political convenience.”