'Witness to Dignity': What I experienced at Barbara Bush's bedside in her final days

This season of the year — the weeks that rest between Thanksgiving, and the beginning of the holy days of Hanukkah and Christmas — our minds and hearts naturally begin to turn to things that really matter.  In early November, the nation was drawn into the elusive web of believing that politics, power and prestige are the highwater mark for one’s days on planet earth, but first lady Barbara Bush had it right when she shared her oft repeated mantra, “When all the dust is settled and all the crowds are gone, the things that matter are faith, family and friends.”

This is certainly something I witnessed in our 11-year relationship, and perhaps with its greatest intensity in her last days as she prepared to leave this life for the next. Thank God for her timely reminder and potent wisdom.

What follows is an excerpt from my new book, “Witness to Dignity,” about Mrs. Bush’s final days. 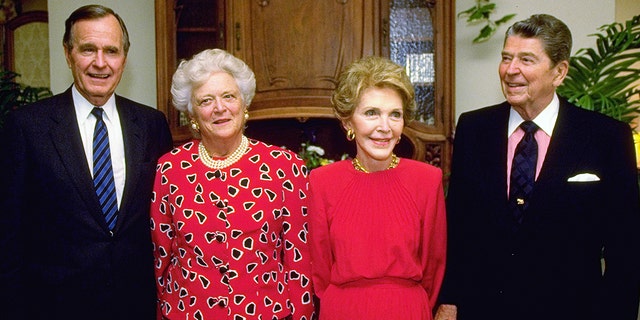 She was lying with her eyes closed, but she said in a loud, clear voice, “I’m not checking out yet!”

I told her, “I understand, Bar, but your husband asked me to come pray with you.”

We visited for a bit, I anointed her head with oil, and I prayed for her. I gave her a kiss on the forehead and said, “I love you.”

The only thing I heard her say during the day was, “Home . . . home,” which she whispered once or twice. Since I did not leave her side during the day, especially over her last several hours, this was, in fact, the last word she spoke: “Home . . .” She was clearly, clearly ready.

I left the room, pulling the door all but closed and talked to two of the hospice care nurses in the next room—both of whom felt like Barbara’s death was imminent. That is when I heard her call out, so I stepped back to the door, opened it, and asked “Bar, are you okay?”

I went downstairs and said, “Mr. President, she said two things: she said, ‘I’m not checking out yet,’ and ‘Tell him I adore him.’” There were more tears, and then we circled up for dinner, and to wait. After dessert, the president was ready to go on to bed, and he bid us all good night. 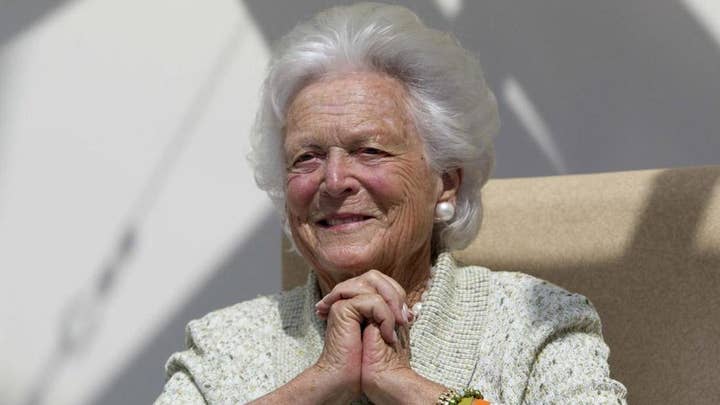 In my work, I have often seen those close to death “rally” for a day or two after a serious dip. Barbara had a rally for the ages. She knew what was coming, so much of Sunday and Monday was spent on the phone, calling friends and loved ones.

On Tuesday morning, April 17, about 9:00 a.m., the phone rang. It was Evan: “We are there this time.” I quickly made it over to the house. The president was already with Bar, holding her hand.

Though Bar was not able to respond, President Bush 43 called and spoke to her over the speaker phone as did Jeb and Doro. 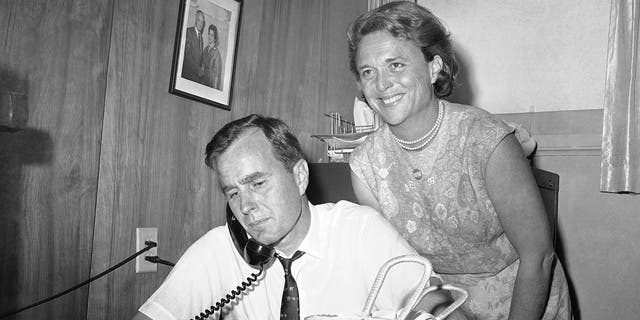 FILE – In this June 6, 1964, file photo George H.W. Bush, candidate for the Republican nomination for the U.S. Senate, gets returns by phone at his headquarters in Houston, as his wife Barbara, smiles at the news. Bush died at the age of 94 on Friday, Nov. 30, 2018, about eight months after the death of his wife, Barbara Bush. (AP Photo/Ed Kolenovsky, File)

The president was with her the entire day, holding her hand. The only break he took was about 2:30 p.m. to get his daily massage on the third floor. Given his physical challenges with Parkinsonian syndrome, daily massages were absolutely essential—but this was his only time away. However, about 3:00 p.m., the power went out. The power almost never goes out in this area, but it did. There was a quick scramble for battery backup to make sure there was no break in Bar’s oxygen. The power stayed out.

Bar was comfortable the entire day—she never called out or indicated she was in pain or discomfort. The only thing I heard her say during the day was, “Home . . . home,” which she whispered once or twice. Since I did not leave her side during the day, especially over her last several hours, this was, in fact, the last word she spoke: “Home . . .” She was clearly, clearly ready.

We knew it was close but did not know when it would be, so I went to the side garden of the house and prayed. I gave thanks for Bar’s life and prayed that if this was the time, then let it be the time—a peaceful and painless death.

Given her steady decline, and not waiting on the local power company to set things right, it was decided to bring the president back downstairs so he could sit with Barbara until the end. If I heard it once, I heard it two dozen times—as he sat there, holding her hand throughout the day, he said, “Bar . . . I love you . . . I love you, Bar” with such brazen passion and tenderness it was palpable. At one point, when he, she, and I were together alone, he looked at me, gently smiled, pointed at her, and then pointed toward heaven. “Yes, sir,” I said. “That’s where she will be.” 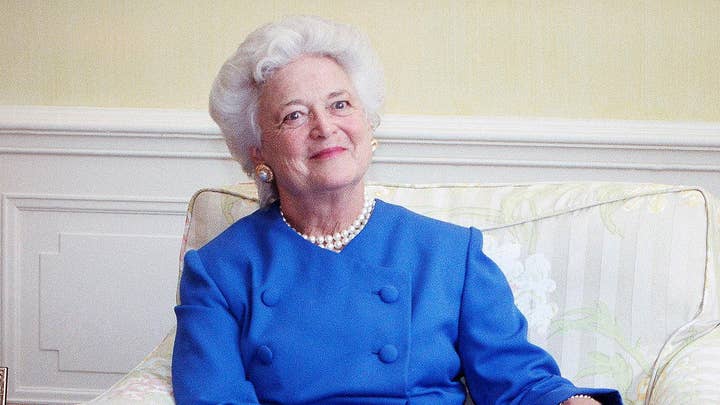 At 5:30 p.m. the power was still out. By then, Bar’s physician had arrived and both he and Evan told everyone, “We are there . . . If there is anything you want to say, now is the time to say it.” Neil asked me to pray again. I anointed her head with a cross of oil. The president was holding her hand, as he had been all day. Everyone in the room—all of us—then knelt by her bed—Neil and Maria, Pierce and Sarahbeth, Evan, Neely, Marshall, and I. We all put our hands on her—and again, prayed

As we prayed, we wept, and we held on to one another, and we held Barbara. In my entire life, this was one of the few moments where the demonstrable presence of God was as real to me as the pages of the book you are now holding.

When I finished with “Amen,” everyone was weeping and telling Bar, “I love you.” The doctor was near, and Bar took her final breath. “She’s gone,” he whispered. The president asked him to repeat it. “She’s gone to heaven, Mr. President.”

The Celtic Christians teach about something they call “thin places.” Thin places are those times and moments, people and experiences, that you have or encounter and for whatever reason—at that juncture, at that meeting point—the line between heaven and earth is so thin it is hardly detectable, if detectable at all. I will share a few of those “thin places” with you in this book, and here is one. 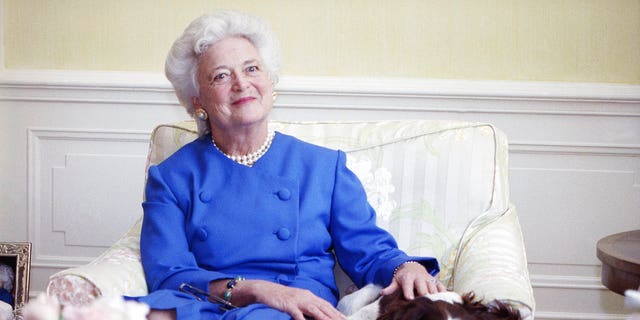 At the moment that Bar’s physician said the second time, “She’s gone to heaven, Mr. President,” at that very moment, the lights—the power—came back on . . . in that instant.

We were still all kneeling, still all weeping. Maria lifted her head, looked at me, and whispered, “What does that mean?”

Now was a time for family, not for those of us who were not—so Evan, Neely, the doctor, and I left and the door closed. We were quietly standing in the hall outside the room. Pierce opened the door and said, “Russ, he wants you to come and pray again.”

As we prayed, we wept, and we held on to one another, and we held Barbara. In my entire life, this was one of the few moments where the demonstrable presence of God was as real to me as the pages of the book you are now holding.

So I came in and knelt in front of the president and by Bar’s body.  I placed their hands together—his on top of hers—and put my hands around both of theirs. I gave thanks for her life. I prayed that God would welcome one of his own. I prayed that God would comfort the president and all Bar left behind. I thanked God for the love and witness of these two and this wonderful family. When I finished, the president and I both were in tears, but while I was still on my knees, I took his face in my hands and said, “Mr. President, she is at peace now. She is in heaven. She is with her parents and your parents, and she is with your dear Robin. And you will see her again.

“I love you,” he said. I kissed him on the cheek and stepped back out of the room. It was, up to that point, the most intense moment in my ordained ministry. God was present and real and there—in that moment.

And Barbara? Barbara was home.