Tucker: Draconian COVID policies in Australia may be coming to the United States 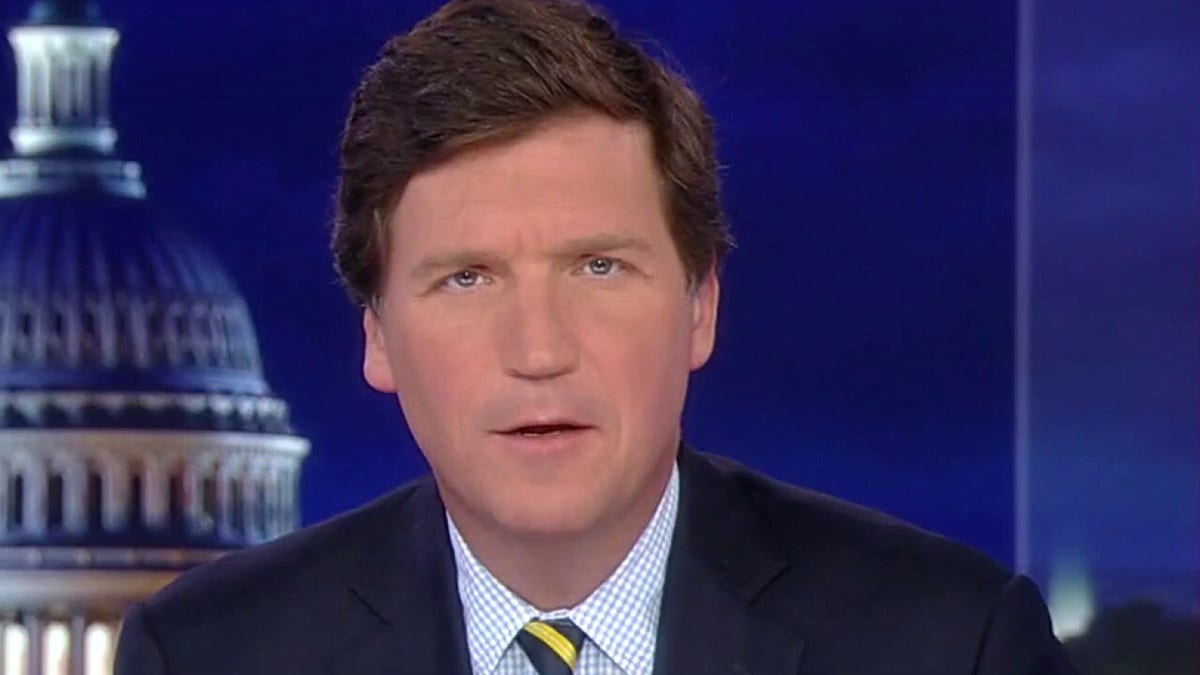 One thing about Americans: they love Australia. Most Americans have never been there. It’s an awfully long way away. But when Americans think of Australia, they imagine a freer, tougher version of themselves. Steve Irwin, Crocodile Dundee, that kind of thing. So there’s a huge reserve of affection in the United States for Australia, its culture, and its people. It’s also possible most Americans, us included, have not updated our assumptions about Australia in a while. The modern reality is a little different from what we imagine.

Case and point: In June of 2019, federal police in Sydney, Australia raided the offices of the state broadcaster, ABC. They weren’t at all unclear about why they were raiding the offices. They said it out loud. Just days before the raid, ABC broadcast allegations from a whistleblower that embarrassed Australia’s government. This whistleblower said that Australia’s military leaders had killed civilians in Afghanistan, including children, and had lied about it. ABC broadcast that story.

It wasn’t a crime to broadcast the story, and Australia’s federal police didn’t pretend it was. Instead, they served ABC with a warrant that authorized them, the police, to cover up the evidence of the military’s misconduct. The warrant, and we’re quoting, allowed police to “add, copy, delete, or alter” any material they wanted to alter on the broadcaster’s computers.

That’s not the kind of thing that happens in a free country, to put it mildly. And yet, Australia’s military and police forces never suffered any consequences for doing it; In fact, many Australians supported it. They rewarded their military with hundreds of millions of dollars in new spending — most of that money was intended to keep Australians safe from the malign influence of “Chinese authoritarianism,” even though that seemed a lot like Chinese authoritarianism itself.

Two years later, what does Australia look like? It looks a lot like China did at the beginning of the pandemic. We showed you those images from China at the time — the people being welded inside their apartments to starve, the guys in hazmat suits forcing people in quarantine boxes and driving away to some unknown destination. At the time, our public health officials, including Tony Fauci, told us nothing like that could ever happen in our country or in the west. But that was wrong because those things are now happening in Australia. This is what happens in Australia if you try to leave your apartment:

REPORTER: Anthony Karam knows he’s COVID positive when he steps into this public lift. Already breaking so many rules, he doesn’t bother to cover his mouth as he sneezes and splutters. The 27-year-old is still infectious but has gone missing from his Wentworth Point apartment, the warrant now issued for his arrest.

HEALTH MINISTER BRAD HASSARD: This 27-year-old chap who apparently has expressed the view that he doesn’t care less whether he spreads the virus is one example of the worst of the worst.

So a national manhunt for a man who sneezed in an elevator. That’s the state of play in modern-day Australia. Not everyone in the country is on board with this, but since Australians were completely disarmed by their government several years ago, there’s precisely nothing they can do about it, so it’s accelerating. Look at what’s happening now. They’re being crushed. The scene in Melbourne (the second-most populous city in Australia) over the past month was chaos.

Is the government cracking down on Islamic extremists, dangerous revolutionaries in their midst? No. Just ordinary Australians complaining, demonstrating peacefully against the lockdowns, beaten by police.

You’ve seen a lot of footage from Australia that shows the chaos, but something that’s not immediately obvious from the American vantage is this is not all of Australia. The whole country is not locked down. In Australia, most of the lockdowns are in the eastern part of the country, that’s where the capital of the country is and where the federal government has the most control. Western Australia, home to most of the country’s national resources, isn’t locked down at all. 50,000 fans just crowded inside a stadium for a rugby match in Perth, the capital of Western Australia; no one beat them with nightsticks or hosed by the police. The rugby match was not a super-spreader event. Western Australia has virtually no COVID cases.

How did that happen? How does Western Australia not lockdown but remain virtually COVID-free? Simple. By controlling its borders. Western Australia didn’t allow thousands of people to stream in from anywhere they wanted to in the world. They’re not Texas. They didn’t care about protecting their borders. They’re not worried about being called racist. It seemed common sense, and it worked.

That’s interesting because the problem with Australia’s economy does not come from Western Australia closing its borders. It comes from the lockdowns. Those are the biggest drag on the national economy ever conceived in Australia. So are those police SWAT teams beating people for going outside.

COVID mandates are a far greater threat to Australia’s economy and its social fabric than COVID itself. The Queensland health minister, in eastern Australia, explaining that outdoor mask mandates are necessary because of two new COVID cases. Not two thousand, but two:

QUEENSLAND HEALTH MINISTER YVETTE D’ATH: What these two cases mean is that we will be extending immediately the directive in relation to mask-wearing to the Gold Coast.

We want to pause for a moment to give you a sense of the scope of the pandemic in Australia: To date, COVID has caused 1,300 “recorded deaths” in the entire country. Australia has 25 million people. That 1,300 figure includes people who “died with probable COVID,” whatever that means.

In Alberta, Canada, the health minister just announced that anyone who stays home from any illness will be counted by the Canadian government as a COVID patient. Then she pretended she didn’t say that because it’s obviously insane, but it’s on video, so we know she did.

In Australia, the government has adopted a similar standard — anyone who leaves home is apparently being counted as a COVID patient. A man in Melbourne on Sunday made the mistake of walking outside a block from his home:

WOMAN: He lives a block away!

WOMAN: He has a face mask in his pocket. He was just smoking a cigarette. He just came to get lunch with me.

MAN: And the reason I didn’t have a mask on was I was having a cigarette. I have two masks in my pocket. What do you want me to do?

Here’s the interesting thing – apart from that’s obvious authoritarianism, it’s terrifying that could happen in a civilized English-speaking country, Australia of all places – notice the police didn’t ask the man if he’s been vaccinated. You think that’d be the first question they’d ask. Vaccination works, doesn’t it? That’s why it’s mandatory, right?

That’s an important point because publicly, Australia’s leaders are still pretending vaccination status matters. In New South Wales — again, Eastern Australia — one official promised that the unvaccinated will be allowed to retain their freedoms:

DEPUTY PREMIER OF NEW SOUTH WALES JOHN BARILARO: The message to the unvaccinated is that you will not achieve any further freedom unless you get vaccinated and finally my message to south wales … There will be individuals in South Wales who choose not to be vaccinated who will lose their freedoms on the 11th of October.

No more freedom if you don’t get the vax, but, they will arrest you for being outside smoking a cigarette a block from your home without a mask, and not even ask you whether they’ve been vaccinated. So if vaccination status is that important as a health matter, wouldn’t that be the first question you ask? But they didn’t even bother.

Meanwhile, in the same state — New South Wales — Australian officials are telling people that whether they’re vaccinated or not, they can’t go to church:

PASTOR: In the name of Jesus, lockdowns are over, in the cities of New South Wales.

REPORTER: It’s unclear what passage this pastor is preaching from, but it’s not the public health order. His church the Christ Embassy in Blacktown is in lockdown, hard lockdown. … There was no QR code on the door. Costing the organization 5,000 dollars. Each of these thirty adult worshipers fined a thousand dollars.

POLICE OFFICER: Whether it’s a soccer match, whether it’s a church service, it doesn’t matter. You cannot gather as they did at Blacktown.

Oh, so you have to get vaccinated to get any of your freedoms, but even if you are vaccinated, you’re not allowed to go to church. So what is the point of vaccination? Why did the federal government in Australia lock everyone down if there’s no actual way to stop the lockdowns. And more to the point, why do they want open borders in Western Australia if closing the borders has actually kept the population safe.

They want open borders there for the same reason they want them here. In New South Wales, one official — the health officer — made it explicit:

DR. KERRY CHANT: We will be looking at what contact tracing looks like in the new world order. Yes, it will be pubs and clubs and other things if we have a positive case there.

The new world order. She said it out loud. This is a really interesting story, what’s happening in Australia, and what it means for the rest of the Anglosphere, very much including us. And maybe that’s why globally, most media organizations have refused to cover it. That comment barely got any coverage at all. In fact, all the footage we just quoted is mostly being ignored in the United States.

Why? It’s possible what’s happening in Australia might be instructive to us in the United States. In just two years, Australia’s police went from raiding newsrooms to beating people in the street. Maybe the lesson is: Things can change very quickly. One moment, the English-speaking world is mocking China for being dystopian and autocratic.

The next moment, they’re aping China and hunting people down who are two blocks from their home and smoking a cigarette.

This article is adapted from Tucker Carlson’s opening commentary on the Sept. 30, 2021 edition of “Tucker Carlson Tonight.”