Tucker Carlson: The latest case of mass hysteria – the belief men can get pregnant 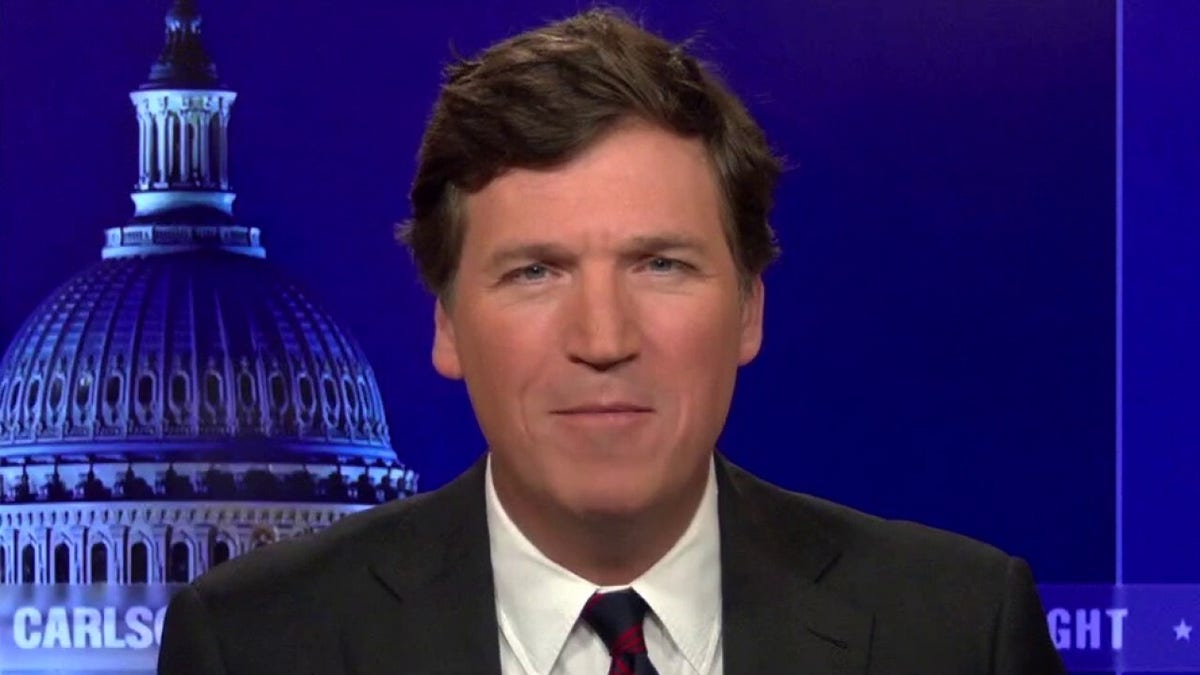 Nobody reads books anymore. All of us get all of our history from Wikipedia. It’s convenient. The problem is, Wikipedia is so politicized and dishonest, that on a lot of topics, certainly anything related to partisan politics, it’s no longer worth reading. There’s too much lying. On the other hand, it’s a big site, and there are some gems remaining on Wikipedia.

If you have a minute this weekend, take a look at the Wikipedia entry on mass hysteria through the ages, before the authorities inevitably delete it, as they certainly will. As you read it, ask yourself if any of it sounds familiar to you. There are witch trials, of course, many of them over many centuries, as well as plagues of spontaneous dancing, mass ghosts sightings, fits of laughing, trembling and babbling that seized entire towns at once for no apparent reason. It’s all there. And then there are the more esoteric outbreaks of mass hysteria. There’s a medieval French nun who, quote, “inexplicably began to meow like a cat, leading the other nuns in the convent to meow as well. Eventually, all of the nuns in the convent began meowing together, leaving the surrounding community astonished. This did not stop until the police threatened to whip the nuns.”

WIKIPEDIA CO-FOUNDER LARRY SANGER BLASTS SITE FOR LEFT-WING BIAS: ‘THE WORD FOR IT IS PROPAGANDA’

It’s hilarious, as you read it. Though at the time, the nuns didn’t see the humor. They sincerely thought they were cats. Hysteria is like that. When large groups of people start acting totally crazy, the reference points disappear. It all seems normal, no matter how nuts it is. With that feature of human nature in mind, think about these statements from yesterday’s hearing before the House Oversight Committee. The topic was legal abortion — but because this is 2021, and we’re all convinced we’re cats, the conversation soon turned to the newly-established scientific fact that men can get pregnant.

ABORTION ACTIVIST MALEEHA AZIZ: And I just wanted to acknowledge, a lot of people are being left out of the discussion today. As we know, people get pregnant and not just women. I hear people say over and over again that women get pregnant but that’s excluding people that should be part of this conversation.

We don’t want to exclude anyone. It turns out that even in 2021, there are still people out there claiming that only women get pregnant. They’d better stop claiming that, or else. Amanda Presto just learned this. Presto is a writer at the Daily Wire, and by the way a woman. She tweeted this thoughtcrime, assuming she had biology on her side. “Demanding others call you by your preferred pronouns and growing out your hair doesn’t make you a woman. Stop demeaning womanhood.”

No, Amanda. You stop demeaning pregnant men. For her attack on the pregnant man community, Twitter shut Amanda Presto down. We’re cats, and that’s all there is to it. And that’s true across the ocean In Britain, the head of the Labour Party has now declared that men, too, can have cervixes. Because of course they can. Meow. A few days later, a senior member of the Labour Party was asked whether she agreed with that observation. This was her reply:

LBC NEWS MONDAY NICK FERRARI, LBC NEWS HOST: Is it transphobic to say that only women have a cervix? Good Morning.

RACHEL REEVES, SHADOW CHANCELLOR OF THE EXCHEQUER: Good Morning. It’s great to be with you. I just think that this issue has just become so divisive and toxic, and it pits people against each other both groups who have faced discrimination in society -women and trans women. I just find this debate incredibly unhelpful and unproductive, to be totally honest.

NICK FERRARI, LBC NEWS HOST: Is it transphobic yes or no?

RACHEL REEVES, SHADOW CHANCELLOR OF THE EXCHEQUER: [Stammering] Is it transphobic? [Stammering]  I don’t even know how to start answering these questions.

Oh, come on, Rachel Reeves, shadow commissioner or whatever you are of the Labour Party. It’s a simple question, it’s not a debate. Do men have cervixes? But she can’t bring herself to say it. On the other hand, she doesn’t dare note the obvious, which is that the entire conversation is completely insane. So she breathes heavily, she harrumphs quite a bit, and she tries to move on to the next topic.

The Washington Post is hoping to avoid moments of uncertainly like this. Jeff Bezos’ newspaper has just issued new style guidance to all of its reporters. “If we say pregnant women, we exclude those who are transgender and nonbinary.”

So no more pregnant women in the Washington Post. It’s an outdated, inherently offensive category, like secretaries and housewives. That’s true in many hospitals too across the country. Some physicians are now punishing subordinates who recognize biological differences between men and women. Dr. Lauren Chong, for example, a pediatric trainee at the Sydney Children’s Hospitals Network, recently told The New York Times that healthcare workers shouldn’t use terms like ovaries and uterus. “You can just say reproductive organs,” Chong said. And that’s an order.

‘THE VIEW’ HOST BRISTLES AT PROGRESSIVE DEMOCRATS’ ABORTION TESTIMONY: ‘I WAS SORT OF CRINGING AT IT’

The problem is that it may actually be medically relevant whether someone has ovaries and a uterus. Reproductive organs might not be specific enough. But honestly, in 2021, when we’re all cats, who cares? Curing disease may be important, but is it more important than not offending the Human Rights Campaign? Probably not.

That’s the conclusion the CDC has reached. The center just released a graphic pointing out that, “Only 31% of pregnant people have been vaccinated.” Not pregnant women, but pregnant people.

And then there’s the Lancet, which not very long ago was considered a serious medical journal, just released a cover with this headline. “Historically, the anatomy and physiology of bodies with vaginas have been neglected.”

So that’s the term. You thought you were a woman, but now you’re a “body with a vagina.” Try to imagine a more dehumanizing phrase. Probably not possible to imagine. At yesterday’s House Oversight hearing, Gloria Steinem showed up to prove she’s still alive and still relevant. For 50 years, Steinem has been, as she describes it, defending women. In the ’70s, she wrote a piece for Cosmopolitan Magazine entitled “If Men Could Menstruate.” As then she was constantly reminding us, “If men could get pregnant, abortion would be a sacrament.” Oh, but now men can get pregnant, so the script has changed a little bit. Here was Gloria Steinem, who we should note is now a cat, meowing, telling us that absolutely anybody can get pregnant, and so anybody can get an abortion.

STEINEM: What’s happening in Texas is not only a local issue or a women’s issue. It’s a step against democracy which allows us to control our own bodies and our own voices. Remember when Hitler was elected, his very first official act was to padlock the family planning clinics and declare abortion a crime against the state, Mussolini did exactly the same thing, because they knew that controlling reproduction and nationalizing women’s bodies is the first step in an all-controlling state.

Gloria Steinem was always pretty dumb, but back when she was 35, nobody noticed. But rewriting history, can’t let you do that. Sorry, you’re not Wikipedia.

GREG GUTFELD: BUREAUCRATS, EXPERTS AND MEDIA WUSSES HAVE THROWN AN ENTIRE GENDER UNDER THE BUS OUT OF FEAR

In fact, Hitler was an enthusiastic eugenicist, just like the founder of Planned Parenthood, Margaret Sanger. Hitler encouraged abortion. According to almost everyone who has studied this – Jeffrey Tuomala, for example, a law professor who’s written extensively about the Nuremberg Trials – Hitler, like Gloria Steinem, supported abortion, not just as a matter of physical autonomy, but as a means of keeping women working and contributing to the economy.

“The Nazis preferred that the Eastern workers not become pregnant so they would not be taken out of the workforce They took measures to identify pregnant workers and to encourage or pressure them into making use of the abortion services the Nazis provided.”

Oh, does that sound familiar? Once again the goal is to reduce women to wage slaves. It is more virtuous to work at JP Morgan than it is to be a mother. That’s what they’re telling you. That’s what Ayanna Pressley is telling you. She complained that abortion bans are tools of — you guessed it — White supremacy. The “experts” at the hearings yesterday agreed:

We’re falling for it again. Rising to the bait, being literal. Correcting insanity because it’s kind of hard to resist. There is no rational conversation about anything currently underway in the United States. We have to say, in the interest of fact-checking, what you just heard is the opposite of the truth. New York City is the biggest city in America. The abortion rate in New York among Black mothers is roughly three times the abortion rate for White mothers. Thousands more Black babies are aborted in New York than are born every year. So, shutting down the abortion clinics in New York, which nobody is even proposing, but if you were to do that, you’d have a lot more black babies than you have now.

But we can’t even get to that conversation, because we can no longer agree that only women have babies. Now men have babies. So for 50 years, they told us men have no interest in whether or not abortion is legal because they can’t have kids, but now they can, so we thought it would be worth weighing in on this.

According to the House Oversight committee, it’s all for your own good:

DOCTOR GHAZALEH MOAYEDI: I know firsthand that abortion saves lives. For the thousands of people I’ve cared for, abortion is a blessing, abortion is an act of love, abortion is freedom. We need federal protection now.

Abortion is freedom, someone finally said it out loud. But is it?

This article is adapted from Tucker Carlson’s opening commentary on the October 1, 2021 edition of “Tucker Carlson Tonight.”