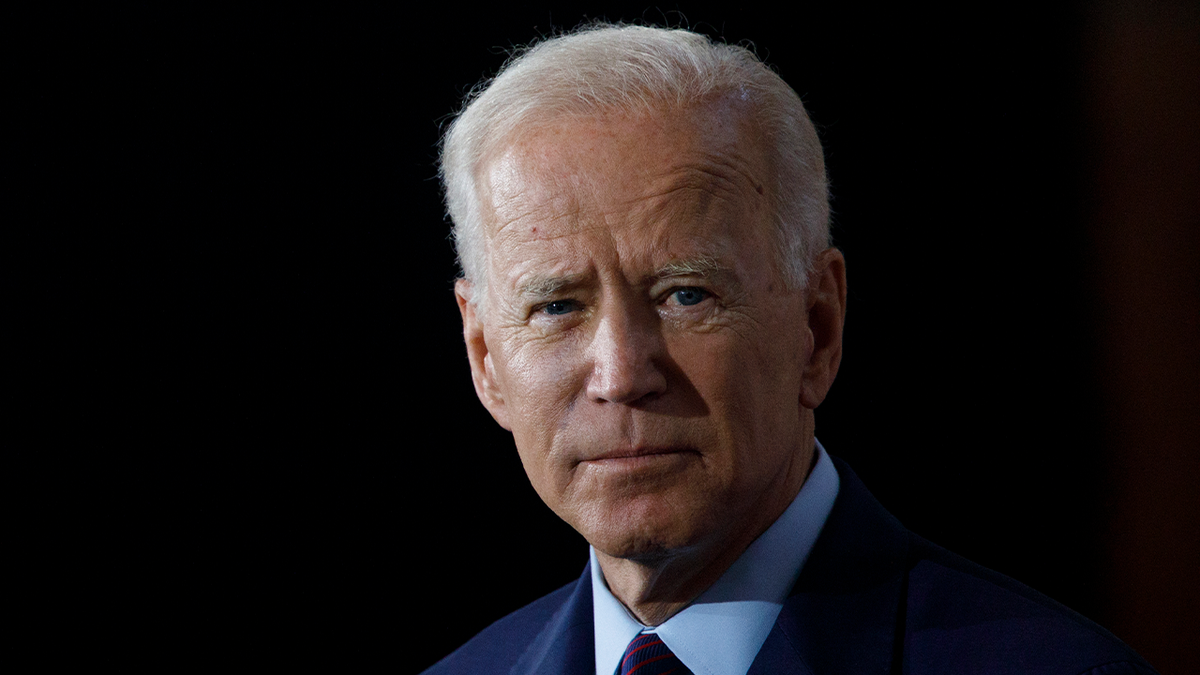 President Biden used the word “unity” eight times in his inauguration speech, but voters say the country is heading in the opposite direction on his watch.

By a 54-37 percent margin, they think the country is less united under Biden rather than more so. 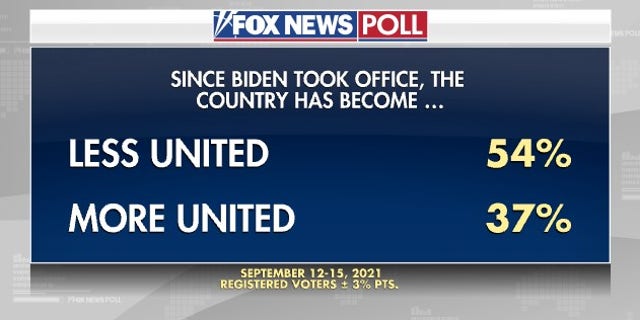 The latest Fox News national survey also finds a dip in the numbers describing him as caring and as a strong leader.

Fifty-one percent think Biden cares about “people like you.” That was 56 percent last year (October 2020).  That five-point shift is mostly due to a 15-point drop among independents.

About half of voters also say Biden has the mental soundness to serve effectively as president (49 percent, unchanged from 2020) and is honest and trustworthy (50 percent, down 2 points).

His lowest ratings are on leadership: 45 percent describe as a strong leader, down from 49 percent last fall. 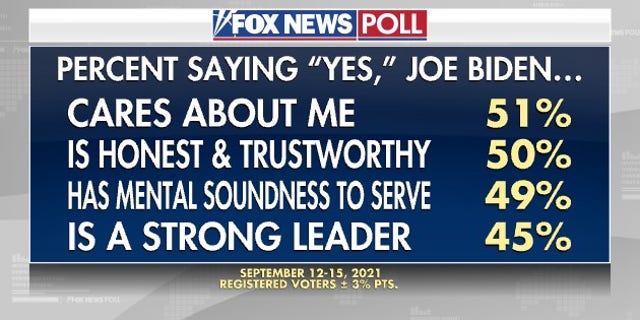 By a 51-45 percent margin, voters see the Biden administration as competent and effective at managing the government. 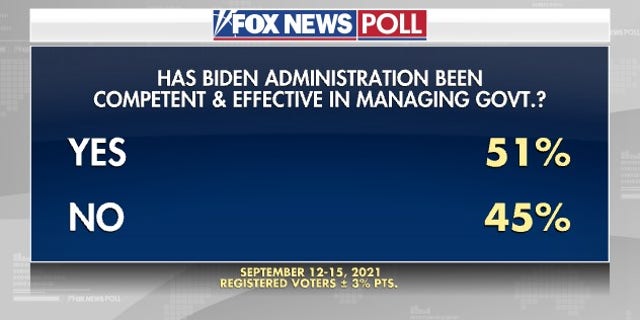 Biden garners his best job rating for his handling of the coronavirus pandemic: 55 percent approve, while 44 percent disapprove. That’s mostly unchanged from August (54-42 percent), but down from 64-34 percent in June.

Views split on his handling of the economy (50 percent approve and 49 percent disapprove) and he’s underwater by 24 points on Afghanistan (36-60 percent).

Among Democrats, 89 percent approve of Biden on coronavirus and 86 percent on the economy, compared to 65 percent on Afghanistan. 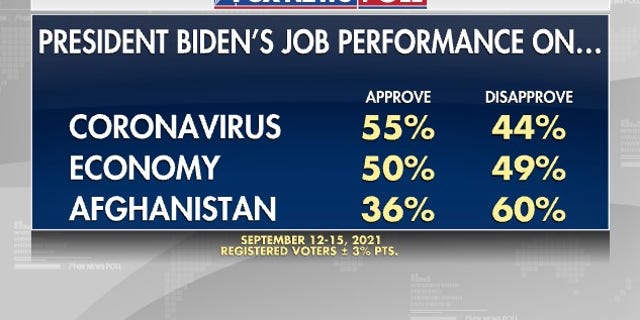 Biden’s overall job rating stands at 50 percent approve and 49 percent disapprove.  Those are the lowest marks of his presidency.  Last month, it was 53-46 percent, and his record is 56-43 percent (June 2021). 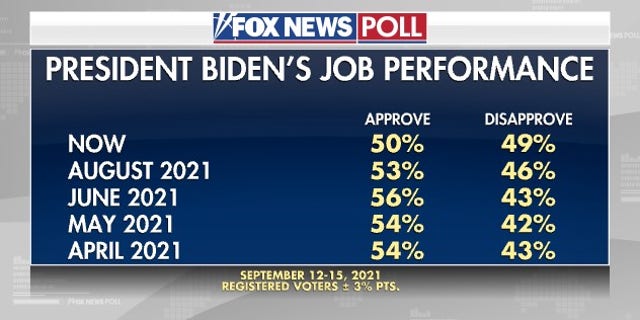 The survey, released Sunday, encouraged people to explain in their own words why they give him the thumbs up or the thumbs down. 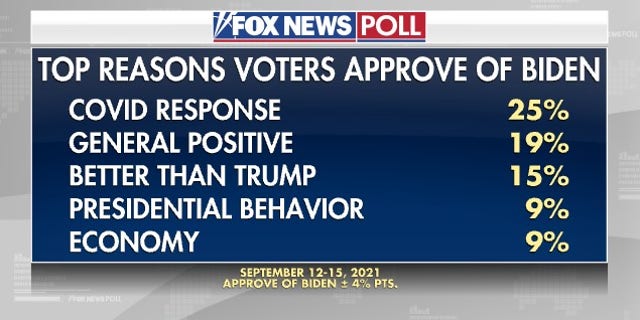 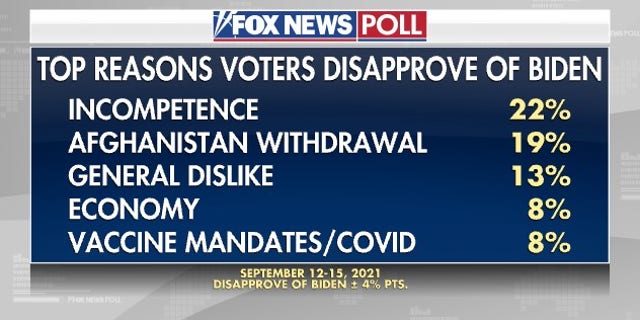 “Biden has had solid numbers so far, but his handling of the withdrawal from Afghanistan and the Delta variant has taken a toll,” says Republican pollster Daron Shaw, who conducts the Fox News surveys with Democratic partner Chris Anderson.

“It may be especially difficult for him to re-establish himself as competent and a strong leader.” 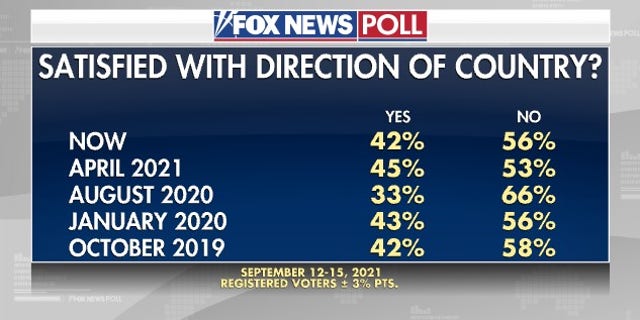 A sizable majority, 69 percent, gives the economy negative ratings (only fair or poor) and, by a five-point margin, more think the Biden administration has made the economy worse rather than better (47 vs. 42 percent).  Democrats are alone in saying better (75 percent), as majorities of Republicans (85 percent) and independents (54 percent) say worse.

Voters favor by 56-39 percent the U.S. House infrastructure bill that has spending to address climate change, health care, and childcare.  That includes support from 87 percent of Democrats, 54 percent of independents, and 23 percent of Republicans.

Conducted September 12-15, 2021 under the joint direction of Beacon Research (D) and Shaw & Company Research (R), this Fox News Poll includes interviews with 1,002 registered voters nationwide who were randomly selected from a national voter file and spoke with live interviewers on both landlines and cellphones.  The total sample has a margin of sampling error of plus or minus three percentage points.