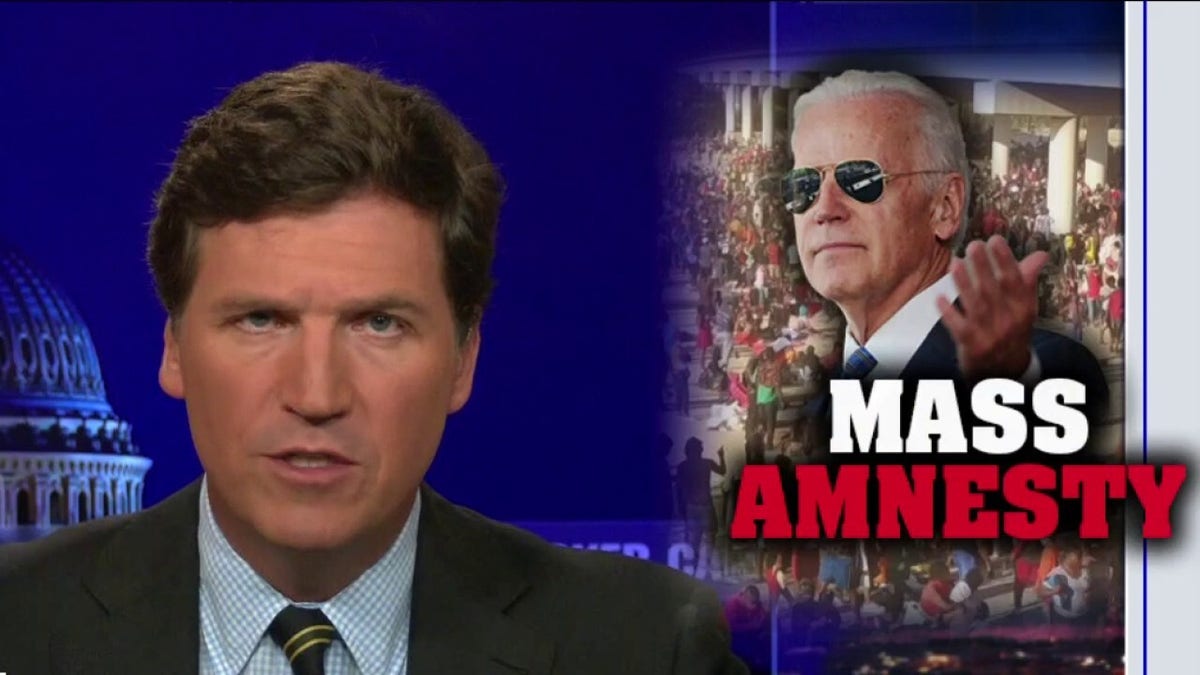 How completely out of control is our southern border in Texas? For one example, on Friday, the Border Patrol checkpoint near El Indio, Texas, directly across the Rio Grande river from Mexico, was completely unmanned. There was nobody there. You could have driven a truck full of fentanyl or illegal aliens directly into the United States without being stopped or questioned or checked or anything. No doubt, people did that. Two days later, this Sunday, the border patrol checkpoint on US Highway 57 just east of Eagle Pass, Texas was also totally unmanned. Again, no one there. Eighteen-wheelers drove right over the bridge from a country in the middle of a drug war and sped off into the interior of the United States. God knows what was in those trucks. We’ll never know. Joe Biden really has opened our borders to the world. That’s not a Republican talking point. It is completely real.

Tonight, there are many more coming. Several large groups of Haitians are coming up from various countries in Latin America, where they have been living, to come here. To be perfectly clear: These are not refugees. They are not being persecuted by any government. That’s why they haven’t applied for asylum in any of the countries between Haiti and the United States. These are economic migrants — rich enough for a plane ticket and a smartphone, but eager for the free healthcare, education, housing vouchers, food stamps and much more Joe Biden has promised them if they make it. Of course, they’re coming from Haiti and the rest of the world. You would too. They’d be crazy not to come. Once they get here, the Biden administration plans to give them voting rights. That’s in the works right now. They could very well be choosing your president at some point down the road. This manufactured crisis is an attempt to change the demographics of the United States in order to give permanent power to the Democratic Party. That’s all it is, no matter what they tell you.

The Biden administration knew perfectly well this wave was on the way. A month ago, on August 21st, the Mexican newspaper “Milenio” reported that the first wave of Haitian migrants had arrived in Mexico – 30,000 of them. According to the paper, they weren’t docile or grateful to be in Mexico. Instead, they tried to storm government facilities. “Elements of the National Guard are guarding the installations of the offices of the Mexican Commission for Assistance to Refugees, after a fight among Haitian migrants who attempted to enter these installations by force,” the paper reported on August 5. “There were verbal aggressions and tension.”

That was last month. This was the scene earlier today in Malpaso, Mexico:

MATT RIVERS, CNN CORRESPONDENT: The goal for many is to make it to a place like here, seven hours away in the town of Malpaso, where there is fierce competition to get on the buses headed north. (migrants argue) Tensions boiling over at times. Arguments erupting outside of ticketing stations. These buses will eventually take them to the U.S., which is how recent scenes of thousands of Haitians trying to get into the U.S. came to be.

Parts of our country are already very poor. Leave Martha’s Vineyard sometime, and you’ll discover that. America could be on the brink of getting much poorer. This is the last thing we need. And it was preventable, easily preventable. The U.S. holds tremendous sway over the Mexican economy. With a single phone call, Joe Biden could make sure that the Mexican government sent these migrants back where they came from. But Biden hasn’t called to do that. And he hasn’t because he wants them here, in the United States. So they’re coming. He did this on purpose.

Thousands of Haitians have swarmed the small town of Del Rio, Texas. As of this morning, there were close to 7,000 so-called “family units” under the bridge there. More than 300 of them included pregnant women. All of these migrants, says the Biden administration, will be allowed into the United States, no questions asked. The children born here will instantly become American citizens. None of these people, you should know, will undergo any kind of background check, like the background check you endure when you try to buy a .12 gauge, according to your Constitutional rights. None of them will be forced to abide by vaccine mandates. You need the shot to work as a nurse or for the sanitation department, or anywhere, but you don’t need a shot to come to our country illegally at the request of the Biden administration. 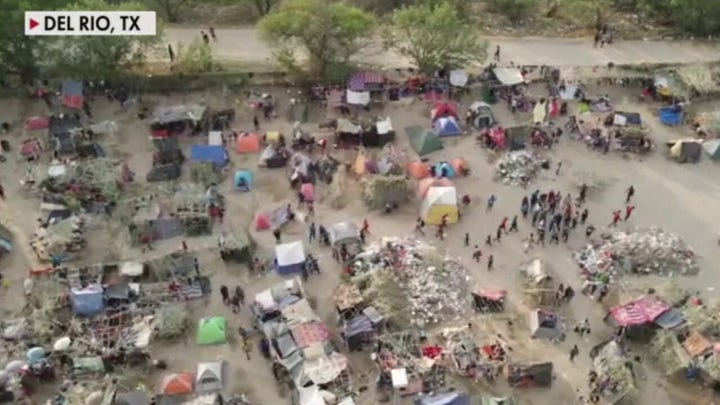 Virtually none of these migrants will ever be deported. Of the more than 3,000 illegal migrants processed in Del Rio on Sunday, only 327 were supposedly deported to Haiti, all of them single men and women. We haven’t, by the way, confirmed that. That’s just the claim. But even the official claim tells us more than 90% of these Haitians got effective amnesty immediately. They got on government buses to resettle in what was until recently your country. On Monday, Haitians on one of those buses revolted and took control of the vehicle. “They did break out of the bus, and they did escape,” one official told the Washington Examiner.

Do things seem out of control? Well, that’s because they are. Just a few hours ago, the head of DHS, the man in charge of homeland security, explained to the United States Congress that, in fact, he has no idea how many foreign nationals are being resettled in American neighborhoods. And he didn’t seem bothered to admit that.

MAYORKAS: Uhh Senator I would be pleased to provide you with that data.

JOHNSON: I want them now, why don’t you have that information now? MAYORKAS: Senator I do not have that data.

JOHNSON: Why not? Why don’t you have that basic information?

MAYORKAS: Senator I want to be accurate.

KATIE PAVLICH: BORDER AGENTS HAVE BEEN SMEARED BY WHITE HOUSE

So how could you defend this? If you believed in, let’s say, law, how would you defend what’s happening? Well, you couldn’t. There are illegal aliens, they’re not refugees. They are breaking federal law with the help of the federal government. How is that OK? No one in the Democratic Party bothers to explain how it’s ok. Instead, they deflect. They denounce anyone who asks and calls that person — can you guess? Here’s Ilhan Omar:

REP. ILHAN OMAR (D-MN):  What we have seen was cruel, inhumane, and a violation of domestic laws and international laws. … We owe Haitians the right thing of allowing them to seek asylum here. … When it comes to our immigration policy, for so many years, cruelty has been very much embedded in it. There is obviously systematic racism at play here.

Oh yeah. So it’s systematic racism to point out law-breaking by foreign nationals, says the lady who married her own brother in order to scam American immigration law. Now, somehow, Ilhan Omar is a “lawmaker” and she’s calling you a racist if you don’t like the fact that as a lawmaker, she’s openly subverting the laws of the country that rescued her from a refugee camp in Kenya. Right. That’s the new America.

And it’s not just Ilhan Omar that’s saying it. Here’s the top Democrat in the U.S. Senate:

SCHUMER: Images of Haitian migrants being hit with whips and other forms of physical violence is completely unacceptable. … Right now I’m told there are 4 flights scheduled to deport these asylum seekers back to a country that cannot receive them. Such a decision defies common sense and common decency.  … So I urge President Biden and Secretary Mayorkas to immediately put a stop to these expulsions.

These people are such liars. So here you have Chuck Schumer claiming there are, “images of Haitian migrants being hit with whips.” Well, that’s a distressing claim. Really? Where are these images? We checked and we couldn’t find a single picture like that. Instead, we saw Border Patrol officers using reins to control their horses. Horses have reins. Reins are not whips. Though, if you live in DuPont Circle, it’s possible you don’t know the difference:

GEOFF BENNETT, MSNBC:  We saw that image of at least one border patrol agent using a whip and effectively trying to lasso some of the migrants.

JOY REID, MSNBC: I was not aware that whips which come from the slave era, slavery era, were part of the package that we issue to any sort of law enforcement or government-sanctioned personnel.

CHRIS CUOMO: As an image, to me, it does smack of a bygone era, of slavery.

It’s “slavery” to ride a horse through a crowd of people trying to invade our country. That guy went to Yale Law School, in case you’re wondering if the system is legitimate.

Chris Cuomo rarely gets the credit he deserves for being the single dumbest person on cable news. He makes Don L’Mon look like a particle physicist. But the Biden administration is nothing if not attentive to CNN. They write the script. So the DHS secretary accused his own officers of “weaponizing” their horses:

MAYORKAS: One cannot weaponize a horse to aggressively attack a child. That is unacceptable. That is not what our policies and our training require. Please understand, let me be quite clear, that is not acceptable.

So, there’s one of the country’s top law enforcement officers explaining to the former morning Zoo girl from AM radio in Yakima, WA that he’s offended by the idea of enforcing the law, because laws are racist, but only racist when applied to foreigners who are likely to support the left’s program. Waiting under the bridge in Del Rio tonight is the Democratic Party’s future electoral majority. That’s what it really is, and that’s why they’re protected. So they can do whatiever they want.

But what about you? You’re an American. You were born here, you remember a free and egalitarian America, where the same laws applied to everyone no matter what color they were? What about you? Are you allowed this latitude? No. You’re merely in the way. Keep your nose clean, Mr. American Citizen. Don your obedience mask, get your shot, pay your taxes and shut up. You’re yesterday’s constituency. No one cares what you think. That is the message.

This article is adapted from Tucker Carlson’s opening commentary on the September 21, 2021 edition of “Tucker Carlson Tonight.”