Ingraham: Biden’s UN speech another chapter in his ‘relentless surrender’ of America 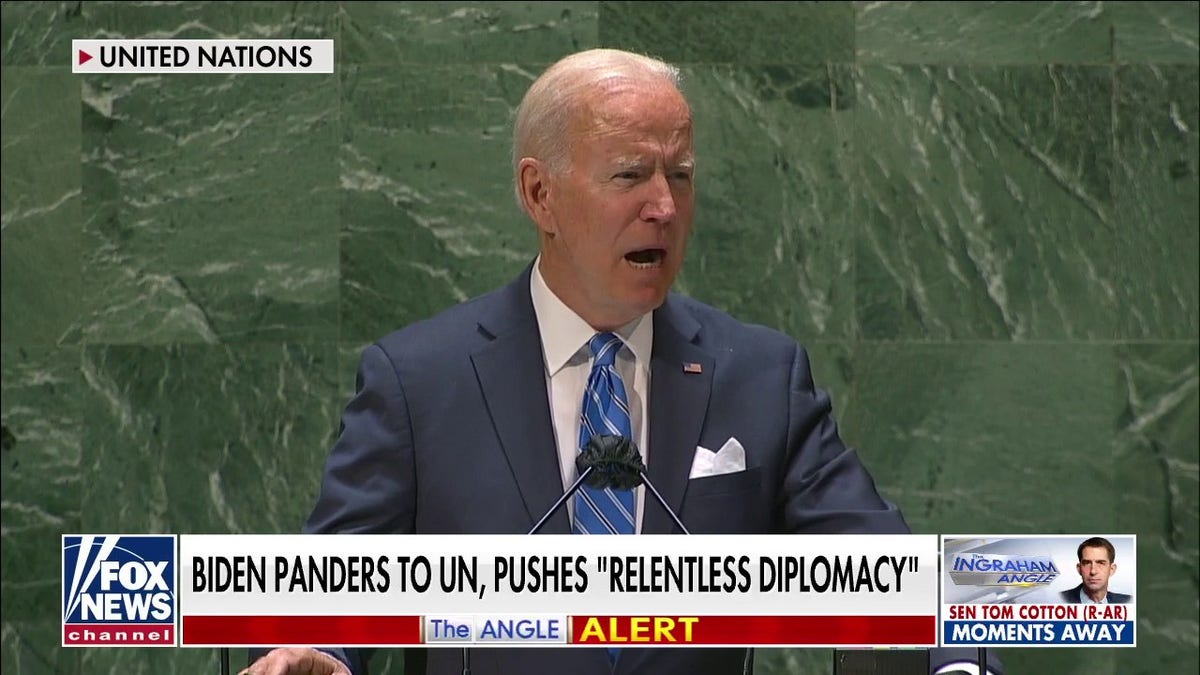 In her “Ingraham Angle” monologue on Tuesday, host Laura Ingraham said President Biden offered a bland, globalist address to world leaders at the United Nations General Assembly – and added to his continued theme of “relentless surrender”, as he put the world ahead of the United States.

She contrasted the speech with that of former President Trump, who was unafraid to call out allies and rivals alike for their shortcomings, and characteristically was always championing the United States instead of apologizing for it.

“Sure, he gave a nod to how we’ll stand up against terrorism and defend ourselves and our allies, but most of it came off as the usual internationalist mush you’d hear at a Davos panel discussion,” she said.

Ingraham added that at one point Biden spoke of “lifting people up around the world” – a statement that starkly ignored the state of the American citizenry back home, as they suffer through inflation, potential stagflation, high unemployment and thousands of newly-arriving illegal immigrants. 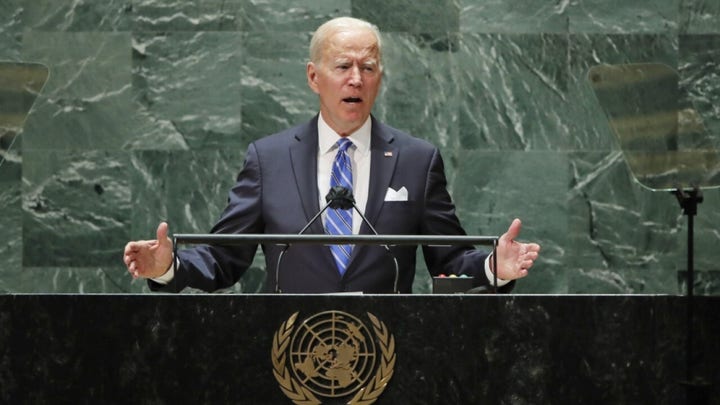 “It’s no wonder. Biden is a one-man wrecking ball of a president.  Everything he touches, every initiative he undertakes blows up on the American people – The man who pledged to solve COVID has presided over approximately 234,000 COVID deaths — and that’s with the vaccines the Trump Administration handed him,” she continued.

“Now, whenever the opportunity presents itself, they resort to threatening, punishing and isolating Americans who weren’t convinced by their vaccine lobbying.”

Ingraham added that the simple act of firing Anthony Fauci would be an easy step in the right direction.

“But none of them can really quit COVID because they like controlling people — and it’s a good excuse to force mail-in ballots next year,” she added.

Returning to the Wilmingtonian’s UN platform, she noted he gave a nod to global warming activism, as the host warned the Delaware Democrat seeks to surrender the United States to the “climate crazies” – and eliminate America’s oil and gas reliance no matter the consequences.

“[Biden wants us to] live in a world where we travel less and earn less.  Skyrocketing gas prices, inflation, tax hikes — it’s all the cost of doing business in Biden’s America,” she said.

Meanwhile, Biden, she said, ignores the crisis at the southern border, where more than 12,000 illegal immigrants, many from Haiti as of late, stream into the United States unfettered, no matter what DHS Secretary Alejandro Mayorkas claimed.

“The scenes in Del Rio look like refugee camps in Sudan.  Squalor, hunger, children crying, makeshift shelters – is this what Biden meant by Build Back Better?  It’s criminal what they are doing.

“It’s all part of Biden’s nefarious and purposeful surrender of American sovereignty.  But don’t you dare ask him about it,” she said, pointing to video from earlier in the day of Biden’s handlers angrily shooing the press from the room where he was speaking before he utters an additional word.

“On the international front, the Biden implosion is just as stark.  Beyond Afghanistan, we’re in a losing struggle with the CCP and Biden thinks he can make it all better by sucking up to them,” she said, pointing again to Biden’s address at Dag Hammarskjold Plaza.

“Biden’s relentless surrender may poll well on the other side of the pond, but he’s hemorrhaging support here. In battleground states such as Iowa, he currently has lower poll numbers than Trump had at the height of the pandemic and impeachment,” she said.

“If Biden continues down the path of relentless surrender, he’ll face a relentless red wave in 2022.”