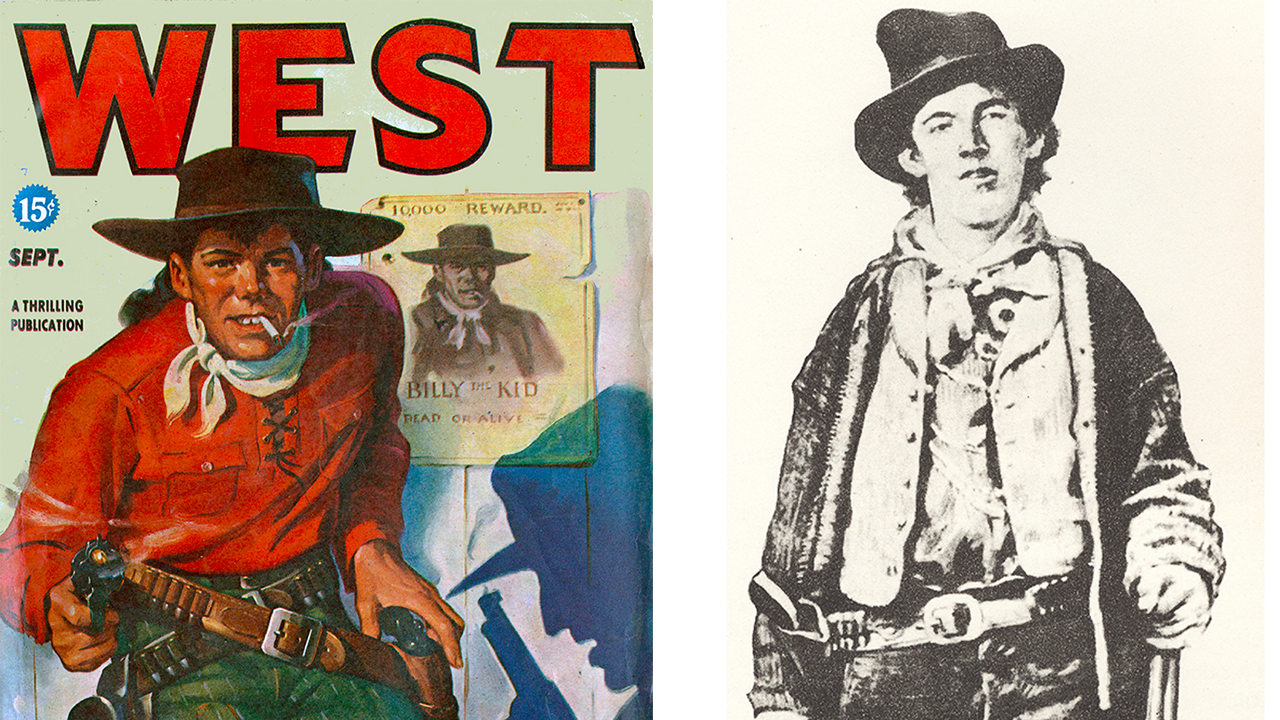 Legendary western outlaw Billy the Kid was allegedly born in New York City on this day in history, Nov. 23, 1859.

One of the Wild West’s most wanted men was most likely born in a poor Irish neighborhood on the east side of Manhattan, although much of the Kid’s early life is unknown or unverified, according to History.com.

Billy the Kid’s original name was thought to be Henry McCarthy — but he called himself William H. Bonney. The name Bonney was his mother Catherine’s maiden name, while William was the name of her longtime companion, William Antrin.

Antrin stepped in as Billy’s father figure after his biological father disappeared.

It was believed that Billy first traveled west around 1865 when he and his brother — along with Antrin and the boys’ mother — moved to Indiana and then to Wichita, Kansas, in 1870. 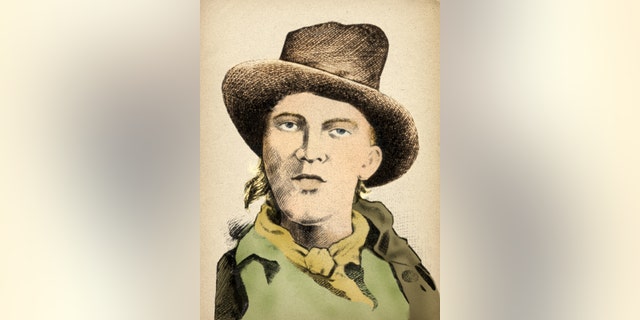 In 1873, legally married Catherine and William Antrin showed up on record in New Mexico, as History.com reports.

The following year, Catherine Antrin died of lung cancer in Silver City, according to reports.

After his mother’s death, Billy abandoned his brother and stepfather and became a ranch hand, History.com has noted. 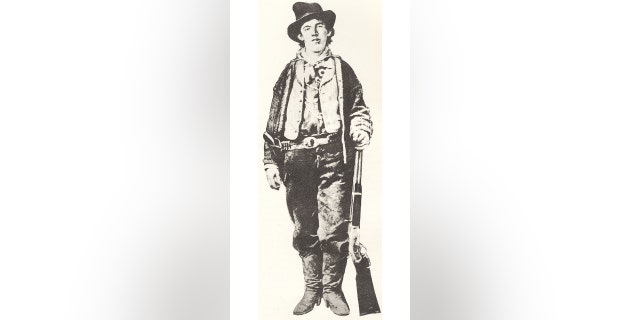 He reportedly killed his first victims, a group of Apache Indians, in the Guadalupe Mountains in 1876.

Not long after, Billy killed a blacksmith in Camp Grant, Arizona, according to legend.

The outlaw then took a job as British rancher John Tunstall’s bodyguard in Lincoln, New Mexico.

Billy and several other gunmen were hired to protect Tunstall and his property from a rival cattle gang known as “The House.” 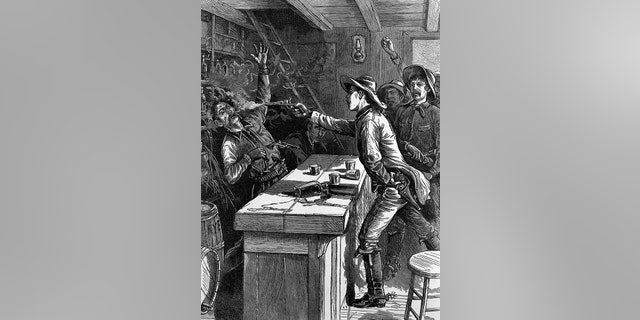 Billy the Kid, American outlaw, is depicted shooting down his foe, who had taken refuge behind a saloon bar.
(Getty Images)

In February 1878, Tunstall was gunned down by a posse organized by Sheriff William Brady, who supported The House.

In pursuit of revenge, Billy and other former Tunstall employees started the vigilante group known as “The Regulators,” History.com also notes.

The new gang murdered Sheriff Brady and spent the following weeks in shootouts with forces of The House. 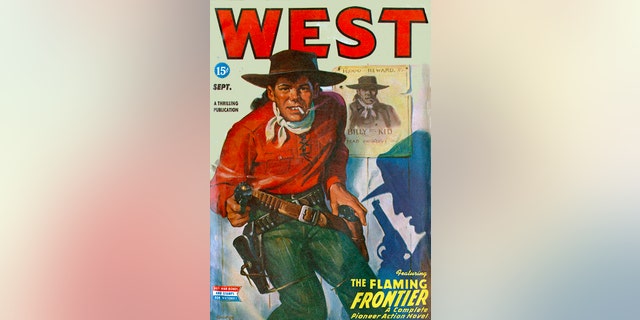 Billy the Kid was the cover subject for West magazine, published in 1940 in New York City. Henry McCarty (1859-1881) was best known as Billy the Kid, American outlaw and gunman.
(Transcendental Graphics/Getty Images)

This became known as the Lincoln County War, which concluded after a fatal, five-day firefight in July 1878 and ended in a peace agreement as The Regulators left town.

The war branded Billy as one of the west’s “most skilled gunmen,” according to history.com, but he remained wanted for the murder of Sheriff Brady.

For this, he’d spend the rest of his young life running from the law. 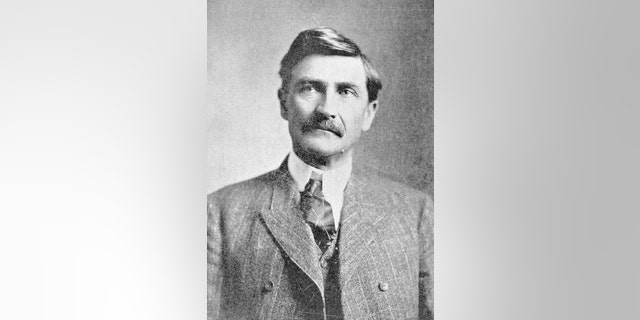 The Kid was found guilty of the murder of Sheriff Brady in April 1881 and was sentenced to hanging.

But two weeks before his scheduled execution, the outlaw outsmarted the law.

On April 28, he wrangled a gun from a jailer, shot him dead and escaped his confines in a maneuver that received national attention.

Two weeks before his scheduled execution, the outlaw outsmarted the law.

A few months later, on July 14, 1881, Garrett found Billy the Kid at a ranch near Fort Sumner, New Mexico, where he was visiting a girlfriend. 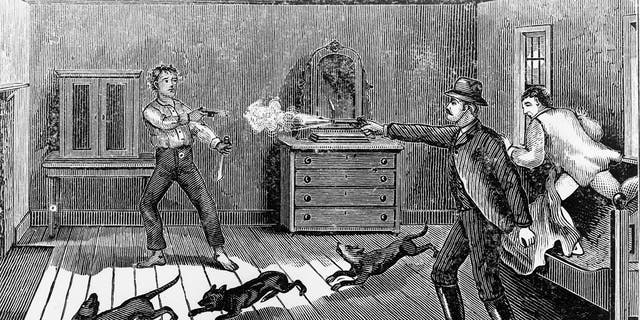 Billy the Kid (1859-1881) meets his end at the hands of Sheriff Pat Garrett in Fort Sumner, New Mexico.
(MPI/Getty Images)

Garrett surprised him in the dark of night and fired a bullet through the Kid’s chest.

Billy the Kid was dead at just 21 years old.

In the four-year span from 1877 to 1881, the Kid was involved in at least nine murders, History.com reports.

This includes a legendary gunfight in a New Mexico saloon in January 1880, when Billy shot Joe Grant dead for terrorizing the bar in a drunken stupor. 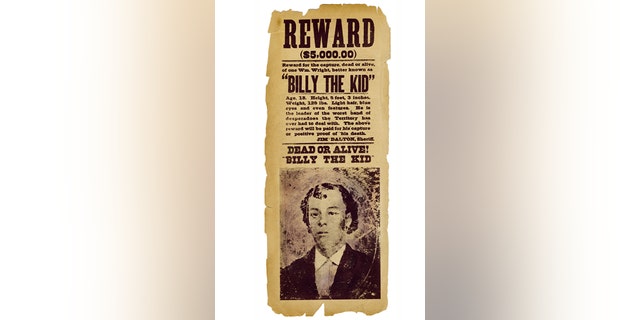 Billy the Kid is shown here in this wanted poster. "Reward for the capture, dead or alive, of one Wm. Wright, better known as Billy the Kid," the notice reads. The text goes on: "Age 18. Height, 5 feet, 3 inches. Weight, 125 lbs. Light hair, blue eyes and even features. He is the leader of the worst band of desperadoes the Territory has ever had to deal with … Jim Dalton, Sheriff." Approx. 1877. (Fototeca Gilardi/Getty Images)

Unlike other outlaws, Billy the Kid never robbed a train or a bank — but his first arrest occurred for stealing clothes from a Chinese laundry.

Many people have theorized that the legendary gunslinger never really died by Garrett’s bullet and instead went on to live under an alias.

Ever since Billy the Kid left his mark on the western frontier, the outlaw has been the subject of more than 50 films and several TV series.