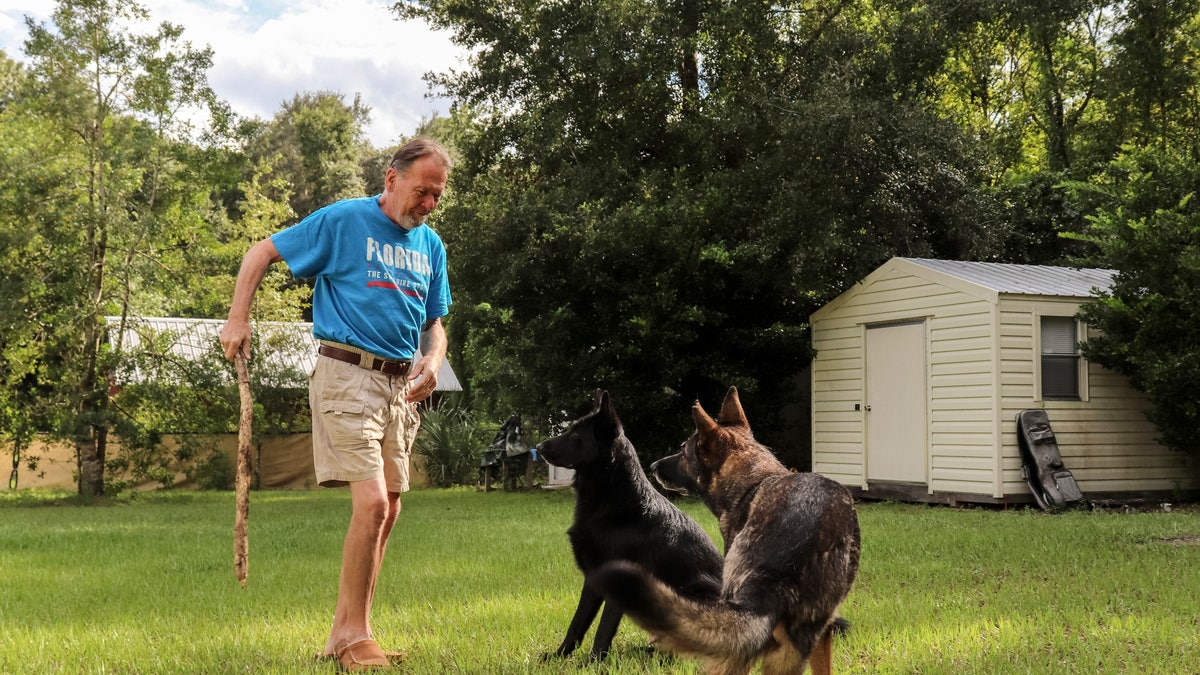 The stroke came suddenly. He didn’t remember falling, but the bump seen later on his head was evidence of his collapse. His wife was two hours away, so he was home alone and vulnerable.

The family’s 7-year-old sable German Shepherd, Ellie, bolted for help. Suffering a hereditary condition that can cause joint pain and lameness, the dog opened no fewer than three gate latches by herself before hopping like a kangaroo to a neighbor’s nearby house, barking furiously for attention.

The neighbor, Dan Burton, 51, of Gainesville, walked the agitated Ellie back to her owner’s home, realized the unfolding medical crisis and dialed 911. 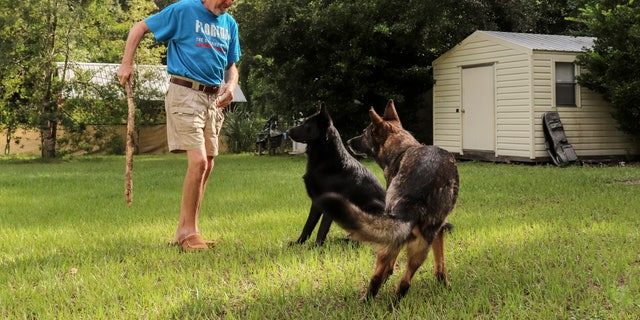 Lothar Weimann plays with his two German Shepherds, Ellie, right, and Willy, in the backyard of his home on Sept. 16, 2021, in Gainesville, Fla. When 68-year-old Weimann suffered a stroke at home in May, Ellie got through three gates and barked furiously to alert a neighbor. (Melissa Hernandez de la Cruz/Fresh Take Florida via AP)

“His dog was out, and I was bringing ’em home, and he’s just out of it,” Burton told the dispatcher, according to a recording obtained of the 911 call. “He’s not his usual self. He doesn’t know my name. It’s almost like, you know, a stroke of sorts.”

Ellie’s owner, Lothar Weimann, 68, was slurring his speech. He protested that he felt fine, failing to recognize the life-and-death stakes he was experiencing. “He’s walking around, I’m trying to get him to sit down,” Burton told the dispatcher on the call. “I think he had a fall.”

In an interview, Burton recalled the scene: “It didn’t take long to visually see that something wasn’t right.”

The case of the really good girl who may have saved her owner’s life in north-central Florida is the latest story of canine heroism demonstrating the special bond between our dogs and their masters. Behavioral experts said some breeds can detect subtle fluctuations in blood pressure or other physiological changes, but the true nature of dogs turning to heroes is a persistent mystery.

“It just goes to show that very complex and deep relationship that we can have with dogs, that they literally can look at us and get a whiff of our scent and go, ‘Well, that’s different,’” said Stephanie Roberts of Ocala, Florida, who owns Procyon Training LLC and shelter manager for the Humane Society of Marion County. “I think that’s amazing.”

In the Florida case, which happened May 27, the 911 dispatcher told Burton to ask Weimann to smile, raise both arms in front of him and repeat the phrase, “the early bird catches the worm.” Burton said even through his neighbor’s German accent, he heard him garble the phrase.

Ironically – for the safety of paramedics en route – the dispatcher instructed Burton to lock away Weimann’s dogs before they arrived. 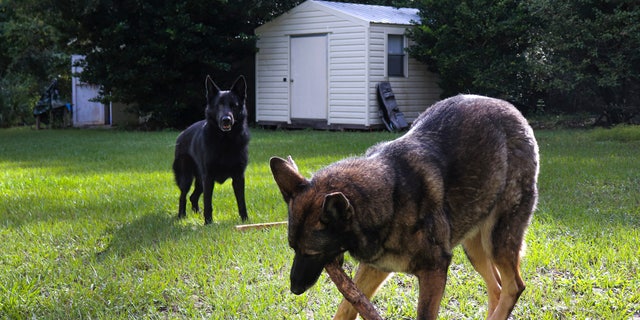 German Shepherds Ellie, right, and Willy play in the backyard of owner Lothar Weimann on Sept. 16, 2021, in Gainesville, Fla. When 68-year-old Weimann suffered a stroke at home in May, Ellie got through three gates and barked furiously to alert a neighbor. (Melissa Hernandez de la Cruz/Fresh Take Florida via AP)

Forty minutes after the stroke, a rescue truck rolled into the neighborhood. Weimann climbed aboard the ambulance himself, leaving behind Ellie and another shepherd, Willy. The rescue crew’s concise notes on official records of the emergency run described the situation as “male, conscious, breathing.”

He was at the hospital 16 minutes later.

Four months later and now released from the hospital, Weimann said doctors confirmed he had experienced a stroke. While being treated, he was diagnosed with heart problems and Type 2 diabetes, which is common in older adults and managed by losing weight, exercising and eating well. Weimann said he lost 25 pounds after his ordeal.

Looking back, he remembered coughing and feeling feverish that day, possible precursors to his stroke.

Weimann, a driver for an airport rental car company and former professional dog trainer, said Ellie and Willy regard him as the leader of their pack. Interviewed at his home, he said life has been unrecognizable since his stroke and he was still recovering, struggling to use his desktop computer or keep his balance enough to walk with his beloved dogs.

But he was alive, thanks to Ellie.

“A dog is always a very honest, very true kind of character,” Weimann said. “I will always say that dogs are the better humans. It’s good to have them around. If you have a dog, you have a companion for life.”