More Americans identify as evangelical after the Trump years 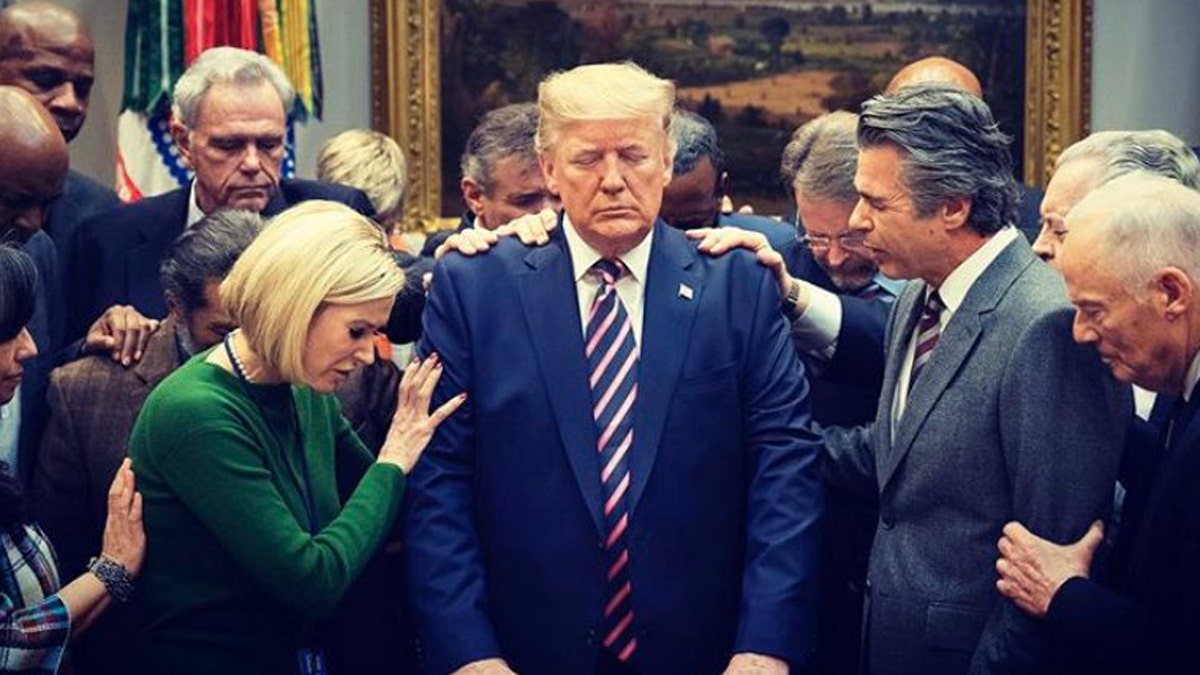 While many commentators have insisted that former President Trump has been radioactive for evangelical Christianity, pushing Americans away from the faith, recent data from the Pew Research Center suggests that more Americans adopted the evangelical label during the Trump years.

Although more of the White Americans who opposed Trump (12%) stopped identifying as evangelical between 2016 and 2020 than those who supported Trump (7%), Pew concluded that the difference was within the margin of error. 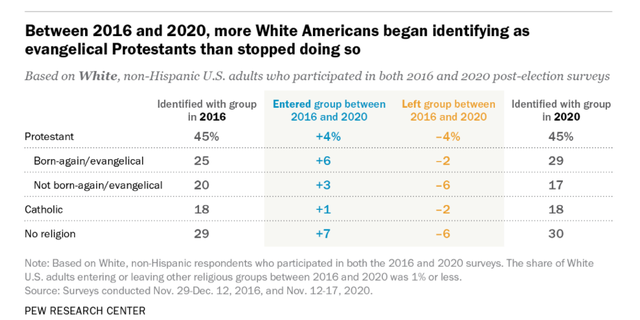 Although the poll may seem good news for evangelical Christianity, it only measured whether or not Americans identify as evangelical Christians, not whether they hold biblical beliefs or practice active discipleship following Jesus Christ. The Center for Biblical Worldview at the Family Research Council commissioned a finding that while 51% of American adults claim to have a biblical worldview, only 6% of them answered worldview questions in a manner consistent with the Bible.

When Fox News asked , president of the Billy Graham Evangelistic Association and the global charity Samaritan’s Purse, what this means for the argument that Trump’s presidency has weakened evangelical Christianity, he responded, “I don’t think the numbers support it, do they?” 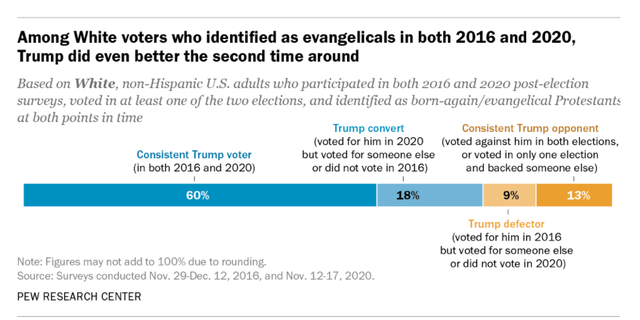 Graham, a long-time Trump supporter, noted that the former president fulfilled his promises to protect Christians, particularly in the case of Andrew Brunson, an American pastor imprisoned in Turkey who was freed after Trump imposed sanctions on the regime. He hailed Trump as a champion of religious freedom for people of all faith, including Jews, Hindus and Muslims.

“I’ve seen Democrats and Republicans in the past give lip service to people of faith, but they really don’t want people of faith around them. Trump welcomed people of faith,” he said. Graham called Trump “a great encouragement,” a “president who is willing to fight for our side.”

While the evangelical leader heaped praise on Trump, he also encouraged Christians to pray for President Biden. “He needs our prayers, and that’s for sure,” Graham said. “The Bible tells us to pray for those who are in authority. He’s in authority and we need to pray for him.”

Graham concluded by emphasizing where Christians put their ultimate hope. “Even though things look hopeless right now in some areas, I haven’t lost hope. My hope is in God, it’s not in Washington, it’s in God,” he said.

president of the Southern Baptist Theological Seminary, said the Pew poll shows the strength of evangelical Christianity, beyond politics.

“Evangelical Christianity remains a central and vital force in America precisely because it defines Christians who believe the gospel of Jesus Christ and eagerly affirm the authority of the Bible as the Word of God,” Mohler told Fox News. “This latest Pew report points to the continued strength of evangelicalism and the fact that even more Americans define themselves as evangelicals.”

“Cries of evangelical decline are fed by the theological Left and by liberal academics and media sources who are singing the same song they have sung since the 1970s. They hope that by saying evangelicals are in decline that they can make it so,” he insisted.

“The most important issue here is the fact that Jesus saves sinners — and that is the great good news that defines evangelicals,” Mohler added. “My great concern is to encourage evangelicals to be even more evangelical — committed to the Gospel of Jesus Christ. There is no life in liberal theology and, despite the great hope of the Left, there is no resurgence of liberal Christianity.”

The Rev. Adam Russell Taylor, president of Sojourners, a left-leaning Christian organization, lamented that the Pew poll suggests Americans think of their faith in political terms.

“I think what this data illustrates is the extent to which White evangelicals increasingly think of their faith in political terms as opposed to core theological or religious terms,” said Taylor, who just published the book “A More Perfect Union: A New Vision for Building the Beloved Community.” “We should resist the temptation to have our faith co-opted by politicians. The role of the church in society, as Dr. King often said, is to be the conscience of the state, not the master or servant of the state.”

“For Christians, to wrap God or the cross in the American flag, or any flag, is dangerous,” Taylor added. “We must resist trying to co-opt God into a political party or into our narrow national interests. We are a nation under God; we sometimes act as though we are a nation in which God is under us.”