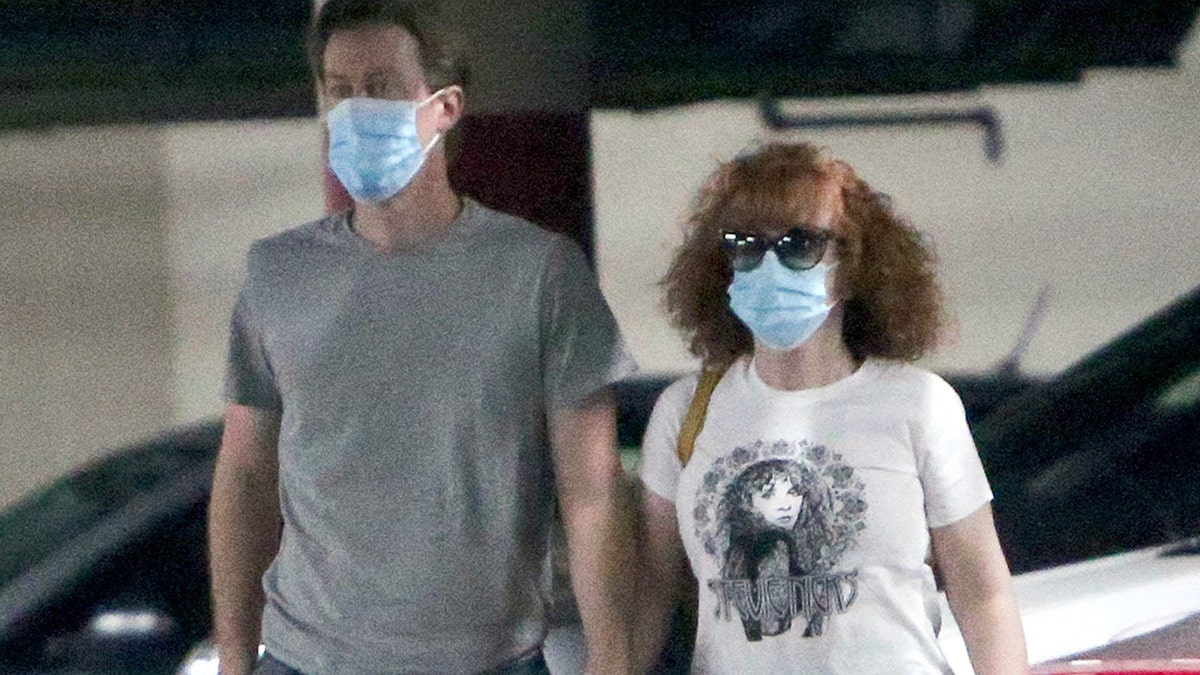 Kathy Griffin was spotted running errands with her husband Randy Bick in Los Angeles as she continues to update fans about her health status amid a battle with lung cancer.

The comedian, 60, was dressed casually in a printed T-shirt, gray pants and sneakers. She wore a mask and sunglasses but her trademark red hair was loose.

Griffin has been extremely open and raw about her cancer ever since first going public with her diagnosis back in early August.

On Thursday she told fans on social media she was scared about undergoing a “very modern” procedure in which her doctor would be putting collagen in her paralyzed vocal cord. She joked that she has never gotten collagen before and her vocal cords would look 16 years old.

Last week, Griffin penned in a post on Instagram, “One thing that sucks about cancer, it’s hard to focus on anything else when one is experiencing shortness of breath, deep coughing, pain, extreme fatigue &, in my case, vocal cord issues.”

“One thing that doesn’t suck about cancer… how shameless I am when clapping back at people dare to sass Ms. Kathy about anything. Try CANCER! I cannot get enough of it,” she said. 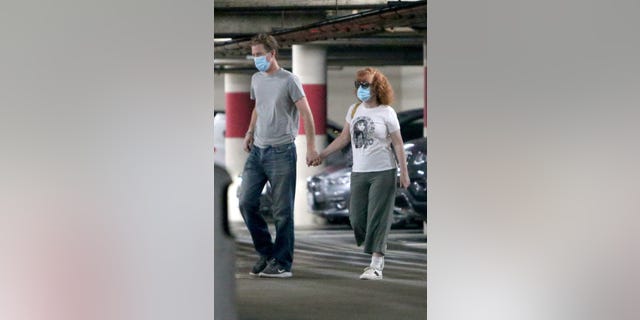 Kathy Griffin is spotted with husband Randy Bick after giving an update on her battle with lung cancer in Los Angeles, California.
(SplashNews.com)

The Emmy-winner underwent surgery last month to have half her left lung removed. Griffin explained how the stage 1 cancer is “contained” and her doctors are “very optimistic” about her recovery.

Griffin said she was a bit shocked by the diagnosis as she “never smoked” a day in her life. 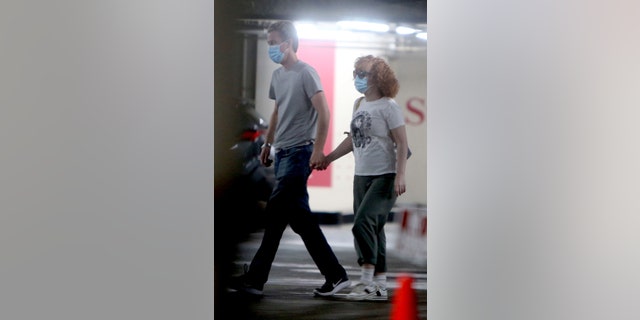 The comedian is spotted running errands, holding hands with her spouse who she married in 2020.
(SplashNews.com)

“The doctors are very optimistic as it is stage one and contained to my left lung. Hopefully no chemo or radiation after this and I should have normal function with my breathing. I should be up and running around as usual in a month or less. It’s been a helluva 4 years, trying to get back to work, making you guys laugh and entertaining you, but I’m gonna be just fine,” she said.

As a result of the surgery, Griffin’s voice has been very hoarse. “Hi, you guys. I might start to post little videos about, like, my recovery and stuff, but my voice is, like, really hoarse,” Griffin said, of course joking she hopes her deeper voice doesn’t “scare people.” 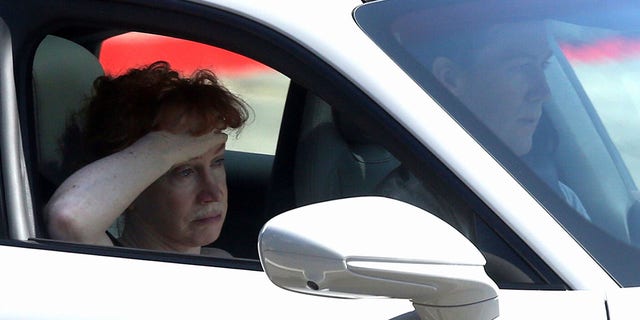 Earlier in the day, Kathy Griffin updated her fans on her social media account about her upcoming treatment.
(SplashNews.com)

In an interview with ABC News, Griffin spoke about her cancer and detailed her struggle over the past four years and the spiral her life took after facing immense backlash for posing with a bloodied, severed head with the likeness of then-President .

After and a subsequently of that apology, Griffin embarked on the cheekily titled “” tour in 2017. She noted that it was around that time that she was introduced to pills, leading to a behind-the-scenes battle that would ultimately lead to a suicide attempt.

“I thought, ‘Well, I don’t even drink… Big deal, I take a couple pills now and again, who doesn’t?’” . “Also, my age was a big part of it. I mean, who bottoms out and tries to take their life at 59? It’s almost a joke, right, and by the way, someday, this will all be comedy. Trust me… I was laughing to stay alive. And what I found is I felt like if I can’t make others laugh, then there’s no purpose for me to live. There’s no reason for me to live.” 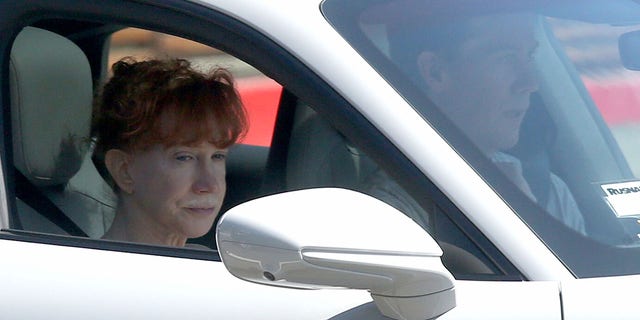 Griffin admitted she was scared about doing something "very modern" and revealed a throat doctor would be putting collagen in her paralyzed vocal cord.
(SplashNews.com)

The star said that her dependence on pills “got out of control very rapidly.”

She said that her life was dedicated to getting on stage and showing people how resilient she was. However, amid the immense backlash from the Trump photo, she revealed that she started to feel her critics were right and that there was no next chapter in her career or life. 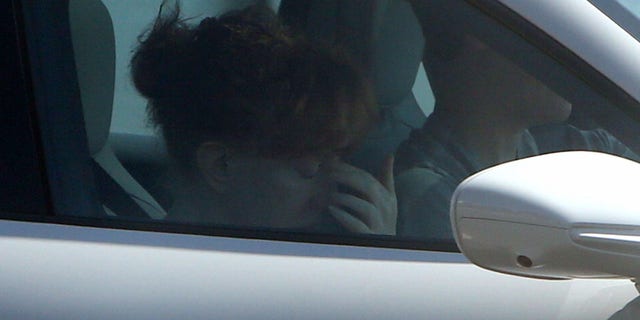 The comedian said that, as her addiction grew, thoughts of suicide became an obsession. She even went as far as to get a living revocable trust in order and wrote a full suicide note. After an attempt to take her own life, Griffin got serious about recovery. She checked into a hospital on a psychiatric hold and was released soon after to work with two clinicians who helped get her clean. 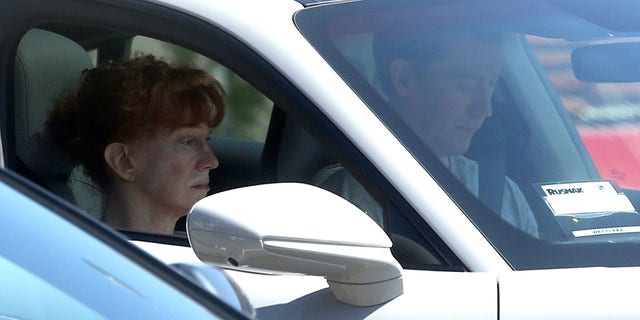 The Emmy-winner underwent surgery last month to have half her left lung removed.
(SplashNews.com)

“Here’s the silver lining,” she said of her newfound and hard-fought sobriety. “I am so thrilled and grateful. I feel like, at 60, I’m gonna get a next chapter. That’s the thing everyone said wasn’t gonna happen. I believed [it] wasn’t gonna happen.”