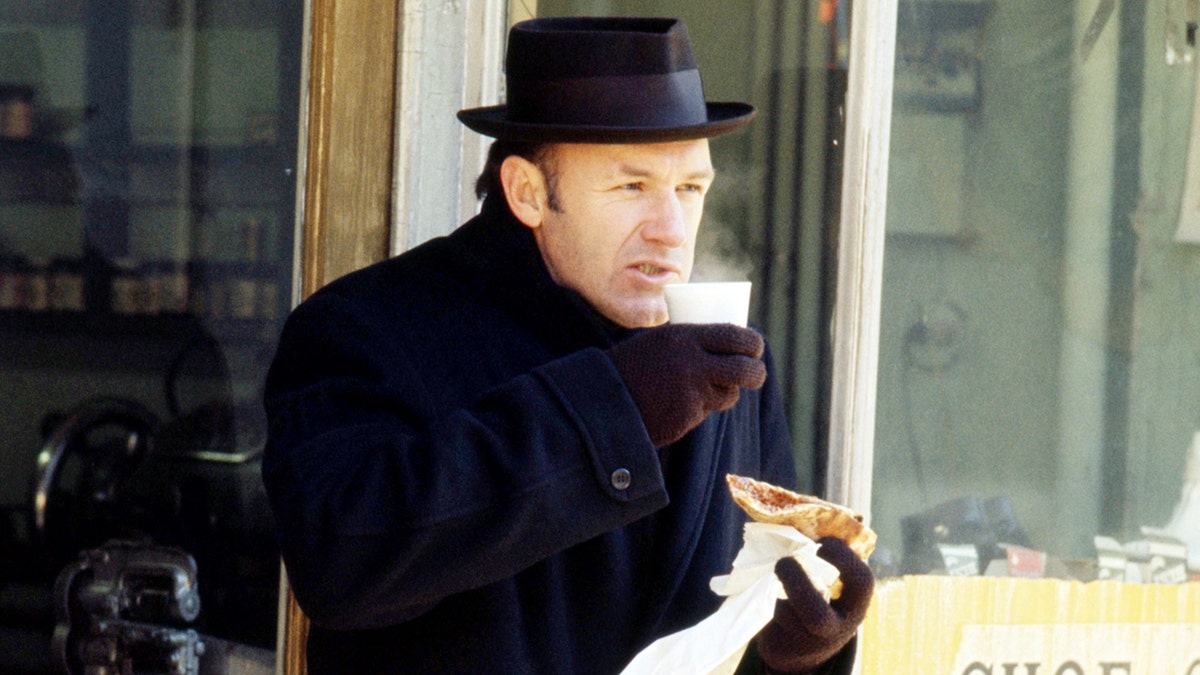 It’s the heart-stopping moment when a bashed-in Pontiac LeMans hurtles beneath NYC’s elevated subway at 90 miles an hour, dodging traffic and pedestrians in a wild race to keep up with a hijacked N train rumbling overhead. That five-minute sequence — a crash course in ‘70s guerrilla filmmaking — is now regarded by many to be the best movie car chase of all time.

However, with the 50th anniversary of “The French Connection” revving up this week, legendary actor Gene Hackman is blunt about the genuinely death-defying scene — and the lasting impact of the gritty cop drama that won him the first of his two Oscars.

“Filmmaking has always been risky — both physically and emotionally — but I do choose to consider that film a moment in a checkered career of hits and misses,” the reclusive Hackman, 91, who retired from the screen in 2004, told The Post in a rare interview — his first in a decade.

“As for the car chase, there was a better one filmed a few years earlier with Steve McQueen,” he added via email, slyly referencing his fellow film icon’s motorized Mustang stampede through the rolling hills of San Francisco in 1968’s “Bullitt.” 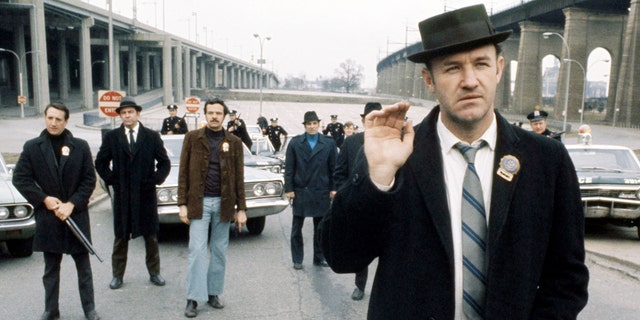 Potential East Coast-West Coast beefs aside, Hackman’s classic NYC crime thriller has secured its spot in cinematic history. But to the 26-block stretch of Brooklyn — spanning Gravesend to Bensonhurst — on which its most iconic scene was shot, the moment appears all but forgotten.

Half-a-century on, virtually every store lining the streets under that tract of above-ground subway has changed dramatically, legendary director William Friedkin, 86, told The Post. Upon returning to the area decades later, he found the corner of Brooklyn was not nearly “as funky a neighborhood as it was” when “The French Connection” premiered in theaters on Oct. 7, 1971.

Some things have stayed the same, though: Today, the nabe still feels light-years from Manhattan, and light still filters through the subway’s slats, throwing patterned sunshine onto the pavement. The world of Jimmy “Popeye” Doyle (Hackman) and Buddy “Cloudy” Russo (the late Roy Scheider), however, is long gone — but it never truly existed beyond Friedkin’s young maverick mind anyway.

“[I] created my own version of New York,” Friedkin said of his silver screen setting for the true crime story of two NYPD Narcotics Detectives who, in 1961, busted a prolific heroin-smuggling ring. 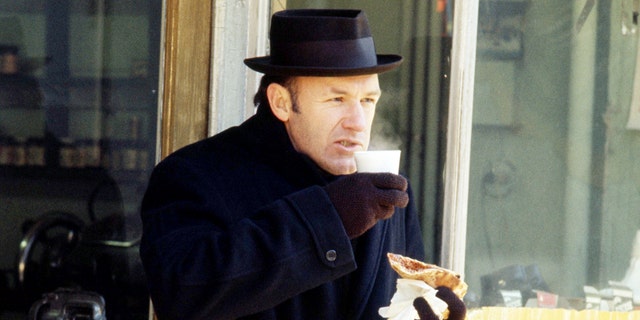 Gene Hackman said ‘The French Connection’ is ‘a moment in a checkered carer of hits and misses.’
(Photo by Silver Screen Collection)

Yes, his movie captured the “purgatorial” early ‘70s reality of the Big Apple as it rotted into bankruptcy, but Friedkin is hesitant to call “The French Connection” a period piece. Too much of the movie’s magic was manifested not by the era but his own mad vision and the fact that “I was blessed, as I was in ‘The Exorcist,’ with a perfect cast.”

Indeed, all these years later, 1972’s Academy Award-winning best director is most shocked not by how five decades have distorted his former outer borough film set, but by how insane he was to attempt many of the shots he got, shots which certainly wouldn’t be possible today — but then, they “weren’t possible then — we just did it.”

MICHAEL TYLO, ‘THE YOUNG AND THE RESTLESS’ AND ‘GUIDING LIGHT’ ACTOR, DEAD AT 73

“I was like Captain Ahab pursuing the whale. [I had] a supreme confidence, a kind of sleepwalker’s assurance,” Friedkin said, reflecting on his helming halcyon days. “As successful as the film was, I wouldn’t do that now. I had put people’s lives in danger.”

That car chase scene, for one, was shot illegally. 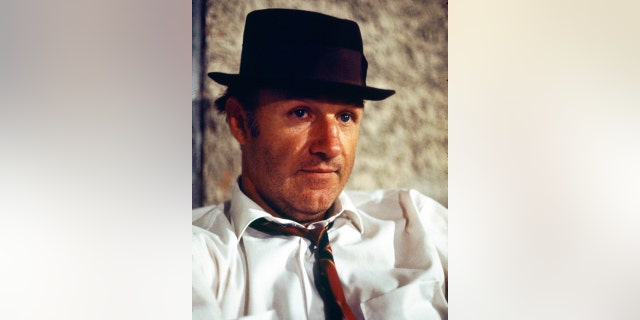 Gene Hackman, 91, opened up about ‘The French Connection’ on the film’s 50th anniversary.
(Photo by Silver Screen Collection)

Randy Jurgensen — the famed NYPD detective who later consulted on Friedkin’s controversial “Cruising” and “Donnie Brasco” — was crouched in the back of the Pontiac, ready to show his badge to anyone who asked, while Friedkin himself (he stepped in so the cameramen, who all had families, didn’t have to put their lives on the line) and camera operator Enrique Bravo (an extremely steady hand who’d traveled with Castro filming the Cuban Revolution) shot stuntman Bill Hickman careening thorough the underpass using three cameras, all hooked up to the Pontiac (“We couldn’t afford a camera car.”)

Friedkin did, however, manage to secure permits to shoot on the train itself — for the price of $40,000 and a one-way ticket to Jamaica.

“‘If I give you permission to do this, I will be fired,’” the city official allegedly explained to Friedkin at the time, when the director asked why he didn’t want a return flight.

In another moment of vision-motivated lunacy, Friedkin recalls telling Jurgensen, “In about 45 minutes I’m going to be ready to shoot a traffic jam on the Brooklyn Bridge, and he said ‘I understand’” before getting various off-duty policemen to drive onto the bridge, stop and create the traffic jam seen in the film. When a police helicopter came over to investigate, Jurgensen simply showed his badge. “They were furious,” recalled Friedkin — but they disappeared. “I would not do anything like that today,” he noted. 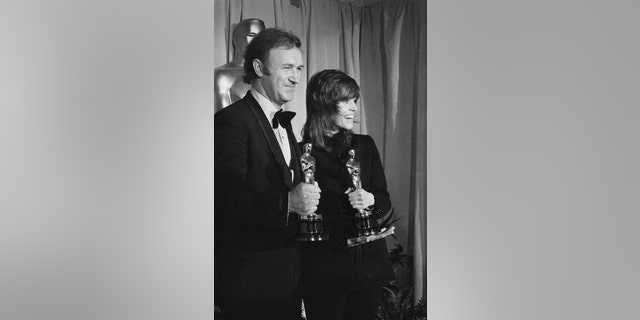 The best actor and actress for 1971, Gene Hackman and Jane Fonda, hold on tightly to their just presented Oscars at the 44th annual Academy Awards at the Music Center. Hackman won for his starring role in ‘The French Connection,’ while Fonda won for her role in ‘Klute.’
(Getty Images)

In all, it was something of a miracle the movie had no casualties.

“It was only by the grace of God that nobody was hurt or injured in any way — or died because of that,” Friedkin said.

In honor of the film’s 50th, Jurgensen — “the last living ‘French Connection’ detective” — will be attending a November celebration put on by ​​the Academy, and last month had a large Italian dinner in Queens with a group of men who all appeared as extras in the film, he told The Post. Friedkin said he “might show up” at one of the planned anniversary screenings, too.

As for the movie’s star, Hackman has never bothered to rewatch “The French Connection” and has no plans for its anniversary. “[I] haven’t seen the film since the first screening in a dark, tiny viewing room in a post-production company’s facility 50 years ago,” he told The Post, adding that “if the film has a legacy, I am not sure what that would be. At the time, it seemed to me to be a reverent story of a cop who was simply able to solve and put a stop to a major crime family’s attempt to infiltrate the New York drug scene.”

The reclusive actor, who ditched Hollywood to bask in the sunsets of Santa Fe with his classical pianist wife Betsy Arakawa, 59, does allow that the film — featuring what’s considered by many to be his greatest performance as boozing, bigoted Popeye — is a highlight. “The film certainly helped me in my career, and I am grateful for that,” said the man who went on to star in a string of cult classics and mainstream hits, including “The Conversation,” “Superman,” “Hoosiers,” “Unforgiven,” “The Birdcage” and “The Royal Tenenbaums.”

Meanwhile, the biggest tribute to “The French Connection” on its landmark anniversary is perhaps its enduring popularity — a pleasant surprise to Friedkin, who openly admits he never anticipated his flick would have such a lasting impact.

“I think we’ll get away with this,” Friedkin remembers telling his producer when shooting wrapped. “But don’t get your Oscar speech ready.”

As for his personal opinion on how today’s viewers should interpret his cinematic marvel, Friedkin said “I think the takeaway is it’s a pretty damn good action film.”