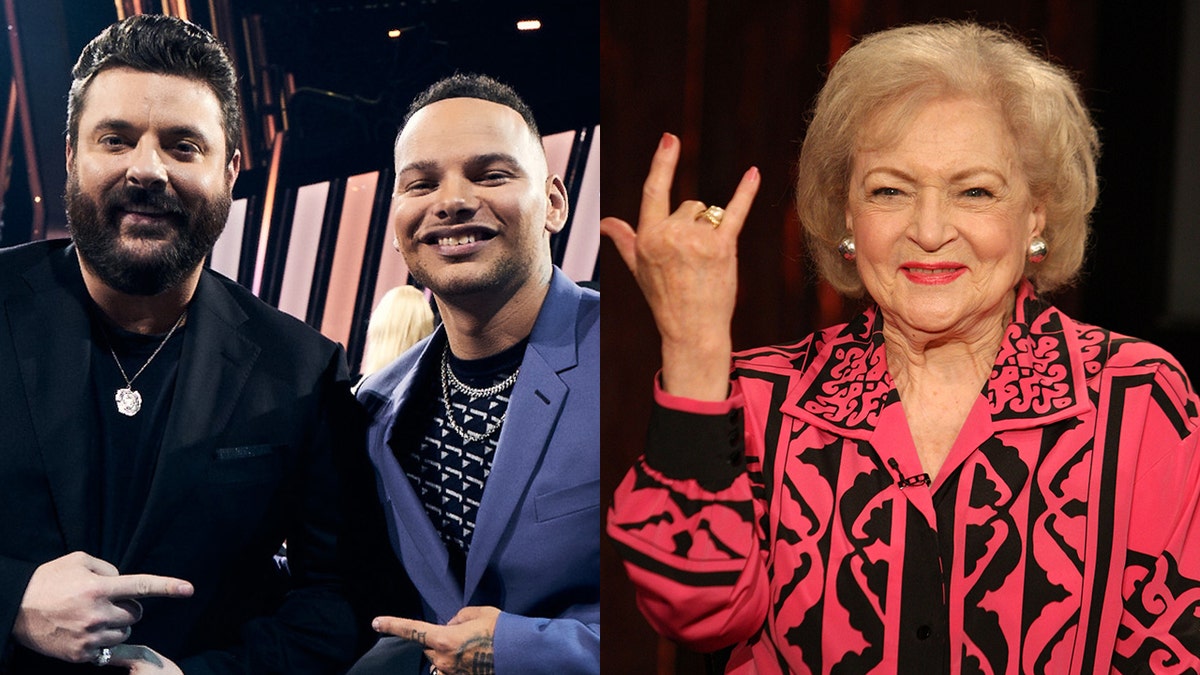 Betty White‘s lasting impact on the lives of those who adored her is readily apparent in any conversation centered on America’s “Golden Girl.”

Country music stars Kane Brown and Chris Young reflected on the late actress’ legacy in the wake of her death on Dec. 31 at age 99  — weeks before she would have turned 100.9

The “Famous Friends” collaborators praised White for her wit and ability to “bring happiness into everyone’s lives.”

“I think for me personally, I watched her on TV, I watched her in movies, and she just always seemed like one of those people you wanted to get to know, and she made me laugh,” Young, 36, told Fox News Digital. 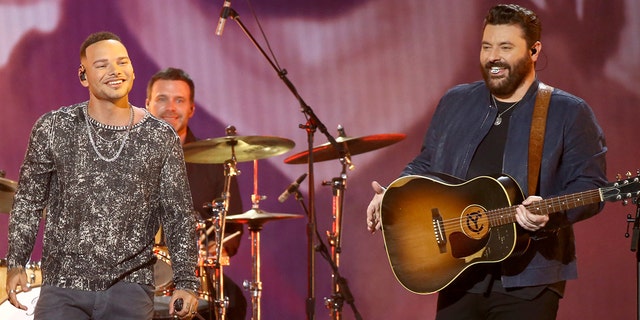 “I think that’s something that’s greatly overlooked on a regular basis — how important it is for someone you may not have ever met to be able to bring happiness into your life through art, whether that is acting, music, anything else, and she was definitely somebody that left a lasting legacy of that for sure.”

Brown, 28, recalled watching “The Golden Girls” with his grandmother and marveling at the pace in which White lobbed witty jokes and anecdotes, adding that he admired White for her penchant for going off-script.

“I didn’t really know much about her. I was a little younger, but I do remember watching her on the ‘Golden Girls’ with my Nana. She would always have them on TV,” he explained to Fox News Digital alongside Young.

“I never really paid attention that much, but when I did, I always saw her wit and candor and looking back at these clips after she passed away. My favorite thing about her is just not caring what the script is, what I’d have to say,” he continued. “Even her age demographic. Whenever she was messing with Ryan Reynolds, she’s just so funny and that’s what I love to see. She never lost her sense of humor, and I just hate death in general, so it just sucks to lose anybody, especially somebody that, as Chris [Young] was saying, can make you laugh or brighten your day.” 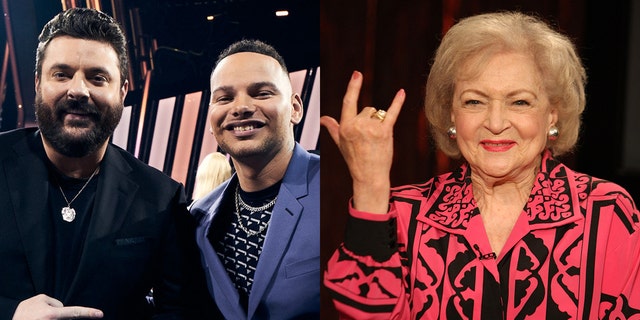 During their conversation with Fox News Digital, Kane and Young also opened up about their relationship with technology, and through their community partnership with UScellular, how it empowers us to connect with our loved ones near and far.

For six weeks, beginning January 10 through February 20, 2022, Brown and Young are putting their efforts behind the “Locally Grown. Locally Live” campaign which highlights seven emerging musicians and musical groups from across the country and sweepstakes for winners to attend a live concert and have an exclusive meet-and-greet with the country music standouts.

Young, who got caught his big break similarly back in 2006 as the winner of “Nashville” Sta,” said he couldn’t imagine a better opportunity to extend an opportunity to other up-and-coming musicians who long for their shot at success.

“To have that platform and get the attention that I got from RCA Records and sign a record deal there, being able to take that and give back, I think, is one of the cooler parts of the job of being a musician,” he explained. “When you get to the point where you have this large platform, and you get to play huge arenas and amphitheaters and these huge shows — I just think that’s so cool. And it’s one of the things where you can use your platform to give somebody else a leg up as an artist.” 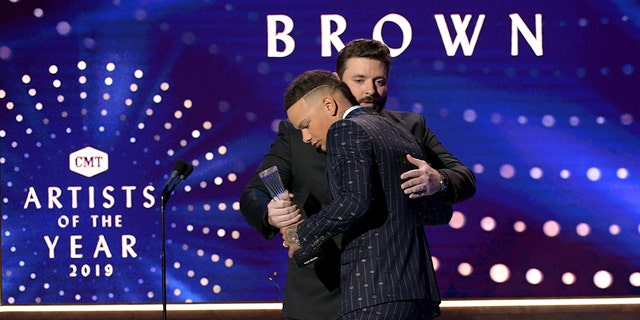 Chris Young presents an award to honoree Kane Brown onstage during the 2019 CMT Artist of the Year.
(Photo by Jason Kempin)

Brown went on to explain that his history with technology runs deep and even recalled how old he was when he got his first cell phone — and quipped that growing up in a cash-strapped household, his mother fumed at him when he went over on his bill.

“I don’t remember how old it was. I remember I was in the sixth grade when I got my first cell phone. It was a BlackBerry, and it was amazing,” said Brown. “I didn’t know that text messages cost you back then, so I remember I went over my bill $500, and I grew up basically in a poor family, so I remember my mom almost shot me. It was crazy.”

“I think the way technology is now is just insane,” he continued. “It’s further than I would have even imagined it. I mean, if I can’t find my phone or if my phone is not beside me and I don’t know where it’s at,  I thought I lost it, I feel like I’ve almost lost my life. Your whole life is on your phone and I wouldn’t know anybody’s numbers around me, I wouldn’t be able to get ahold of Chris, I wouldn’t be able to get hold of my wife or anybody if I didn’t have my phone.”

Young said he was a late-bloomer so to speak and didn’t have his first device until he was in college. 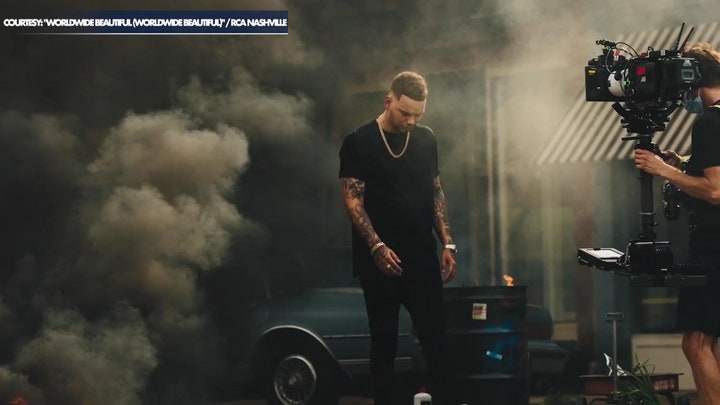 COUNTRY STAR LAUREN ALAINA ON HER BOND WITH GARTH BROOKS, TRISHA YEARWOOD: ‘I’M SAVED IN HER PHONE AS JUNIOR’

“My sister and I were both in high school at the same time. We’re very close in age, a little over a year apart. We also didn’t have a whole lot when I was growing up, so she got a phone in high school, but they just kind of were like, ‘You’re the boy of the family, you don’t need one yet,’ So I actually didn’t get my first cell phone until I was in college. I was one of those kids who graduated when I was 17. I didn’t turn 18 until I was in college, so I didn’t have a cell phone until I was 18.”

“I’ve got guys in my band and crew — they’re much older than either one of us, and there’s a couple of guys in their 60s — and one of the guys was like, ‘I remember having to pull over and use a payphone to call back and get work done,'” Young pressed.

“And just the ease of use for a lot of things being able to approve stuff, being able to now send — if I could go back in time and show myself like what I can do on a phone now and just being able to have that capability, especially work-wise — I would just be blown away, and it enables us to do our job. So it’s something that’s really important.”